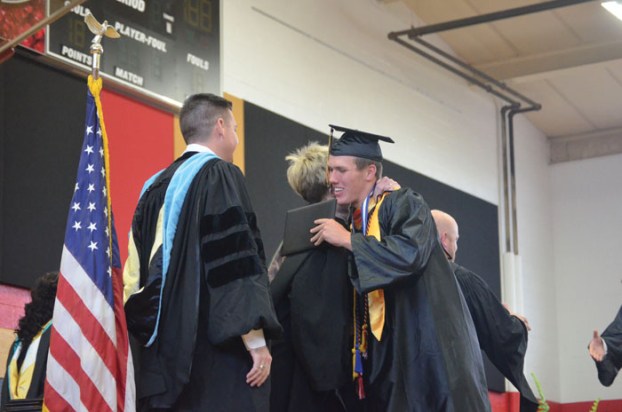 Jackson Fisher gets a hug after he receives his diploma during Salisbury High School's 2019 graduation, which was held Saturday inside the gymnasium following a week of rain. There were about 205 students who graduated. Shavonne Walker/Salisbury Post

RSS promises seniors will have a graduation ceremony

SALISBURY — Gov. Roy Cooper’s announcement that schools will remain closed until May 15 came one day after a number of principals reassured high school seniors that they would have a graduation ceremony of some sort, but school district officials are standing by those assurances.

If students return to schools after May 15 there will still be time for graduation ceremonies. Meanwhile, Rowan Salisbury-Schools Superintendent Lynn Moody said the district is prepared to promote students to the next grade after the nationwide nixing of end-of-grade examination requirements this year and because the district is already teaching remotely.

Moody said the district prefers to teach in buildings because of the higher quality of instruction but that learning will not stop.

“We were already playing the long game,” Moody said.

The district had already held eLearning days where students used devices issued by the district to learn from home. What’s happening during closures is an extension of that program. Some districts in the state have been unprepared to continue education out of the classroom.

However, if the closure is extended again it could affect graduation ceremonies that would normally be held in June.

The Monday closure extension has already affected prom as well. Salisbury High School’s prom was scheduled for April 25, and on Sunday, before the announcement, Principal Luke Brown challenged his students to research and come up with an innovative way to have prom or possibly move the event to sometime in the summer.

“Kind of planning for the worst, but hoping for the best scenario,” Brown said.

Brown said the prom and graduation are top priority for administrative staff, and he wants students to know that.

“I think maybe people take for granted the social/emotional stress school being closed places on our kids,” Brown said.

Moody said prom may happen if schools reopen or students may create an entirely new way of having prom. She said some schools are having a virtual spirit week. With students learning and teachers giving instruction from their homes, Hurley Elementary School fittingly had a virtual pajama day on Monday.

East Rowan High School was in the midst of launching its virtual academy when the closure was announced. Principal Tonya German said she has thought a lot about the irony of preparing for the academy’s first year right as the district was forced to move instruction online.

“This is definitely not how we wanted to launch a virtual academy,” German said. “It was not in anybody’s plan.”

German said the school wants to honor juniors and seniors by having a prom, even if it becomes virtual, and will be speaking to some student leaders about options for the school.