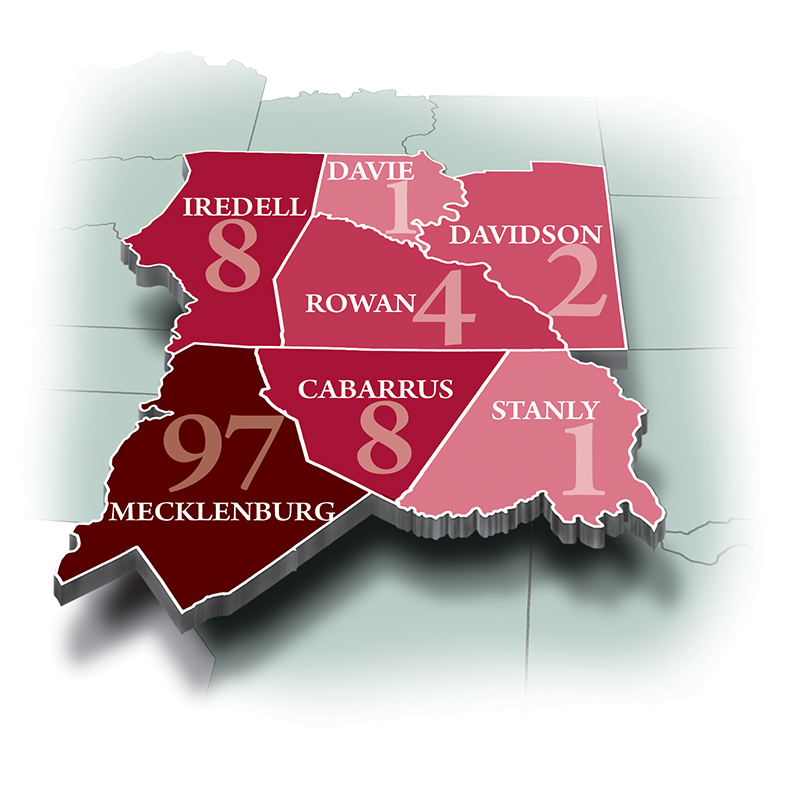 Graphic by Andy Mooney/SALISBURY POST - This map shows the number of coronavirus cases in nearby counties on Monday afternoon using information from local health departments, news reports and the N.C. Department of Health and Human Services. Once per day, the state updates the case count for all counties at ncdhhs.gov/covid-19-case-count-nc

Little else was released from the county about the most recent confirmed cases, which comes just days after the county reported its first and second positive cases were reported.

Livingstone College said the first case in the county was one of its students who has since returned home — located out of the county. A local man named Doug Loeblein, who spoke to the Post in a story published Sunday, has also tested positive.

As of Monday morning, the North Carolina Department of Health and Human Services said there were were 297 confirmed cases of COVID-19 in 45 counties across the state and 8,438 tests taken. About 10,000 tests are waiting for results, Gov. Roy Cooper said in a Monday news conference in which he also extended public school closures to mid-May. Businesses that require close social interaction to include nail and hair salons as well as barbershops have been ordered to close no later than 5 p.m. on Wednesday, March 25. Other businesses, including gyms, were also ordered closed to remain compliant with a ban on gatherings of more than 50 people.

In Rowan County, officials have made some operational changes following Cooper’s executive order, including limiting access to the Rowan County Health Department building to badge-access-only doors on the side of the building and halting walk-in appointments.

The Health Department said it would also start performing COVID-19 screening for staff members and every client who comes for an appointment. Dental care is available in emergency situations only and family health services have been limited.

The Rowan County Department of Social Services remains operational. There are several programs that must continue, including Medicaid applications and determinations, Food and Nutrition Services applications and determinations, Child Support and Refugee Assistance. But the county promoted online methods for services, including using a smartphone to take pictures of some documents for verifications needed by caseworkers. Those already receiving benefits can call 704-216-8330 to be directed to their current caseworker.

The county also said animal shelter adoptions could occur only by appointment and that indoor walking for the purpose of exercise has been “suspended” at West End Plaza.

Full details about the county’s new limitations are available at rowancountync.gov.

Health care professionals and county staff are urging local residents to contact their personal doctors or the Rowan County Health Department via its coronavirus hotline at 980-432-1800 for questions or inquire about testing.

Novant Health, which operates Rowan Medical Center,  plans to open a drive-thru screening center today at 315 Mocksville Ave., but people who have no symptoms will not be tested and should not visit a screening center, a news release said.

“Visiting a screening center unnecessarily will only further one’s risk of exposure and put a strain on resources for those who need it most,” the news release said.

The health care system has set up a hotline of its own at 877-9-NOVANT.

As one of county’s largest employers suspends operations, officials…