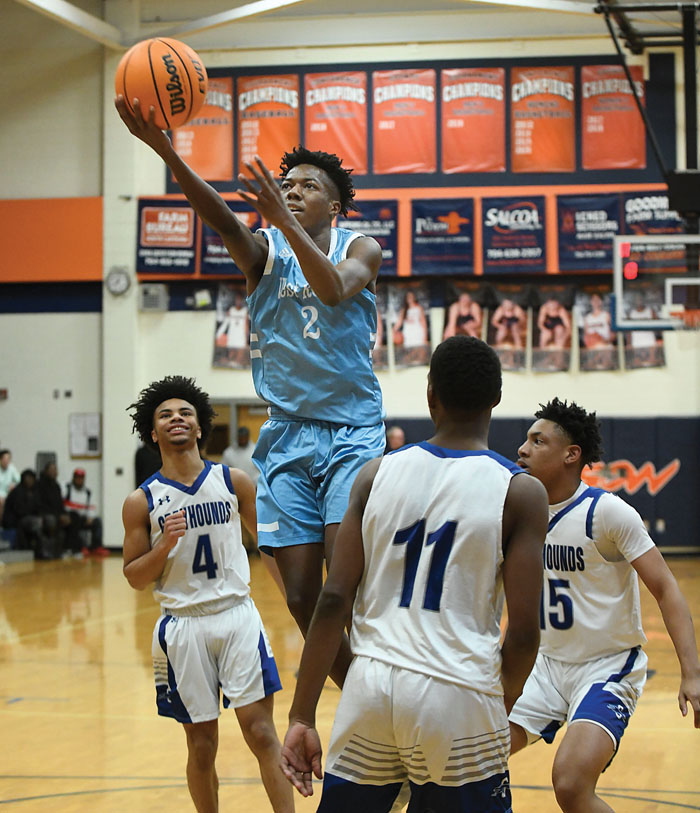 West's Jalen Moss in a game against Statesville on Feb. 21. Photo by Wayne Hinshaw, for the Salisbury Post

MOUNT ULLA — There was no shortage of candidates for Rowan County Player of the Year for boys basketball.

Salisbury senior Zay Kesler was the best player on the best team. South Rowan junior Braden Graham was the county’s leading scorer (he edged Carson’s EJ Clark), but he played for a 4-21 team. Clark was the clear POTY favorite at mid-season, but the Cougars struggled late in the season and junior teammate Javon Smith arguably was better in the league games.

North Rowan sophomore Brandon White showed the highest ceiling at an athletic 6-foot-10 and played for a 22-win team, but he was still a work in progress, a year away from being consistently dominant. West Rowan senior Chaz McCombs brought unlimited intangibles to the table, but his tangible averages — 13 points and 7 rebounds — were modest for a player of the year.

But then there was West’s 5-foot-9 junior Jalen Moss.

Moss isn’t tall or imposing, but he checked a lot of boxes. He scored efficiently and scored a lot (17.0 points) and looked good doing it. He topped 20 points in five games against county opponents, including a 35-point outburst against Carson. He got plenty of assists and steals. He played on a winning team (15-10) that won a championship (North Piedmont Conference Tournament). Just about every coach at least mentioned Moss when asked who the best players in the county were.

One head coach, the only one who didn’t have a dog in the fight (East Rowan’s Trey Ledbetter), said Moss was clearly the best guy in the county, was without a doubt the best guy. That carried some weight.

“He was the most valuable to his team — I think West would have been below .500 without him,” Ledbetter said. “He was the best player and the best athlete in the county. He was the fastest guy in the county with the ball in his hands. He filled it up.”

Jalen Moss arrived at West for the second semester last season along with his brother Bryson Moss, who was a senior. Due to illness, the younger Moss only played in a handful of varsity games as a sophomore, but he experienced some success against Statesville and East Rowan and scored 21 in a loss to Carson.

“He had some pretty good games, showed flashes, but then he got sick and missed several games,” West Rowan head coach Mike Gurley said. “But he impressed me as a guy that wasn’t looking for the limelight. He was a guy who just wanted to play. We expected him to be good this year.”

Moss didn’t waste much time showing that he would be good. He scored 25 on opening night against A.L. Brown, then 22 against North Rowan. He had 23 against Mooresville and 20 in the Christmas tournament against Salisbury.

Seven games into the season, he was averaging 20.3 points per game.

“I had a lot more focus this year,” Moss said. “Coach Gurley did a good job of pushing  me in practice.”

Gurley said Moss has contributed to changes in his coaching philosophy.

Gurley has always coached his players to shoot the pull-up in the lane rather than the floater, but Moss’ floater is so accurate that Gurley has encouraged him to just keep doing what he does.

“I’ve learned over the years that sometimes you’ve just got to sit back and watch and let the kids play,” Gurley said. “He shoots the floater great, so go ahead and take it.”

West knew what it had and what it could do in January. Moss poured in 79 points as the Falcons took their first four North Piedmont Conference games. West lost a first-place showdown with talented Statesville on Jan. 28, but Moss was special that night in Mount Ulla with 28 points.

“We figured out that Moss and Macari Allison were our scorers, that Moss and Quay Weeks were our ball-handlers, and that Moss and Chaz McCombs were our defenders,” Gurley said. “Moss was involved in all of it. When we won, he was really good. When he didn’t win, he was still good.”

“His quickness is just something else,” Gurley said. “He can handle it and he can shoot it and he can get from Point A to Point B a lot faster than most people.”

Moss played both ends of the floor as well as anyone. That’s one of the things Ledbetter pointed out.

“He never disappeared,”Ledbetter said. “Even when he was scoring, his defense was stifling.”

The highlight of West’s season came in the victory in the NPC tournament championship game at Carson against top-seeded Statesville, a team that had beaten the second-place Falcons by 16 and 22 during the regular season. Gurley challenged Moss before that game. Moss responded.

“I played that one for my coach,” Moss said. “We wanted it for him. He hadn’t won a conference tournament in a long time.”

Not since 2011, to be exact, a season in which the Falcons edged Statesville in the title game.

“Moss was a stallion against Statesville, “Gurley said. “He came out and made a statement in that first half that we were there to compete. It was really the first time this season that we’d competed with Statesville. “Our other guys fed off him. McCombs saw how Moss was playing, and it was like, ‘OK, here we go. We can do this.'”

“Our biggest win in 10 years,” Gurley said. “Moss played his butt off.”

Moss doesn’t say a lot. Gurley said when he informed him that he was the player of the year, he just grinned.

“He’s humble and he’s not going to say a lot about it, but he’s appreciative,” Gurley said. “He understands what an honor it is.”

Moss has started thinking about next season. He knows he’s got to continue to add things to his game because he won’t take anyone by surprise next season. He’s going to see the opponent’s best defensive guard every night.

“Being player of the year surprised me,” Moss said. “It means I have to try to be better next year.”

Sports obit: Joe Ferebee was one of the giants