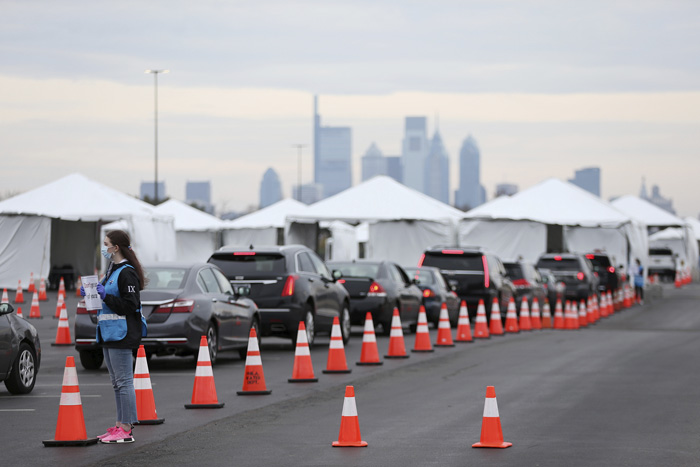 Philadelphia Medical Reserve Corps volunteer Emma Ewing, left, a sophomore at Temple University, directs cars at the city's coronavirus testing site next to Citizens Bank Park in South Philadelphia on Friday, March 20, 2020. The site, which opened Friday afternoon, is the first city-run drive-through location where people can be swabbed to determine if they have the coronavirus. At the time of opening, it was only for people with symptoms who are over 50 and healthcare workers with symptoms. (Tim Tai/The Philadelphia Inquirer via AP)

The death toll from the global pandemic surpassed 10,000 people worldwide and the effects of a global economy grinding to a halt because of the pandemic were beginning to show, from millions of unsold flowers rotting in piles in Kenya to the slow emptying of the world’s skies. In Southern Europe, gasping patients filled sick wards and field hospitals went up in hotels and a convention center in Madrid.
The U.N. chief warned of a looming global recession “perhaps of record dimensions.” California Gov. Gavin Newsom ordered the state’s 40 million residents to stay at home indefinitely and venture out only for essential jobs, groceries and some exercise. At the other end of the country, New York Gov. Andrew Cuomo issued a similar order, starting Sunday, that all workers in nonessential businesses must stay home and all gatherings of any size will be banned in the state of more than 19 million people.
Here are some of AP’s top stories on the world’s coronavirus pandemic. Follow APNews.com/VirusOutbreak for updates through the day:
FRIDAY’S EVENTS:
—President Donald Trump invoked the Defense Production Act to get needed medical supplies on the front lines of the coronavirus outbreak and the private sector mobilized against it.
—The number of American states with orders seeking to restrict movements of their residents to try to prevent further spread of the virus began to expand. New York and Illinois were poised to join California with orders to shelter in place.
— The federal income tax filing deadline was pushed from April 15 to July 15, though the administration advises Americans expecting refunds to file sooner.
— Gen. James McConville, chief of staff of the Army, said the military branch will move to “virtual” recruiting, wooing recruits more aggressively through a variety of social media sites and other online activities.
—Most Americans who rent their home, many of whom have lost their jobs in the sudden economic slowdown, will not be eligible for eviction protections despite what President Donald Trump said this week.
— U.S. stock indexes were mixed in early trading Friday, shedding some of their gains from a day earlier as Wall Street rounded out another turbulent week.
—In the Italian city of Bergamo, the coronavirus is depriving families of a bedside farewell with virus-stricken loved ones, or even a traditional funeral, and the cemetery is so overwhelmed by the number of dead that military trucks transported 65 bodies to a neighboring region for cremation this week.
—Members of President Donald Trump’s economic team convened Friday on Capitol Hill to start negotiations with Senate Republicans and Democrats racing to draft a $1 trillion-plus economic rescue package.
—Republican Senate Intelligence Committee Chairman Richard Burr sold as much as $1.7 million in stocks just before the market dropped in February amid fears about the virus epidemic.
—Newscasts bring word of “hot zones” and “lockdowns.” Conversations are littered with talk of “quarantines” and “isolation.” Leaders urge “social distancing.” In an instant, the pandemic has changed people’s vocabulary, just like everything else.
—What sheltering in place looks like from one AP journalist’s perch: Like many across the nation, we’ve already been hunkering down, working from home and home-schooling to help slow the spread of the coronavirus. Now it’s official, and even more eerily quiet.
___
WHAT YOU NEED TO KNOW:
For most people, the virus causes only mild or moderate symptoms, such as fever and cough. For some, especially older adults and people with existing health problems, it can cause more severe illness, including pneumonia. The vast majority of people recover.
Here are the symptoms of the virus compared with the common flu.
One of the best ways to prevent spread of the virus is washing your hands with soap and water. The U.S. Centers for Disease Control and Prevention recommends first washing with warm or cold water and then lathering soap for 20 seconds to get it on the backs of hands, between fingers and under finger nails before rinsing off.
You should wash your phone, too. Here’s how.
___
ONE NUMBER:
Nearly 624,000: That’s the number of passengers who passed throughout outbound checkpoints Thursday, according to the Transportation Security Administration. That’s the lowest number at U.S. airports of outbound passengers ever recorded by an agency created in November 2001 in the wake of the Sept. 11 terrorist attacks. It compares with 2.4 million on the same day a year earlier.
___
IN OTHER NEWS:
PANDEMIC POT: Companies in California and elsewhere are reporting big jumps in marijuana deliveries and sales, as consumers stock up ahead of lockdowns or simply light up in search of relief during anxious times.
___
The Associated Press receives support for health and science coverage from the Howard Hughes Medical Institute’s Department of Science Education. The AP is solely responsible for all content.
___
Follow AP coverage of the virus outbreak at https://apnews.com/VirusOutbreak and https://apnews.com/UnderstandingtheOutbreak