Column: Sports at a standstill; missing the rites of spring 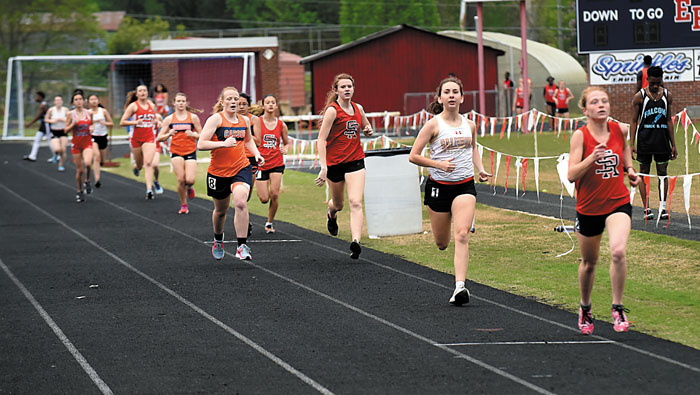 File photo by Wayne Hinshaw/for the Salisbury Post ... Scenes like this one from last April's Rowan County track and field championships are missing this spring, due to the nation's effort to stem the spread of the coronavirus.

Right off the bat, pun intended, let me qualify: I realize the world has far greater problems than the shutdown of athletics. However, this is the sports page and I miss what should be happening now:

• The bouncing of basketballs and squeaking of shoes on the hardwood, the cheers and overall madness during the NCAA Tournaments.

• The ping of aluminum bats, stroking baseballs and softballs, from Little League to the college level. And there’s nothing like the sound of wooden bats connecting as major leaguers get ready on the vivid green diamonds in Florida and Arizona.

• The yells of coaches and players, the whistles and the thud of kicks on soccer fields.

• The horn and the pounding of spikes on a track, with the fans’ cheering getting louder near the finish line.

• The animated sounds that can only come from spring football practices at Catawba and Livingstone.

Let there be hope. On a much, much smaller scale, some of us lived through the measles quarantine of late 1988 and early 1989. From December through most of February, winter sports stopped and large gatherings of any kind were halted by the Rowan County Health Department.

Again, that pales in comparison to what is going on today with the coronavirus. For practically everything to be affected in the entire nation is unbelievable. But the measles quarantine ended sooner rather than later and things got back to normal.

Here’s to hoping that the same thing happens this time.

So what are the county’s student athletes doing during the shutdown?

Angie Chrismon, the athletic director at South Rowan High School, reported that facilities are off-limits to school and non-school groups.

“We can’t do anything on campus,” Chrismon said. “I have absolutely no idea what the student athletes are doing, but I’m sure that they’re finding ways to run, throw, jump or whatever they need to do to stay in shape, in hopes that they will have some part of the season left.”

Last Thursday, the North Carolina High School Athletic Association put out a mandate that there would be no practices or games until at least April 6. Of course, Gov. Roy Cooper’s closing of all schools this week trumped that decision, anyway.

“We haven’t been told anything new from the NCHSAA,” Chrismon said. “Its offices are closed and they are working remotely as well. April 6 is the only date that we’ve been given, so we just hope to hear good news at some point.”

Chrismon added that no plans are being made for when schools are reopened.

“It would be a waste of energy until you know what to plan for and what you have left to plan for,” Chrismon said. “Danny Palmer, our Central Carolina Conference director, emailed us on Wednesday and we decided not to meet again until we had something more concrete. He’s been working on different scenarios, the what-ifs, but I’ve decided that I can’t change it, I can’t fix it and I can’t stress about it — until we know something more.”

Like most of the county ADs, Chrismon is also a teacher. She works with South Rowan’s at-risk students, and is the credit recovery coordinator at the school. Chrismon works with students who are at risk of not graduating, as they try to recover classes that they might have failed.

So Chrismon, like all teachers, has daily duties to help her students “continue the e-learning that the district is doing with the students at this time,” she said.

As far as the current sports shutdown goes, Chrismon has reflective “let’s make the best-of-it” thoughts.

“I think it’s a good opportunity for kids to take a little break, heal their bodies, be with their families and remember some of the fun parts of sports,” she said. “You know, just playing in their back yards and shooting hoops in the driveway. Sometimes, we can learn a lot from that.

“I’ve heard from parents and seen postings on social media that they didn’t realize how busy their schedules were until now,” Chrismon continued. “Some of them are toting kids from school to school for different practices all of the time, so everybody is hitting the reset button now.”

Chrismon can relate, as in addition to being South’s AD, she is the wife of the school’s baseball coach, Thad Chrismon, and mother of two student athletes. Nathan, a sophomore at South, plays on his father’s team and older brother, Austin, is a sophomore on the football team at UNC.

Now, everyone is home for a while.

“Yes, Austin is home from Carolina,” Angie said. “The ACC canceled all practices this spring. They’ve been informed to stay at home and get their workouts done. He’s home for the foreseeable future. I don’t mind having him home. I’ve seen him more now than since he left for college. But he’s a little antsy and glad that Carolina starts online classes on Monday.”