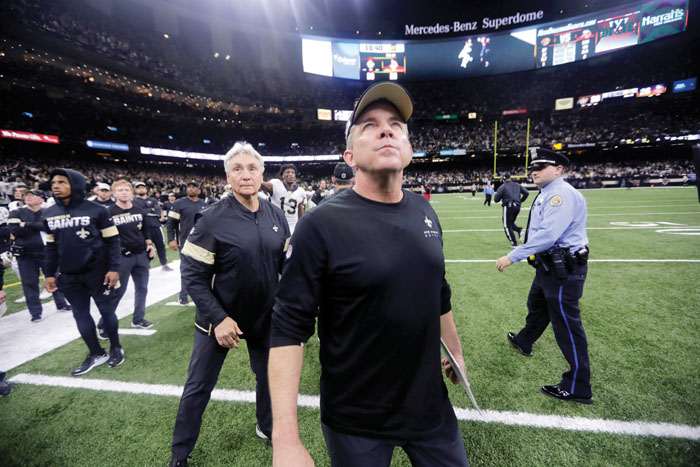 AP Photo/Brett Duke ... New Orleans Saints head coach Sean Payton looks up as he walks off the field after overtime of an NFL wild-card playoff loss to the Minnesota Vikings, last Jan. 5. Payton reported on Thursday that he has tested positive for coronavirus.

NEW ORLEANS (AP) — New Orleans Saints head coach Sean Payton says he has tested positive for the coronavirus, is resting comfortably at home and is making his test result public in hopes he can motivate people to do more to fight the pandemic.

Payton learned Thursday that he has tested positive for the coronavirus, he told ESPN before posting a photo of himself smiling as he sat on a couch next to his dog.

“Appreciate the well wishes,” Payton wrote on his Twitter page. “I’m feeling better and fortunate to not have any of the respiratory symptoms. 4 more days at home.”

Payton, 56, is the first employee of either an NFL team or the league to make such a diagnosis public.

Payton told ESPN that he was tested Monday for coronavirus after he began to feel ill a day earlier. He added that he has not been admitted to a hospital and does not have a fever or cough.

“I was fortunate to be in the minority, without the serious side effects that some have. I’m lucky,” Payton told ESPN. “Younger people feel like they can handle this, but they can be a carrier to someone who can’t handle it. So we all need to do our part. It’s important for every one of us to do our part.”

Payton said he felt it was important to be particularly vigilant in Louisiana and the New Orleans area because of international tourist traffic, especially around recently concluded Mardi Gras festivites.

“So our parents, and those that are more susceptible to this virus, deserve everyone doing their best to combat it,” Payton said. “There are hundreds of people right now in tough predicaments, fighting for their lives. Let’s be part of the solution, not the problem. We can easily help reduce the numbers of those impacted. We have to do our best to beat this.

“This is not just about social distancing,” Payton said. “It’s shutting down here for a week to two weeks. If people understand the curve, and understand the bump, we can easily work together as a country to reduce it.

“Take a minute to understand what the experts are saying. It’s not complicated to do what they’re asking of us. Just that type of small investment by every one of us will have a dramatic impact.”

Payton was tested soon after he returned from attending horse races Saturday at Oaklawn in Hot Springs, Arkansas, and the coach’s announcement had a ripple effect in horse racing.

On Saturday, Oaklawn remains scheduled to host the Louisiana Derby and several other graded stakes races — minus fans.

“I am self quarantining immediately and will get tested at the earliest possible time,” Amoss wrote on social media. “I feel great and have had no symptoms. Wishing Coach a fast recovery.”

NFL Commissioner Roger Goodell wished Payton well in a statement, and urged those in the NFL community and elsewhere to focus on public safety.

“Our primary concern is for Sean’s health and well-being,” Goodell said. “He did the right thing by seeking medical attention and we wish him a speedy recovery. It shouldn’t come as a surprise as this pandemic continues that members of our NFL family will be directly impacted.

“This news underscores the importance of everyone following the advice from medical and public health experts to protect themselves and others.”

Payton took his first head coaching job with the Saints in 2006. It was the club’s first season back in New Orleans after being displaced to San Antonio by Hurricane Katrina for the entire 2005 regular season. Payton has coached the Saints every season since — except 2012, when he was suspended for what the NFL said was his failure to stop an improper cash-for-hits bounty program run by former defensive coordinator Gregg Williams and some defensive players between the 2009 and 2011 seasons.

Eight of the 13 Saints squads Payton has coached have made the playoffs, advancing to the NFC title game in the 2006, 2009 and 2018 seasons, with the 2009 team winning the franchise’s lone Super Bowl title.

Payton designs the offense for the most part and calls plays for the unit led by record-setting quarterback Drew Brees, whom Payton recruited to New Orleans as a free agent in 2006.

With Payton at the helm, the Saints have have ranked first in the NFL in total offense yards six times, in the top four 10 times and never worse than ninth.