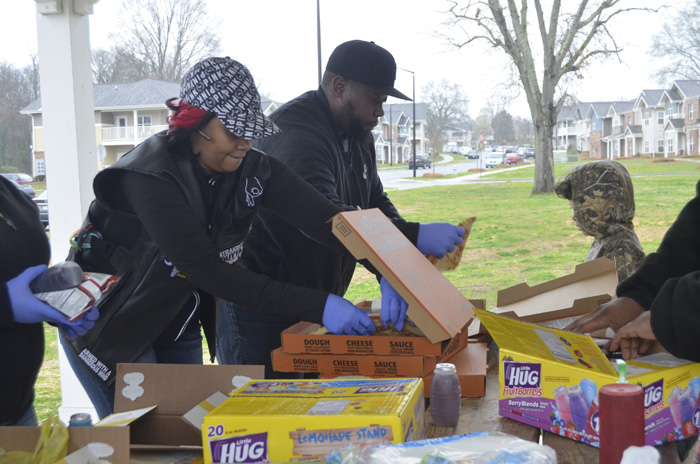 Shannon Hairston and Jermar Hoke give pizza to children at Brenner Crossing Apartment complex. Hoke is co-owner of Take Off Promotions, one a few businesses who got together to distribute food. The group will visit other complexes in and around Salisbury this week. SHAVONNE POTTS/SALISBURY POST

SALISBURY — Bev Ellis’ five grandchildren had pizza for lunch on Tuesday, and it was a meal that didn’t cost her a cent.

The meal came at a time when students all over Rowan County are missing meals that would’ve been provided at their respective school cafeterias. The Rowan-Salisbury School System has created a way for students to still receive breakfast and lunch via bus or pickup at schools, but some local business owners in the area decided to supplement meals from the school system with some pizza and snacks.

The group, which distributed over 600 slices of pizza, was made up of the owners and employees of two event promotions companies — Legit Paper Promotions and Take Off Promotions as well as Pure Platinum Motorcycle Club/Social Club and TwinBlitz, two twin hairstylists.

“It’s a great gesture because they didn’t have to do it,” Ellis said.

With limits recommended on contact with  large groups of other people and the schools closing because of the coronavirus disease COVID-19 pandemic, she has been afraid to venture out.

“There’s just a lot of people afraid to go out and some still, like me, are waiting on their checks,” Ellis said.

She’s on a fixed income and was thankful for a meal that she didn’t have to worry about providing for her five grandchildren.

“It’s a great blessing because some parents don’t have it,” said Maria Daniels whose children were able to eat lunch as well.

The idea was initiated by Jermar Hoke, co-owner of Take Off Promotions, and friend Darrell Phillips, owner of Legit Paper Promotions. The two thought about students who would be home from school.

Hoke said the pair sent messages to friends and fellow business owners and posted messages on their social media accounts asking for donations and volunteers. They’ve been able to provide pizza, chips, drinks and other snacks for children in and around Salisbury.

“We said let’s do this for the community,” Hoke said.

They received several donations from people who wanted to either volunteer or provide a meal, including East Spencer business Ant’s Stop and Shop, which donated enough money for about 30 pizzas.

Jerry Randall, who has three children that ate pizza for lunch, said he loved what the business owners and volunteers were doing. If he had money to give, he also would’ve helped, Randall said.

“It’s awesome and in my mind, that’s a blessing from God,” he said.

The group already provided a lunch meal for children at Brookview Apartment complex on Monday and served about 80 children.

The following are other locations where the group says it will provide pizza and snacks this week:

The group will continue to travel to other city apartment complexes to feed children between the hours of noon and 2 p.m.

Commissioners vote to use West End Plaza as relief…