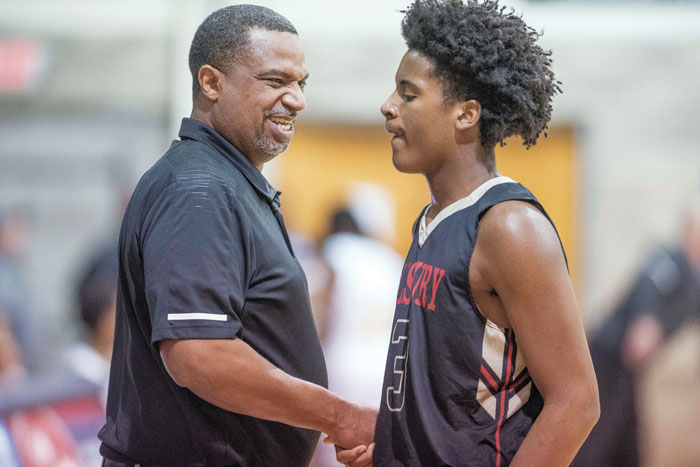 SALISBURY — Salisbury’s boys basketball team won by 20 against West Rowan and by 19 against North Rowan.

The Hornets won a playoff road game by 30 points.

They were the county’s best boys team, whether you want to measure that by final MaxPreps ranking, by the eye test, or by common sense. They played everyone except Carson and they went 5-0 in county games.

“We never played bad,” is how Salisbury head coach Bryan Withers summed it up.

Withers is the Post’s co-Coach of the Year, sharing the honor with North Rowan’s Jason Causby.

Causby’s team looked pretty dreadful in December, but kept getting better and arguably was one of the stronger teams in 1A by the end of the season. North was the last Rowan boys team standing in the playoffs, reaching the third round.

As far as Salisbury, the Hornets were oh-so-close to having an incredible season for Withers, who also shared county co-coach of the year honors (with Carson’s Brian Perry) when he led the Hornets to a regional final appearance in 2018.

The Hornets finished 17-10, which doesn’t sound all that amazing, but nine of those 10 losses could just as easily have gone in the win column with a kind bounce or a good roll or a favorable whistle. The Hornets were good. There were eight times when they responded to a heartbreaking loss with a victory.

“We played at a different level against the better teams we played,” Withers said. “We were always right there. This was just a season when we couldn’t quite get over the hump.”

A Rowan County Player of the Year in his playing days at Salisbury in the late 1980s, Withers was head coach at South Rowan before he came back home to Salisbury. He was head coach at South for three years, in the latter stages of the Raiders’ days in 3A. Withers managed 27 wins in those three seasons, with 14 coming in conference games in the North Piedmont or South Piedmont. In retrospect, that was some fine coaching.

At Salisbury, where the talent pool is deeper year-in and year-out than it is at South, it’s become clearer how good a coach Withers is. He’s 94-36 in five seasons at SHS. That’s winning 72.3 percent of the time.

This season’s 10 losses were actually the most Withers has experienced in a season with the Hornets. There was a reason for that. Six of the Hornets’ setbacks came during the 18-game league schedule. Another was in the CCC tournament.

“This was the best I’ve seen our league (Central Carolina Conference), from top to bottom,” Withers said. “There were a lot of senior-heavy teams, a lot of teams with great athletes, a lot of well-coached teams. It was a very competitive league, and you had to play every night. Even some of the teams toward the bottom of the league were really improved.”

Salisbury lost to CCC co-champ North Davidson 67-65 and 70-68. Salisbury handed the other co-champ, Lexington, one of its two CCC losses. Thomasville, Ledford and Central Davidson split their regular-season CCC matchups with the Hornets. All three had excellent teams that won 15 or more games.

Withers was the defensive backs coach for Salisbury’s football team which made it to the state championship game. The season got under way without the football players, including a couple of key ones — Jalon Walker and Jabril Norman.

“We played some early games with a roster of seven or eight, but guys grew into playing a lot of minutes, Withers said. “After we added the football guys, we looked really good, at times, but we never quite blended. They were all good guys, we just never quite put it all together.”

The one thing the Hornets lacked was a point guard like they had when Trell Baker got everyone involved and steered the team to 27 wins two years earlier.

But they did have scorers, especially Zay Kesler, who averaged 16.3 points. They had decent size. They had special athletes.

“Latavian White, Nate Brown, Joe Witherspoon, Cam Stout — those guys really came on and had excellent years for us,” Withers said. “(Sophomore) Jalon Walker made all-conference as a rebounder, defender and shot-blocker, and I hope everyone sees that. You don’t have to be the leading scorer to contribute a lot to your team.”

It all added up to a team that flirted with greatness.

The Hornets were an eyelash from winning the Dale’s Sporting Goods Sam Moir Christmas Classic, but A.L. Brown, a 3A team that finished 18-9, rallied to get the game to overtime and nipped the Hornets in OT in the championship game.

In mid-January, in the Big Shots MLK Invitational in Greensboro, Salisbury held a double-digit lead heading to the fourth quarter against Reidsville, but lost 92-90 in what may have been the game of the year. Kesler and Brown combined for 47 points. Reidsville had one of the state’s best athletes in Breon Pass. He scored 50. Reidsville would finish 26-3.

“We had some tough, close losses that made a difference in the playoff seedings,” Withers said.

Salisbury was the No. 17 seed when the 2A West bracket was announced, but no one really wanted to play the Hornets. After Salisbury smashed Smoky Mountain in the first round, Forest Hills, the No. 1 seed and undefeated at that point, hosted Salisbury in the second round.

It was a game the Hornets led by by two points late — with the ball — but a steal and a three-point play put the game in the win column for Forest Hills and ended Salisbury’s season.

“We had them up against the ropes, but we made a mistake and came up short,” Withers said. “That would have been a big one.”

Said Forest Hills coach Matt Sides, “We hated the draw we got because we knew we knew Salisbury was good enough to make a run through the regional to the state. Ton of respect for Salisbury. They’re tough as nails. It was two heavyweights trading punches, and we were fortunate to advance.”

In all, Salisbury played 18 of its 27 outings against teams that won at least 15 games.

But the Hornets never played bad, and a lot of times they were really good.

“We’ve got a good group of guys at Salisbury right now, a lot of athletes,” Withers said. “We’ve got a lot coming back next season (a roster headed by Brown, Walker, Stout and Witherspoon). Maybe next year we’ll find that blend and get over the hump.”