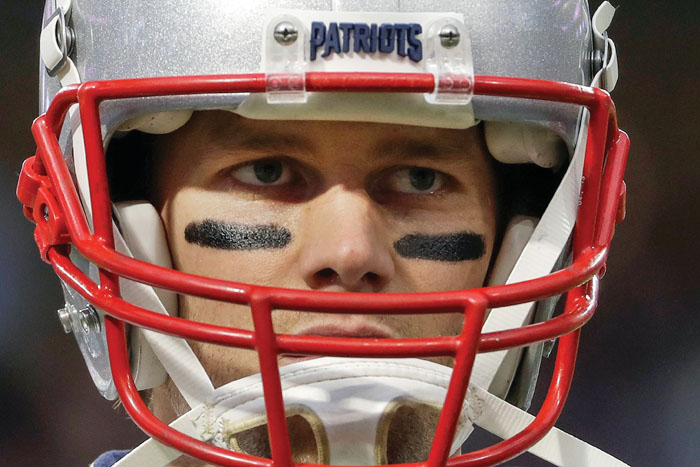 FILE - In this Feb. 4, 2018, file photo, New England Patriots quarterback Tom Brady warms up before the NFL Super Bowl 52 football game against the Philadelphia Eagles in Minneapolis. Brady, the centerpiece of the New England Patriots’ championship dynasty over the past two decades, appears poised to leave the only football home he has ever had. The 42-year-old six-time Super Bowl winner posted Tuesday, March 17, 2020, on social media “my football journey will take place elsewhere.” The comments were the first to indicate the most-decorated player in NFL history would leave New England. (AP Photo/Matt Slocum, File)

By FRED GOODALL AP Sports Writer
TAMPA, Fla. (AP) — The Tampa Bay Buccaneers enter free agency with expectations of signing Tom Brady and bolstering a defense that will be one of the keys to helping the six-time Super Bowl champion quarterback be successful with his new team.
There’s been no official announcement on Brady joining the Bucs after 20 seasons with the New England Patriots. However, there’s already an increased demand for tickets.
Tampa Bay ranked 30th among 32 teams in home attendance, averaging 51,898 per game last season.
Within hours of reports of the team closing in on a deal with Brady, the website selling season passes for 2020 showed more than 2,400 people in a queue waiting for an opportunity to make purchases.
Brady ended his historic run in New England, announcing on social media Tuesday that he would become a free agent for the first time in his career.
Armed with plenty of salary cap space, a roster featuring a pair of 1,000-yard receivers and a coach with a proven track record of working with high-profile quarterbacks, the Bucs took a shot at making themselves relevant for the first time in more than a decade.
The Bucs went 7-9 last season and missed the playoffs for the 12th straight year, the second-longest drought in the league behind the Cleveland Browns. They haven’t won a postseason game since their 2002 Super Bowl championship run.
Landing Brady not only figures to fill empty seats at Raymond James Stadium and make the Bucs a playoff contender right away, but also raises the prospect of Tampa Bay becoming the first team to win a Super Bowl in the host city’s stadium.
Next season’s NFL title game is in Tampa.
Brady won 17 division titles and appeared in nine Super Bowls — winning six — with the Patriots. He’s a four-time Super Bowl MVP, 14-time Pro Bowl selection and three-time regular season MVP who has made 41 postseason starts.
The Bucs have played 15 playoff games in their 44-season history, none since 2007.
In signing Brady, Tampa Bay also officially moved on from Jameis Winston, who became a free agent Wednesday after five seasons as the team’s quarterback.
The No. 1 overall pick from the 2015 draft departs as the club’s career passing leader, but compiled a 28-42 record as a starter and never shook off a penchant for game-changing mistakes that undermined his chances to be successful.
The 26-year-old led the NFL in passing yards in 2019, while also playing his way out of plans for the future by becoming the first player in league history to throw at least 30 touchdown passes and 30 interceptions in the same season.
Brady arguably had his worst non-injury season last year, throwing for 4,057 yards with 24 TDs and eight interceptions.
Still, the Patriots won 12 games and extended their string of consecutive playoff appearances to 11.
Coach Bruce Arians spearheaded Tampa Bay’s bid to sell Brady on signing with the Bucs. He’s also worked with Peyton Manning, Ben Roethlisberger, Andrew Luck and Carson Palmer.
While insisting he still believed the Bucs could win with Winston at quarterback, Arians reiterated last month that he wanted to know what might be available behind what he referred to as “Door No. 2” in free agency.
Turns out, it was Brady.
___
More AP NFL: https://apnews.com/NFL and https://twitter.com/AP_NFL