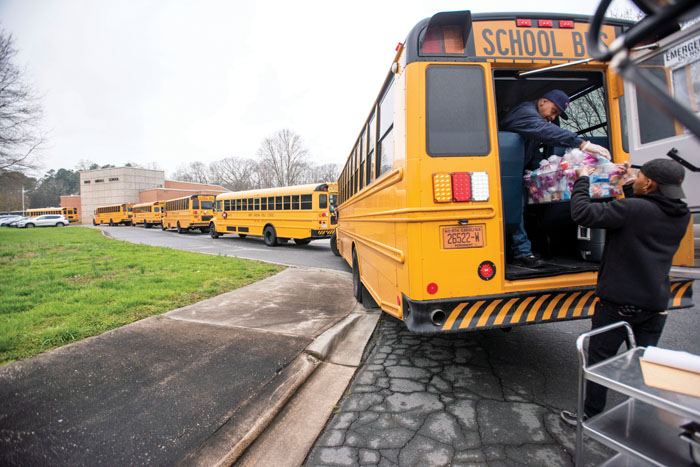 SALISBURY – Knox Middle School Principal Michael Courtwright gave a similar briefing to the school’s nutrition and driving staff that was given in all the other county schools on Tuesday morning.

He told them to follow state and federal guidelines, stay six feet apart from each other as much as possible, wear gloves and to just hand off prepared meals when they meet people at stops.

“Make sure you are giving out supplies with gloves on,” Courtwright said. “No parents, no students should be getting on that bus.”

The crew of workers carted out food and supplies to buses and loaded them up. Along they way, they had to overcome steps without tipping over completely-loaded carts.

Tuesday was the first day Rowan-Salisbury Schools delivered meals directly to students and families to reach kids who depend on schools for meals during a statewide closure to slow the spread of COVID-19, a coronavirus disease.

The district does not feed every student every school day when schools are open, but in short order Rowan-Salisbury Schools has prepared for the foreseeable future to make enough food to feed every student lunch and breakfast each weekday  — roughly 18,000 lunches and 18,000 breakfasts a day. To claim meals for themselves, and even siblings who are too young to attend school, students have to show up to nearby bus stops or claim them in car rider lines at schools. Parents can also claim meals. They are all free.

The district gave out 7,500 lunches and 7,500 breakfasts on Tuesday, which was lower than Altmann hoped, though she expects that number to increase as the word gets out. Bus delivery was much more popular than pickups.

Altmann said she has the best staff in the country and she does not expect the program to be perfect at first, but it is important.

“Some of these kids, this is all they get, is us,” Altmann said, “I did not realize that until I came to work here.”

Everything on a streamlined menu was individually wrapped, including potato salad, barbecue and salad. The popular Salisbury Dippers, which are cheese sticks with marinara dipping sauce, were not on the menu on Tuesday. Breakfasts provided to students are all cold items — milk, cereal, juice and bananas, for example — that can be stored in a refrigerator and easily eaten the next morning.

Donnie Williams, who has worked in school nutrition at RSS for 25 years, said he, like most people in the district, did not expect to be distributing meals to students via school bus one week ago. Despite the surprise, Williams said putting together the ongoing feeding program has been fun. Williams said he is always glad to feed a child. His son attends Knox.

“There’s always enjoyment, if you love your job, like we do,” Williams said. “We love our jobs or we wouldn’t be in this thing.”

Knox Athletic Director Darrin Turner volunteered to drive a bus, saying he is a service-minded person and wanted to help even though he did not have to be there. Turner said there are a few kinks to work out in the program. After Tuesday, though, the district will regroup and look at changes that could include having buses onsite instead of at the district garage.

“I’m thankful that we have the opportunity and the government is allowing us to help feed the kids, because at the end of the day that’s all that matters, the kids,” Turner said.