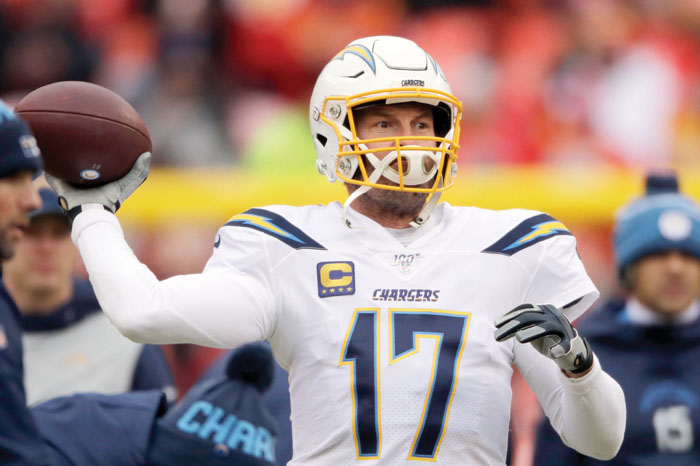 The longtime Chargers star agreed to a one-year contract with Indy on Tuesday, according to a person who spoke to the Associated Press on condition of anonymity because the deal cannot be officially announced until Wednesday.

“Any time we have a chance to acquire a player that makes us better at any position, we’re going to do it,” Ballard said at his end of the season news conference in January. “So I wouldn’t just focus on the quarterback position.”

It’s hard not to when making this kind of investment in a 38-year-old, 16-year veteran who produced his fewest touchdown passes, 23, since 2007 and his most interceptions, 20, since 2016. It was one reason the Chargers decided not to bring back the franchise’s career passing leader.

The New York Giants selected Rivers with the fourth overall draft pick in the 2004 draft then made a draft-day swap with the Chargers for Eli Manning, whose older brother, Peyton, was still starring in Indy. Twice during Rivers tenure, he played on teams that eliminated the Colts from the playoffs.

And it will almost certainly rekindle memories for Colts owner Jim Irsay, who was a teenager when his father’s team dealt then-39-year-old quarterback John Unitas from Baltimore to San Diego in 1973. That turned out to be the final season for Unitas, a Hall of Famer who died in 2002.

The Colts believe Rivers can last at least that long.

Rather than using the No. 13 pick in April’s draft to bring in a new young gun, they dealt it to the 49ers for Buckner and then continued negotiating with Rivers’ agents.

Brissett started 15 of 16 games last season after replacing the retired Andrew Luck in August. The Colts went 7-9 and missed the playoffs for the fourth time in five years.

But from the moment of Luck’s sudden departure through last month’s NFL annual scouting combine, Ballard continued insisting the Colts were all-in with Brissett.

“From my understanding, nothing’s really done (with Rivers) till the league year starts tomorrow,” longtime left tackle Anthony Castonzo told reporters on a conference call, two days after re-signing with the Colts. “But regardless of who’s playing quarterback out there, as the left tackle it doesn’t change your job at all. I would imagine Chris and Frank have a fantastic plan.”

It now appears Brissett will be the odd man out in Indy and could even be on the move. He was acquired in a deal with New England just before the 2017 season.

Rivers ranks sixth in league history in completions, yards passing and TD passes and seventh in attempts and is 123-101 as an NFL starter. He hasn’t missed a start since 2005.