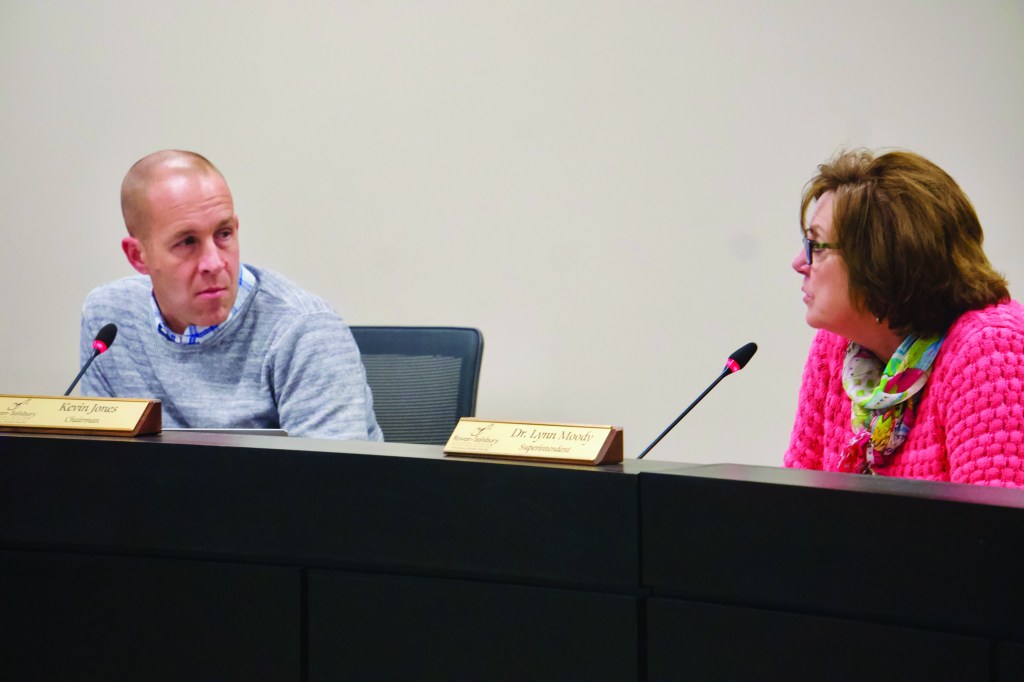 Carl Blankenship/Salisbury Post – Board Chair Kevin Jones and Superintendent Lynn Moody at the meeting. The board recieved updates about how the district is handling the closures.

SALISBURY – As the district was preparing students for learning during a state-mandated closure, the Rowan-Salisbury School Board met Monday afternoon to talk details of coronavirus plans.

There were no actions taken at the meeting but critical district personnel were on hand to update the board about measures being taken during the closure and answer questions. Everyone in the room was deliberately spaced out in accordance with public health recommendations to reduce close contact.

Superintendent Lynn Moody described the process that took place during the weekend. District leadership workshopped plans for hours until coming to final decisions.

“We are in a different place than every other school district that I know of,” Moody said.

Students in grades 3-12 each have a device, either a tablet or a laptop, to take home with them as the district moves toward online learning for at least the next two weeks. The district also has distributed iPads to K-2 students, who normally only use them in classrooms. Those iPads normally charge in docking stations in classrooms, but Apple sent chargers free-of-charge to fill that gap for students.

Moody said K-2 students whose parents were not with them to pick up iPads either at schools or when materials were delivered via buses would not be able to receive them for two weeks. Though, if the closure goes on longer, the district will create a plan to get tablets to students who did not receive them.

There also are now public Wi-Fi networks outside of schools that can be accessed by students who need to turn in assignments.

Meals will be delivered to students who need them via buses on normal routes or can be picked up meals in car rider lines at schools.

Every district employee working will be paid, and the district has the ability to pay them until the end of the year, unless they take leave per normal procedure.

Board members Susan Cox, Josh Wagner and Travis Allen each had questions directed at ensuring employees will be paid.

Moody said the district is paying attention to staff that is medically fragile and more than 65 years old, noting a lot of bus drivers are past that age and retired. Moody said administrators will work with someone who does not want to drive into the community; those folks will be given other tasks.