Some churches choose to stream services online; others proceed with caution 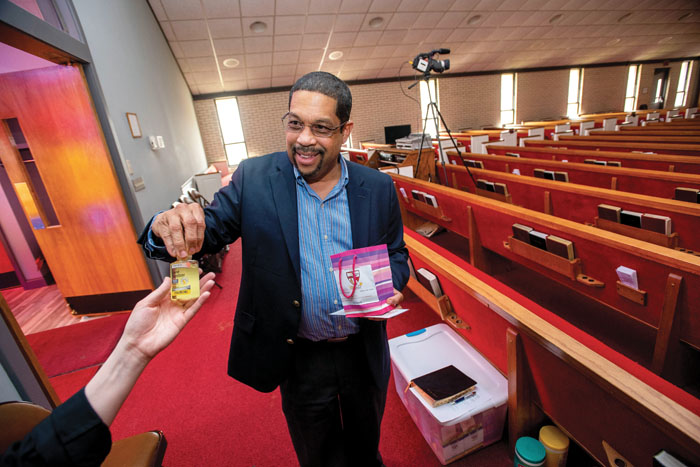 JON C. LAKEY/SALISBURY POST Rev. Dr. Roy Dennis said his church has always offered visitors to services a gift bag which includes a small bottle of hand sanitizer. Dennis from Gethsemane Missionary Baptist church on Caldwell Street in Salisbury, plans to hold Sunday Morning services with precautions being taking to reduce possible spreading of contagious illnesses in the wake of the global breakout of the COVID19 (Coronavirus). . Salisbury, NC , 3/13/20

SALISBURY — It’s going to take the entire community to come together to get through the threat of COVID-19, said Father Robert Black of St. Luke’s Episcopal Church.

Black is one of several local church leaders making changes to regular services and events as a precaution against the widening coronavirus pandemic, which had resulted in 23 cases in the state on Saturday. Some churches have decided to stream services online.

Black, like other community leaders, is following an order made by Gov. Roy Cooper to eliminate events with crowds of 100 people or more if possible.

Black said he was on a conference call Thursday with priests and bishops across the state. The governor initially advised against events of 100 or more. And following the governor’s suggestion, there “was no decision to make,” Black said. It was made for them. But for those who hadn’t decided, Cooper issued his order on Saturday.

St. Luke’s Episcopal, located at 131 W. Council St., made plans to stream services online for church members to watch from home. Black said a few people will be with him as the services are conducted, but he will be the only one participating in Sunday eucharist, or communion.

Black said leaders are looking at additional options for Bible study sessions and the Lenten program, such as using YouTube, Zoom conference services or Facebook Live.

First Baptist Church, which usually has between 360-425 members between two Sunday services, will also stream its services on Facebook Live using only the essential people needed to have a full service, according to interim senior pastor Jon DeBell. Those people include the worship team, the ministry staff and the tech personnel. The church, located at 223 N. Fulton St., is encouraging members not to come, and church leaders will make a decision for plans to move forward for future services.

DeBell, like other church leaders, believe that community is a big part of any church’s existence, and this time is “going to put a strain on how we experience community and how we practice community,” he said.

However, he said this time is “also an opportunity for church and Christians to display their true hearts and step up to the needs in the community,” as the church should strive to be an example for others.

Gethsemane Missionary Baptist Church, located at 719 South Caldwell St., said Friday that it planned to continue services, but Rev. Roy Dennis was encouraging members who feel ill or are taking care of an ill loved one to stay home. The church will conduct shorter services and broadcast the services live on Facebook.

The entrance of the church already has hand sanitizing dispensers to use, but the availability of hand sanitizer will be increased for members. Greeters at the door will be equipped with gloves. Pews and hymnals will be wiped down more frequently. Additionally, Dennis is calling for church members to greet each other with elbow bumps rather than handshakes and hugs.

“I’m a pastor who loves hugging people. It’s my nature,” he said. “But we’re not going to do it because if I do, someone else will.”

The church uses a one-call system to alert the congregation of about 200 people with important announcements, he said. As of Friday, he said, church services were still on, but he recognized that because it’s “a fluid situation.” Changes may still come as he and church leaders monitor updates.

And as an extra measure, he and church leaders are restricting visits to hospitals or homes unless people are experiencing a life-threatening or life-ending conditions.

A sign of fast-changing plans for organizations across the state, Sacred Heart Catholic Church, located at 375 Lumen Christi Lane, planned Friday to continue its services as usual, according to director of operations Michael Becker. If the Roman Catholic Diocese of Charlotte, Becker said Friday, were to advise against holding mass, it would be optional for people to attend.

All churches will remain open as much as possible so that the faithful may come in and pray, Jugis said.

Some churches, however, were still unsure on Friday how to proceed with services in the coming weeks.

Apostle Bradley Taylor, the senior pastor at The Reach Church, located at 722 W. Horah St., said services will be broadcast live on Facebook for members. Only core leaders and staff with the video and music teams, which amounts to about 30-40 people, will attend the service in-person.

“The biggest thing for us is that we’re people of faith, and community is really important,” Taylor said. “I don’t want to ban (community) altogether, but we also have to comply with safety concerns.”

Moving forward, he said, church leaders may decide to add additional services to keep the attendance below 100 people. The usual crowd is between 200-250 people, he said.

He added that the church is being mindful of shaking hands and hugging and it will take precaution with hand sanitizing stations.

Black encouraged the rest of the community to come together during this time.

“Take care of each other, especially the elderly, who may be afraid to go to the grocery store,” he said.

Looking at silver linings, Dennis said, “my prayer is that families will come together” out of this.

And though he knows folks are nervous, Taylor said, “The message I give is for people of faith is that we walk by faith and not by fear. My hope is that it doesn’t grip folks to the point that they abandon praying and worshiping and coming together. That’s what we do.”

Editor’s note: This story was updated at 11 a.m. March 15  to reflect new guidance from the Roman Catholic Diocese of Charlotte.

Local historical landmarks applications may be paused to alter…