Guest column: How ‘Family Over Everything’ is possible in Rowan County 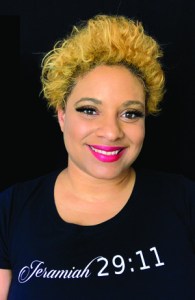 You’re a new resident to Salisbury and you hear that a basketball game is coming up. You make plans to take your kid to see the game, and you’re excited to possibly do something that you would normally do in any city.

You sit down with your popcorn in hand and your kid probably has some skittles or candy of some sort. The game is intense, and the atmosphere is great. There’s a lot of cheering and some yelling at the refs or the coaches. Hey, It’s a competition!

Then you look around and you realize that a lot of the people in the stands are sitting with grandparents, aunts, uncles and even siblings. It was when I started attending functions that had to do with children that I realized there is a deep love for family in the African-American communities of Salisbury.

Growing up between two cities, being the Bronx, New York, and Charlotte, I saw a lot of broken families and absent fathers. Coming from a single-parent-home myself, it was a promise that I made to myself that I would not raise my kids in a home that is not a two-parent home. I am so grateful to be living the dream I wanted for myself.

This story isn’t about me though. I started thinking about February being Black History Month and one of the things that stood out for me in Rowan County is the value placed on families in the African-American community. It is evident during sports seasons and holidays. It is evident in the churches in the area and during parades that we have — where you see families of multiple generations who sit together.

If you are on social media at all, you will find many saying, “family over everything.” The love for family is strong in Rowan County. The most common question I get asked is “who is your family?”

During the holidays, you will see driveways and streets lined with cars as several families gather. That love is evident in the size of homes here in Rowan County. There aren’t many two-bedroom houses and most are three bedrooms or larger, which again points to the value of families.

To be sure I am not just basing this off my opinion. I decided to ask a few people what they thought about African-American families in the county. I asked two questions:
• Am I right in my observations that many of the black men of Salisbury do take care of their children and are active in their kids lives, even if they are not in a relationship with the mother?
• Do you believe that Salisbury overall has great family values?

I first asked my sister-in-law, Ebony Harris. She is married to my brother-in-law, Robert Harris,. Together, they have five children.

I’ve watched my brother-in-law be there for all his kids, and they work together for their family. So, I knew what her answer would be, but I wanted to be sure.

She said, “I do think that the men in this town are fathers to their children and play active roles in their kids’ lives, whether they are with mothers or not. I am not certain I can answer the second question other than thinking about my own family, but if I had to say one way or the other, I’d say there is a sense of great family values in the black community. I see FOE (family over everything) a lot on Facebook. I think the black community tries to instill some sort of value in their families.”

To ensure I was able to shed the correct light on black families and the men who are active in their children’s’ lives, I decided to ask Sierra Watkins, a native to Salisbury and the owner of Siebration Bar, which is currently being developed. I provided the same questions to her and her response was: “I wouldn’t say the majority of the men take care of their family, but a lot of the men around here do take care of their children.”

Watkins continued to explain that “the family values around here are pretty dope.” She is a single parent but has a very strong village around her, from her family to people who are not blood related to her. That leads me to say even single parents here have the ability to be connected and grounded.

According to Kidscount.org, as of June 12, 2018, single parents are raising more than a third of America’s kids and 66% are African American families. According to the same site, kids are less likely to experience poverty if they are in a two-parent home.

Since you cannot fix the structure of family, it is imperative for the organizations that step up to provide stability to the families and to the school system in Rowan County, which has some exceptional programs that go above and beyond to ensure that the kids of the county, no matter their family structure, know they are loved and appreciated.

There are men in our community that have stepped up and have made sure, no matter if the child’s father is active or not, they are visible and accessible.

“Man Up Monday” was started by Pastor Timothy Bates and George Bates. Its mission is to get men of the community actively involved in the schools, the community and the overall lives of the youth. The goal is to bridge the gap between the community, schools, children, their families and community leaders by being a physical presence in the schools and surrounding neighborhoods. The men with the organization volunteer, mentor and advocate for our youth to move in a positive direction, either through group activities or one-on-one instruction. They are like fathers, brothers and uncles to many young men that may not otherwise have them. They are positive role models and they live what they speak.

Chariel Dye heads up “Team Up Tuesday” in honor of the late Latasha Wilks. I asked her if she felt like men in our community play an active role in our community and her was reply was “yes.” She was a preschool teacher at a few of the childcare centers in Salisbury and, oftentimes, the fathers were picking up the children and coming in for classroom events. She went on to say that many of the fathers may not have had their fathers in their lives and were making efforts to not have their children face the same experiences. She believes that family values could be better, but sited social media for the gap there.

These organization visit schools, gather supplies, and work tirelessly week after week to ensure the success of as many kids as they can.

There are others that are not mentioned here, but that is not to say they are not active. Family values in the African-American community in Rowan County are alive and well. I am thankful for such a strong and connected community. To view more information about these organizations, visit the links below:

Sabrina Harris is a Salisbury resident, mother to five children and a successful small business owner at Sabrina Bougie Styles.