A century of Women’s Suffrage celebrated

A Century of Women’s Suffrage Celebrated 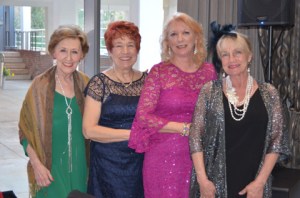 The American Association of University Women (AAUW) held a Gala March 7, during Women’s History Month, to celebrate a Century of Women’s Suffrage. The Voting Rights Gala, “It’s about Time”, benefitted AAUW scholarships for Rowan County students to attend the National Conference for College Women Student Leaders in May.

Local artists provided an evening of music in the Crystal Peeler Lounge at Catawba College. Acclaimed classical concert vocalist, Teresa Moore-Mitchell, opened with the “Lord’s Prayer” and “He’s Got the Whole World in His Hands”. Destiny Stone, a rising young neo-soul artist and Catawba graduate, offered two of her original numbers.

Following a buffet dinner catered by Buttercup Café and Catering, the “Ladies of Lee Street” (Becky Lippard, Mary Ann McCubbins, Carol Harris and Patsy Parnell, with accompanist Susan Trivette) got toes tapping and hands clapping with a series of songs from the Suffragist Movement, “9-5”, “Leader of the Pac” and ending with “I Am Woman”.

City Council member Tamara Sheffield shared a brief history of women’s struggle to get the vote in 1920 with the enactment of the 19th Amendment to the U.S. Constitution. She cited Susan B. Anthony and ex-slave Sojourner Truth, both of whom attempted to register and vote in 1872. Ida B. Wells, Alice Paul, Lucy Stone and Carrie Catt and thousands of other women fought for decades to secure the vote.

“In the late 1800’s there were lots of court cases, 500 arrests, 170 prison sentences, harassment, violence, marches and picketing,” recalled Sheffield, as women fought for their full citizenship rights. She also made the pointed out that it was not until August of 1965, with the passing of the Voting Rights Act, for American-Americans to fully gain the right to vote across the states. “And STILL we are in the fight for voter access, fair voting districts…and still no woman has broken the final glass ceiling in the U.S. and it will be another 4 years before it can be considered,” referring to the Presidential election.

The celebration of women continued with the recognition of four outstanding women who gave leadership to the Salisbury Branch of AAUW over the years. Dr. Elaine Stiller and Bonnie Hodges were honored for their many years of service to the organization, along with Ann Medlin, who has moved away and did not attend. The evening’s program was dedicated to the memory of Edith Alcorn, who served the organization is many capacities over four decades before her death in 2014. Her son, Greg Alcorn, was a Title Sponsor of the Gala.

The other Title Sponsor for the evening was Behavioral Concepts, founded by current AAUW Branch President, Dr. Nicole Sherrill-Corry, who closed out the program inviting participants to dance to music provided by DJ Naquan Jones. Gala attendees, ages 5 to 85, rose to the occasion and celebrated with the “Electric Slide” and other dance favorites.

AAUW, one of the nation’s leading voices promoting education and equity for women and girls since its founding in 1881. The Salisbury AAUW Branch has been active locally for 69 years.