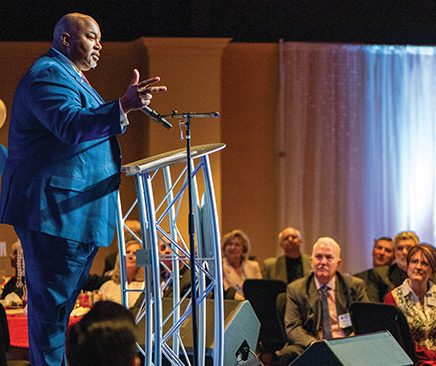 The dinner is an annual fundraiser and kick-off for the Rowan County Republican Party’s election season. Robinson, who won the March 3 primary, came into the spotlight in 2018 when he spoke at a Greensboro City Council meeting about gun rights and the video went viral. He also was a speaker Friday night at the Lincoln-Reagan Dinner.

At one time, Robinson said, the Republican and Democratic parties only disagreed about how taxes should be spent, but there was always a common denominator.

He said “our side” respects and loves life and “believes we should purge abortion from our shores for the cause of life,” while the other side believes “unborn human beings and sometimes born human beings are expendable.”

Republicans want students to be taught real-life skills in school and that discipline and order are their principles, while Democrats think homosexuality and transsexuality should be taught in the classroom, Robinson told dinner attendees. He said those are “adult issues” that should not be discussed “in public schools on the taxpayer dime.”

Robinson said the majority of law enforcement officers are good, but Democrats push a false narrative that they are racist and that it’s police brutality if officers put their hands on a criminal.

He said the Democratic Party creates victims and the “Republican Party has and always will create victors.” The party must send out that message.

“It is time for us to start controlling our own narrative and telling people that this is the party of freedom, equality and victory, and it always has been from its very beginnings,” Robinson said. “It will continue to be in the future with great folks like you.”

“Democrats believe in leading from behind. We have a president that puts America first. The Democrats are the party of the Russian hoax, the Ukraine hoax, impeachment and four years of presidential harassment. We are the party of four more years.”

Forest, who was slated to be the keynote speaker but was not in attendance, was displayed in a video message, saying “Let’s all start working really hard, and we’re going to be successful in November.”