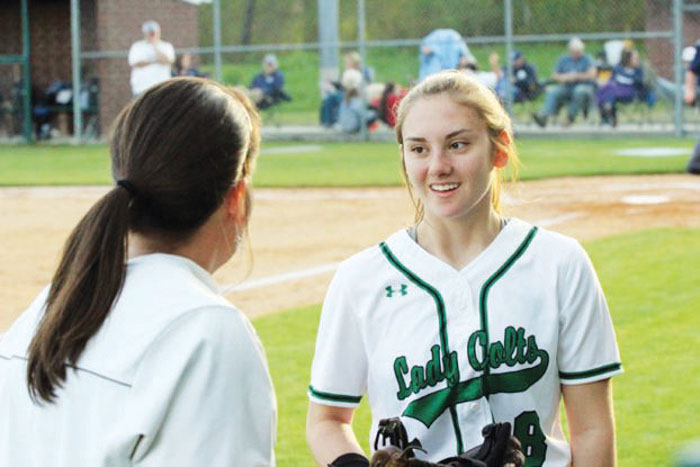 MOUNT ULLA—  A defending state champion took on a team with championship aspirations.

Throw in the fact that it might be the last softball game the girls will get to participate in this season, and there was something special happening on Friday night in front of a packed house at West Rowan.

West Stanly pitched a no-hitter and walloped two homers in a 3-0 vicory over the Falcons.

Rachel Efird had three of the Colts’ six hits.

“This wasn’t your normal, laid-back, early-season game,” West Stanly slugger Kailey Furr said. “Knowing this could be the last one, that raised the intensity and made it nerve-wracking.”

West Stanly (3-0) has put together quite a softball program from rural towns such as Locust, Oakboro, Red Cross, Stanfield, Endy and Frog Pond. The Colts won the 2A state championship in 2019 and finished that season as the No. 1 team in North Carolina (for all classifications). They were ranked 35th nationally.

West Stanly has powerful sluggers, slick fielders and quick baserunners (the Colts went first-to-third on a bunt), but softball teams are only as good as the girl in the circle. West Stanly also has a lights-out hurler. Left-hander Jordan Hatch, a junior committed to East Carolina, was the Gatorade North Carolina Player of the Year as a sophomore.

“We scheduled them because we knew how good they were,” West Rowan coach Jimmy Greene said. “We’ve got to find some hits to take some of the pressure off our pitcher, but we fought and we made some good plays. It was a good experience for our girls.”

It was an entertaining fight, but Hatch won her high-level pitching duel with West Rowan senior Whitley Arnott, who signed with Catawba.

Hatch tossed a no-hitter and struck out 10, with one walk and one HBP.  Arnott fanned 12 and walked two.

Hatch needed 84 pitches and threw 60 for strikes. Arnott had fierce scraps with numerous hitters and had to sling 127 pitches, including 85 strikes. West Stanly fouled off pitches and stayed alive on tough offerings that Arnott normally gets strikeouts on.

“Hatch doesn’t throw it any harder than Whitley, but she can really spin it,”  Greene said. “It’s coming in there left-handed, and she hits every spot.”

At 5-foot-5, Hatch doesn’t look like she’d be overwhelming, but she is.

“She’s savvy — just knows how to pitch,” West Stanly coach Craig Carter explained. “She’s been there and she’s done it, and she and her catcher work well together. I trust ’em.”

Hatch said she wasn’t familiar with the Falcons’ hitters, but she’s smart enough that after seeing one swing, she knew whether to work in or out, up or down. And as Greene said, she doesn’t miss any spots.

“We knew this was going to a tough game,” Carter said. “We knew West Rowan would be good, and I’ve seen Arnott before. Two years ago, she was pitching for South Rowan when we faced them in the playoffs and we beat her 2-0, so I know what she can do. She’s a warrior. She was going to battle us.”

That much was clear right away. Arnott kept West Stanly off the scoreboard in the first inning, but she had to throw 25 pitches. Shelby Barbee, who belted 14 homers last season, and Ashlyn Hughes, took some vicious swings and fouled off a bunch of pitches before Arnott got them out.

The second inning was quiet. In the third, Arnott allowed a two-out single to lead-off batter Efird but kept the game scoreless.

When Megyn Spicer walked with two outs in the bottom of the third, she became the Falcons’ first baserunner.

The pivotal moment came in the fourth — without warning. West Stanly had a baserunner with two outs and had Furr, who bats fifth in the lineup, at the plate. Arnott was ahead of her 1-and-2, but then Furr mashed one high and far down the left-field line for a 2-0 lead.

“She’s a good pitcher and I don’t like having two strikes on me, so I was a little nervous,” Furr said. “But then I got a pitch inside. That’s my favorite pitch.”

Greene explained that the Falcons had tried to set up Furr with outside pitches, and then wanted to go in on her hands to finish her off. But she got the bat through the zone in a hurry, and turned that inside heat around. She launched a towering drive.

“We tried to sneak one by her inside,” Greene said, shaking his head. “She crushed it.”

The bottom of the fourth was important. That was West Rowan’s only chance to make noise offensively. The Falcons had two on with one out.

“I hit a batter (Taylor Walton), so that was on me,” Hatch said. “Then we had an error. The important thing was not to panic after the error. We just needed to calm down.”

Hatch handled most of the calming. She struck out Reagan Haggas. Then she struck out Arnott on a riser that sailed up and in on the 6-foot-1 hurler.

The Colts, who have won 56 of their last 60 games, made it 3-0 in the sixth when Barbee, who was leading off the inning, clobbered a 2-and-2 pitch.

“They’re a really good-hitting team,” Arnott said. “And it was a pretty emotional night with everything that’s been happening.”

The Falcons made decent contact in the sixth and seventh, but Hatch finished her no-hitter.

“We’ve only got one senior, but if this was her last game, we weren’t going to lose it,” Hatch said. “That’s what was most important to everyone.”

With the game in the books, both teams looked toward the future. No one knows yet what’s going to happen regarding the COVID-19 threat that shuttered local high sports after Friday night’s games.

“It’s going to be strange the next few weeks because I’ve had workouts or practices or games in some sport every day since I started high school,” Arnott said. “We have a good group of girls, a chance for a great season. I hope we get to play again.”

Greene said he liked West’s energy level against a powerful club and is convinced that the Falcons can do great things. Arnott is special, and while the Falcons (2-1)  have been competing without starters KK Dowling and Allison Ennis, they’ve still got a lot of solid players.

For Carter and the Colts, there’s little doubt they have the horses to make another title run. The million-dollar question right now is will they get to make it. The NCHSAA hasn’t shut things down completely. The organization has kept the window open for a return to action after April 6, depending on the impact of COVID-19.

“We’re blessed with power and pitching and we’ve got great kids who have put in a lot of work,” Carter said. “But there’s nothing we can do for the next few weeks except just try to hang in there. We’ll be hoping and praying that these girls will play again.”