Column: Vince Carter knew end was near, but not this soon 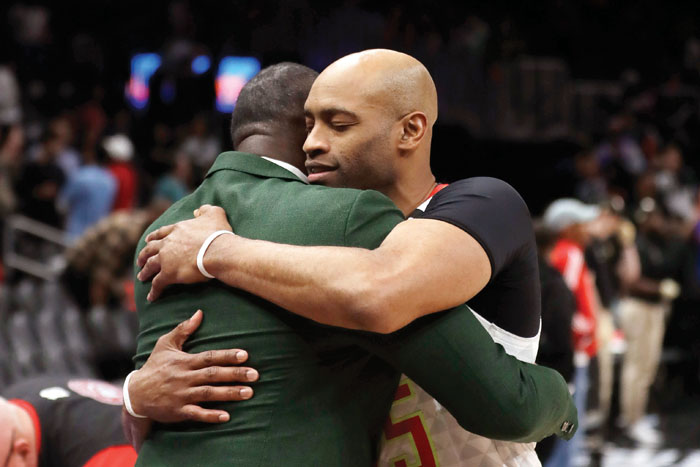 PAUL NEWBERRY AP Sports Columnist
ATLANTA (AP) — Vince Carter leaned back in his seat, dabbed his eyes and struggled to contain his emotions.
He knew his playing days were coming to an end.
Yet, after almost 22 seasons in the NBA, longer than anyone else has ever played the game at its highest level, this still seemed too quick, too sudden.
He kept going back to one word Wednesday night.
“Weird.”
Carter, closing out his brilliant career with the struggling Atlanta Hawks, was a minor piece to the puzzle on an evening of fast-moving developments that brought the fear and misery of the coronavirus to the doorstep of the game he plays.
It started with the NCAA making the shocking decision to play its signature men’s basketball tournament — March Madness and the Final Four — in empty arenas around the land. There are certainly doubts that it will actually be played all.
Then, after word came down that Utah Jazz center Rudy Gobert had fallen ill, the NBA called a halt to its season at the conclusion of Wednesday night’s games, with no timetable for when the schedule might resume with just a month to go before the playoffs.
In the midst of all these momentous decisions and terrifying uncertainty, one of the NBA’s greatest players, the guy who brought us the high-flying thrills of “Vinsanity” and still had an ample amount of game at age 43, was playing possibly his final game.
“There’s so many unintended things that come about from this,” Hawks coach Lloyd Pierce said. “Vince is probably the main one for us. Just understanding that this is kind of a surreal moment. This could be it for Vince. I’m glad the fans were able to remind me of that.”
Indeed, in this world of smart phones and instantaneous news, the NBA’s decision to suspend the season swept through the stands at State Farm Arena and all the way down the court while the Hawks were in the midst of a furious fourth-quarter rally, coming from 23 points down to force overtime against the New York Knicks.
Atlanta star Trae Young heard about it from his father, watching the game at courtside. Teammate John Collins heard about it from a couple of guys on the bench as he was stepping to the free-throw line.
“I didn’t believe it,” Collins said.
It was true, of course.
As the final seconds of what could be the final game ticked down, and the Knicks had secured a wild 136-131 victory, the fans began to chant.
“We want Vince! We want Vince! We want Vince!”
Pierce heard them. Caught up in trying to win the game, the coach suddenly recognized that Carter’s career — which was supposed to last 15 more games — might be actually be ending right here.
After Julius Randle knocked down the first of two free throws, Pierce signaled for Carter to take the court. He checked in while the crowd roared. Randle made one more free throw, then the Knicks left the stage to the NBA’s senior citizen.
Carter dribbled to the top of arc, 26 feet from the basket. The New York players all peeled away, making sure he had a clear look at the 3-pointer.
Nothing but net.
When the horn finally sounded, Carter lingered on the court, doling out careful, hands-free hugs to those who had shown him so much respect.
“Thank you Vince! ” the fans roared, over and over.
“If it ended today,” Carter said, “at least I scored my last basket. It will be a weird but cool memory.”
Maybe it was an appropriate way to go out.
After all, when Carter began his pro career with the Toronto Raptors in 1998, the NBA was in the midst of a bitter labor dispute that wiped out most of the first half of his rookie season.
When Carter finally took the court, he began a dazzling career that featured 10 straight trips to the All-Star Game in his prime and evolved into a role as the league’s sage senior citizen, essentially a player-coach who advised and molded the next generation of stars.
That’s what brought him to Atlanta for the final two seasons of his career. He agreed to join a rebuilding team that had no hope of bringing him his first NBA title — the only real blemish on his resume — but did have talented young stars-in-the-making like Young and Collins.
“Him being here has helped me tremendously, especially with him knowing how to handle the spotlight and the bright lights,” Young said. “I obviously want to play a lot of years in this league. I’m just trying to mimic a lot of the things he does day to day. He’s a great person first. I think that’s why he’s had so much success in the league.”
A ring would have been nice, but Carter is more than fulfilled by having a distinction all his own.
No one lasted as long in the NBA as he did.
Even if he doesn’t get those last 15 games.
“It’s cool,” he said, breaking into a big grin. “Basketball’s been good to me. I’ve enjoyed each and every moment of it, the good and the bad.
“If this is it, it’s all good.”
___
Paul Newberry is a sports columnist for The Associated Press. Write to him at pnewberry(at)ap.org or at www.twitter.com/pnewberry1963 His work can be found at https://apnews.com
___
More AP NBA: https://apnews.com/NBA and https://twitter.com/AP_Sports