Column: The stunning week that sports came to a halt 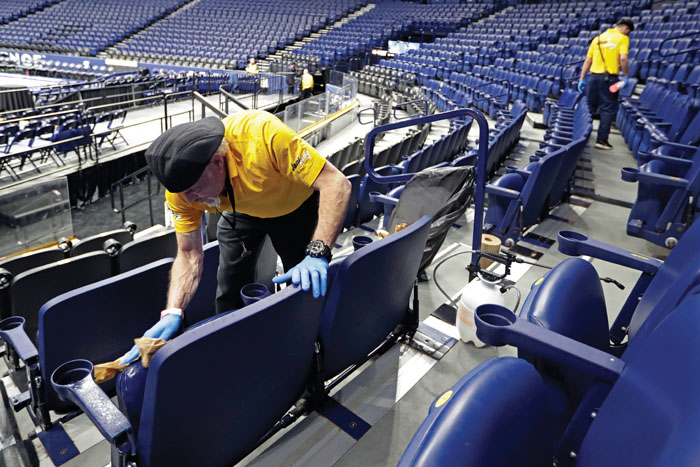 PAUL NEWBERRY AP Sports Columnist
It was the week the sports stopped.
Basketball. Hockey. Baseball. Golf. Soccer. Tennis. Auto Racing. Even football, which is technically out of season but was still around with the fledgling XFL and spring practice on college campuses around the country.
Over these next few weeks, and likely months, we’ll become painfully aware of how much these games mean to so many of us.
From the communal joy of attending a sporting event in person to the barrage of sports programming that usually flooded our TV screens each night, not to mention fretting over fantasy leagues or filling out March Madness pools or simply all that time spent arguing back and forth about our favorite teams, there is now a huge void in our lives.
This was all understandable, of course, given the rapid spread of the coronavirus to nearly every corner of the globe. One way to contain the pandemic is to stay away from large crowds in tight spaces, which effectively ruled out the idea of holding major — even minor — sporting events until this scourge is under control.
The shutdown is unprecedented, certainly in scope and scale. The only parallel in recent memory is 9/11, which brought the games to a halt for about a week nearly two decades ago.
This time, no one knows how long it might last.
At least a month, for sure. Maybe longer.
The rites of spring have already been snatched away.
The NCAA men’s basketball tournament, which culminates with the Final Four, has chosen not to crown a national champion for the first time since its founding in 1939. The Masters won’t be held on the first full week of April, depriving us of a tradition unlike any other. Opening day in baseball, that eternal source of hope, has been pushed back at least two weeks.
“We recognize this decision will affect many people, including our loyal patrons,” Augusta National chairman Fred Ridley wrote in a statement released Friday morning, confirming a postponement of the Masters, which could now be held when the leavers are turning rather than the azaleas blooming. “We seek your understanding of this decision and know you share our concern given these trying times.”
Trying times, indeed.
Our primary concern is for the victims of this virus — most of whom, thankfully, will fully recover — and making sure we protect those who might be in harm’s way.
But it’s hard not to shed a tear for all those people who felt the wrath of the virus without being infected.
Like the Hofstra men’s basketball team.
Hard to believe, but it was only Tuesday that the Pride was cutting down the nets at the end of the Colonial Athletic Association Tournament, having beaten Northeastern to secure what they thought would their first trip to March Madness since 2001.
“I knew that I always wanted to be there, and I’m glad that I’m going to be there with my brothers.” Eli Pemberton said during the celebration afterward, having scored 12 of his 19 points in the second half to help secure the victory.
Less than 24 hours later, the NCAA announced that its tournament would still be held, but without fans. Before even one more day had passed, the NCAA totally called off its signature event, depriving athletes such as Pemberton of what likely would’ve been the shining moment of their entire athletic careers.
“The hardest thing to explain to those guys was what to do with that feeling that something was taken from you, something we earned,” coach Joe Mihalich told Newsday. “We were robbed of the chance to sit there on Selection Sunday and hear our name get called out, find out where we’re going to go. We were robbed of the fun of this week and wondering, ‘Are we going to play Duke in Greensboro or face Villanova or Seton Hall?’ You don’t have the fun of the preparation, having the police escort on the bus to get you to the game. They earned those things.”
Those at the top of the games will still collect paychecks during this shutdown, but what about all the folks in the background who make the experience so enjoyable?
The man who takes your ticket. The women who shows you to your seat. The person who hustles up and down the aisles, bringing us popcorn and drinks.
Matthew Kaminski is one of those folks. He’s built a bit of a cult following with his witty selections on the organ, which he belts out during Atlanta Braves games and other sporting events.
Now, he’s struggling to find work.
“Anyone in need of an organist, accordionist, pianist?” Kaminski asked.
Thankfully, as Fred Rogers once said about times of crisis, always look for the helpers.
They are everywhere.
Cleveland Cavaliers star Kevin Love pledged $100,000 to support arena workers thrown out of a job. Mark Cuban, owner of the NBA’s Dallas Mavericks, told The Associated Press he will “pay them as if the games happened.”
A lot of people are hurting, and every last one of us can be a helper.
Then, at some point, the games will resume.
And we’ll all realize how much we missed them.
___
Paul Newberry is a sports columnist for The Associated Press. Write to him at pnewberry(at)ap.org or at www.twitter.com/pnewberry1963 His work can be found at https://apnews.com ___
AP Basketball Writer Tim Reynolds contributed to this report.