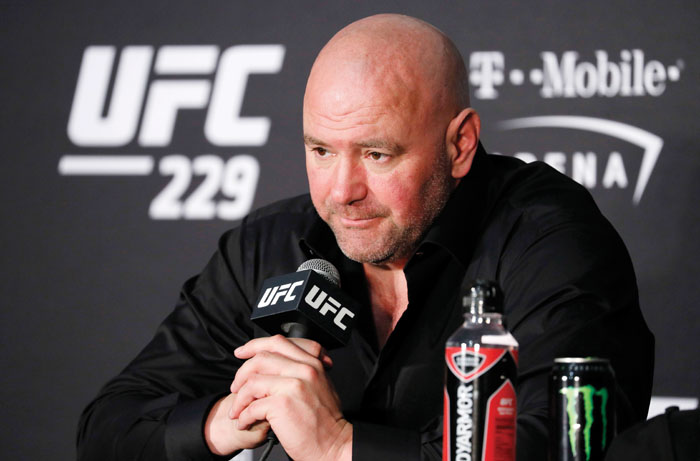 FILE - In this Oct. 6, 2018, file photo, Dana White, president of the UFC, speaks at a news conference after the UFC 229 mixed martial arts event in Las Vegas. The UFC is determined to fight on amid the worldwide coronavirus outbreak. The UFC hasn't canceled any competitions, even those previously scheduled for areas where large gatherings are now banned. White attributes his decision to go against the sports world's collective mindset partly to a conversation Thursday, March 12, 2020, with President Donald Trump and Vice President Mike Pence. (AP Photo/John Locher, File)

By GREG BEACHAM AP Sports Writer
LOS ANGELES (AP) — The UFC is determined to fight on amid the coronavirus pandemic.
While leagues and organizers across sports canceled or delayed competition this week, the UFC proceeded with its plans to hold a fan-free event Saturday night in Brasilia, Brazil. Next weekend, the promotion still plans to stage a full fight card with fans inside London’s O2 Arena.
The UFC hasn’t canceled any competitions, even those previously scheduled for areas where large gatherings are now banned. Instead, the promotion has moved events scheduled for March 28 in Columbus, Ohio, and April 11 in Portland, Oregon, to the new UFC Apex complex in Las Vegas, where it has a small arena and television production capabilities.
UFC President Dana White attributes his decision to go against the sports world’s collective mindset partly to a conversation Thursday with President Donald Trump and Vice President Mike Pence. White and Trump are longtime friends and business associates.
“I talked to the president and the vice president of the United States about this,” White said on ESPN, his promotion’s broadcast partner. “They’re taking this very serious. They’re saying, ‘Be cautious, be careful, but live your life and stop panicking.’ Everybody is panicking, and instead of panicking, we’re actually getting out there and working with doctors and health officials and the government to figure out how we can keep the sport safe and how we can continue to put on events.”
The UFC won’t have fans in the stands, but the competition will go on — and more importantly to the fighters, they’ll get paid in a sport with no financial compensation unless a fight actually takes place.
White said the UFC will monitor its fighters for symptoms of coronavirus before allowing them to compete.
“We’re always looking out for the health and safety of our fans, our athletes, whatever it might be,” White said. “This thing going on, we’re going to do the same thing. We’re going to make sure that two healthy athletes are competing, and these guys are good to go.”
For most people, the new coronavirus causes only mild or moderate symptoms, such as fever and cough. For some, especially older adults and people with existing health problems, it can cause more severe illness, including pneumonia.
The vast majority of people recover from the new virus. According to the World Health Organization, people with mild illness recover in about two weeks, while those with more severe illness may take three to six weeks to recover.
Combat sports are among the most elemental competitive events, with just two fighters and a referee in a cage or ring surrounded by three judges and relatively few vital support personnel. That’s a big reason why the UFC believes it can continue while the rest of the sporting world grinds to a halt.
They’re also unlikely to get significant resistance from the fighters, who largely need the paychecks.
“I would bet more than half of fighters would expose themselves to coronavirus before not getting to fight,” UFC welterweight Anthony Rocco Martin said. “We aren’t union and don’t get paid to not fight. Most spend all their money getting to their next fight.”
White stands increasingly alone among sports’ power brokers in his perception of the pandemic. NASCAR and the PGA Tour scrapped planned events Friday, a few days after nearly every team sports league in North America had abandoned hopes of regular competition in upcoming weeks.
Even the world’s smaller mixed martial arts promotions changed their plans, with Bellator postponing a planned fan-free show Friday in Uncasville, Connecticut, just a few hours before it was scheduled to start.
“I’m good with fighting in an empty arena,” tweeted Kevin Lee, who will compete in the main event in Brasilia even after missing weight by 2 1/2 pounds Friday. “Let’s not panic too crazy, let us fight, entertain the people stuck at home.”
Even boxing, with its notoriously fractious politics and headstrong leadership, has largely halted.
Top Rank had two shows headlined by its elite young talent scheduled for New York in the next week. Former U.S. Olympian Shakur Stevenson was supposed to defend his featherweight title Saturday in an ESPN fight, and Ireland’s Michael Conlan was to fight on St. Patrick’s Day on the ESPN+ streaming service.
After initially announcing plans to hold the shows without fans, Top Rank scrapped them altogether Thursday.
Top Rank boss Bob Arum attributed the cancellations to a lack of available tests for coronavirus, saying he could have staged the shows if he could guarantee the participants’ health.
“Unless something is done in the country, we’re not going to see sports for a long, long time,” Arum said. “It’s really the testing. There’s no reason the March Madness couldn’t be on if everybody was assured there was adequate testing for all the participants. … Obviously you can’t test every spectator, but you can certainly test the fighters and corner people as long as you have tests.”
Unlike White, Arum has been at odds with Trump for many years, and he campaigned aggressively against the former casino owner in 2016.
“The system is a mess, and a mess because there’s no leadership,” Arum said. “If we had a normal president, we’d have the leadership.”
___
AP Boxing Writer Tim Dahlberg contributed to this report.
___
More AP sports: https://apnews.com/tag/apf-sports

Local high school sports are suspended until at least…