The road to the Masters leads nowhere as golf shuts down 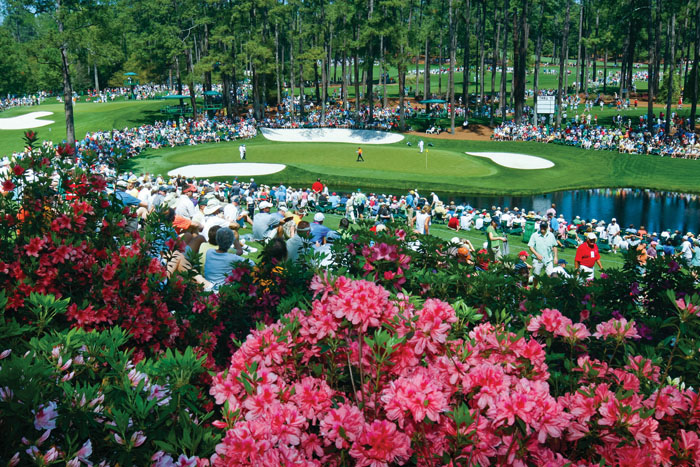 FILE - In this April 4, 2011, file photo, golf fans watch practice on the par three 16th hole during a practice round for the Masters at Augusta National Golf Club in Augusta, Ga. Augusta National decided Friday, March 13, 2020, to postpone the Masters because of the spread of the coronavirus. Club chairman Fred Ridley says he hopes postponing the event puts Augusta National in the best position to host the Masters and its other two events at some later date. Ridley did not say when it would be held. (Tim Dominick/The State via AP, File)

By DOUG FERGUSON AP Golf Writer
PONTE VEDRA BEACH, Fla. (AP) — For the last 75 years, the golf landscape never changed. March brought anticipation of azaleas and Amen Corner, of the drive down Magnolia Lane and the chase for a green jacket.
The annual road to the Masters took a major detour Friday — but not a dead end, like other tournaments — when Augusta National said the Masters would be postponed because of increasing risks with the new coronavirus.
It was expected, but no less jarring, even as the Masters joined other big sporting events that were suspended (NBA), delayed (Major League Baseball) or canceled (NCAA basketball tournament).
Xander Schauffele was quick to find hope.
“Well, postponed is a comforting word,” Schauffele said. “Canceled is another.”
Augusta National offered no details except for Chairman Fred Ridley saying he hopes the postponement puts the club in the best position to safely host the Masters “at some later date.”
The announcement capped off 24 hours that began with hope golf could be played without fans and ended with the reality that it had to follow along with other sports and step away.
Even the Masters.
PGA Tour Commissioner Jay Monahan said his “gut-wrenching” decision to cancel the rest of The Players Championship this week and the next three tournaments on the schedule was based largely on Orlando’s theme parks shutting down and travel for the international players.
“Even though we have a safe environment and we’ve done all the right things, we can’t proceed,” Monahan said. “It’s not right to proceed.”
That got little argument from the players, who suspected this was coming.
Rory McIlroy, the world’s No. 1 player, preached the importance of everyone getting tested for the virus and saying golf would have no choice but to shut down if anyone — a player, caddie, support staff — tested positive.
That was on Thursday night, after he closed with three straight birdies. He went to bed before the tour’s decision to shut down golf and woke up Friday to several text messages that left him wondering when he would tee it up again.
“You’re obviously going to still keep playing golf, but you’re going out there practicing and not knowing what you’re practicing for,” McIlroy said as he headed into the TPC Sawgrass clubhouse to clean out his locker.
The PGA Tour has canceled four tournaments, one in the Dominican Republic. The LPGA Tour, which already lost three tournaments on its Asia Swing, said it was postponing its next three events in Arizona and California, the last one the first major championship of the year.
The next tournament on the European Tour schedule is in the south of Spain at the end of April.
It’s not unusual for players to have a month off with nowhere to play, just not in the heart of the season.
“This is obviously new territory,” said J.T. Poston, who was anticipating his first time playing the Masters. “I can’t remember the last time I didn’t really know when I was going to play my next golf tournament or when I didn’t have a golf tournament that I could look forward to playing.”
McIlroy’s coach was planning to fly from Ireland next week so they could prepare for the Masters, the major keeping him from the career Grand Slam. That’s been scrapped. All that’s on McIroy’s immediate agenda is getting tested for the virus.
Bernd Wiesberger of Austria was trying to get the last flight to Vienna. He left before the Masters was postponed, which was just as well. Wiesberger figured he would not have been able to return to the U.S. to play.
Scrapping the Players Championship also was a blow to the tour because it’s the biggest event — “our Super Bowl,” Monahan said — of the 44 tournaments it operates. Because only one round was played, the $15 million purse was to be cut in half and distributed evenly among the 144 players — $52,083 each, unofficial money.
That doesn’t include C.T. Pan, who withdrew a few hours before his tee time to reduce the risk of catching the virus.
U.S. Open champion Gary Woodland was among those who felt it would have looked bad if the tour had kept playing, even though Monahan suggested it could be a “source of inspiration” to have a live sport on television if done in a safe manner.
“It would have looked horrible if we showed up and played today with every other sports league not playing,” Woodland said. “It probably would have been insensitive, so I’m glad Jay made the decision that he did. It’s best for us. It’s best for the fans and our families. … It’s only going to get worse right now, so it’s best for us not to be playing golf.”
For most people, the new coronavirus causes only mild or moderate symptoms, such as fever and cough, with the vast majority recovering in about two weeks.
“I think there’s bigger problems in the world right now than whether we play the Masters or not,” Jon Rahm said.
They also didn’t know what they would do. Kevin Na said the tour shutting down and the Masters not being played the first full week in April had not sunk in. And then he was cleaning out his locker and his caddie found a banana in his bag.
“If he hadn’t pulled that banana out,” Na said, “that banana would have been in there for a long time.”
___
More AP golf: https://apnews.com/apf-Golf and https://twitter.com/AP_Sports