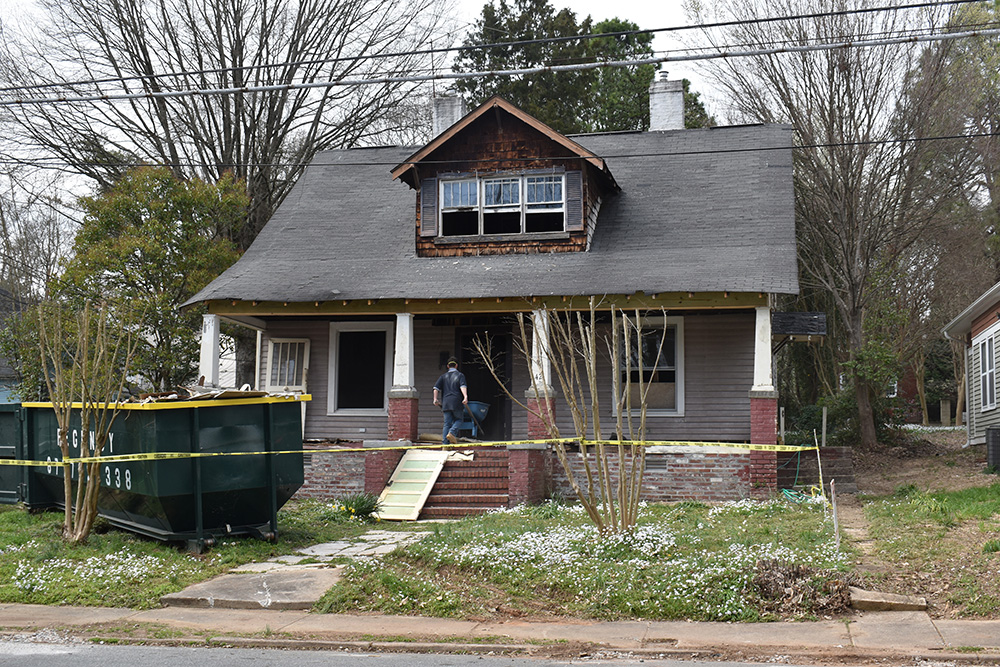 The Historic Preservation Commission delayed the demolition for six months of the 420 S. Jackson St. home in order for the owners to bring the house up to to minimum housing code.

Michael Cotilla, a city code enforcement officer, said the home has not met minimum housing codes. The city started talking with the property owners in 2016 about the house’s violation. The next year, a staff liaison, Cotilla and the owners met to discuss the violation and planned to bring the house into compliance.

At that time, work on the home began at “a rapid pace,” Cotilla said. Then the work began to decline after a couple weeks and completely stopped.

When the owner was alerted about the commission meeting in February about the demolition of the home, work started up.

Cotilla said the property qualifies for demolition or at least a delay of 365 days to allow for property owner to finish all the work to bring it into compliance, sell the property, self-fund the demolition or allow code services to work with the commission to salvage any materials that hold historic significance before demolition.

The Historic Preservation Commission cannot prevent the demolition of properties, but can grant a stay of demolition for up to one year.

Walter Omar Garcia Valenzuela, the owner, asked the commission for another opportunity. He said he currently cannot fix the outside of the house until he can level the floor. Once he is completed the commission will see his “incredible work.”

“Everybody here on this commission wants to save all historic properties,” said Chair Andrew Walker.

“The work needs to progress for the property to be saved,” he later said.

Neighbors spoke about the poor condition of the home. Mark Soeth said he walks his dog past the home and he is “sick of looking at it.” He recommended a six-month delay on a demolition because of Valenzuela’s track record.

Karen Hobson said the Historic Salisbury Foundation has tried to help the 420 S. Jackson St. homeowner since 2018. There has been a lot of turnover in owners of neighboring properties because of the state of the home, she said.

“I’m not sure what it takes to have this property put in a reasonable condition,” Hobson said. “I, for one, am not comfortable that the property owner is going to do anything.”

Lori Burke, a contractor, said she has concerns about asbestos and lead from the home being properly disposed.

Matt Beaver said he recommended giving the owner a short timeline, six months, until proceeding with the demolition.

Commission Member Will James asked if Valenzuela knew the cost of the repairs and whether he had secured financing.

Valenzuela replied it would cost $128,000 and that he would be able to pay for it.

Most of the commission members were in favor of a delay, but wanted it to be less than the maximum 365 days to “put a fire under him.”

The commission also granted a delay for 365 days of a house demolition at 312 S. Long St.

William Arnette, the owner, said he was “trying to do the house right.” He told the commission he has been replacing the materials with “like for like,” which is included in the commission’s guidelines.

Anne Lyles said she has lived across from the property for years. Neighbors care about the property because it’s on the site of the Civil War prison and one of the escape tunnels opened up under the house, Lyles said.

“I do hope something can be worked out,” she said.

Commission member Sue McHugh said the second house was different than the previous case because it is the only house facing Long Street and has historical significance.

The commission told Arnette he needs to get the home inspected by Rowan County before he proceeds with any more work.

Salty Caper planning to reopen in early April with…