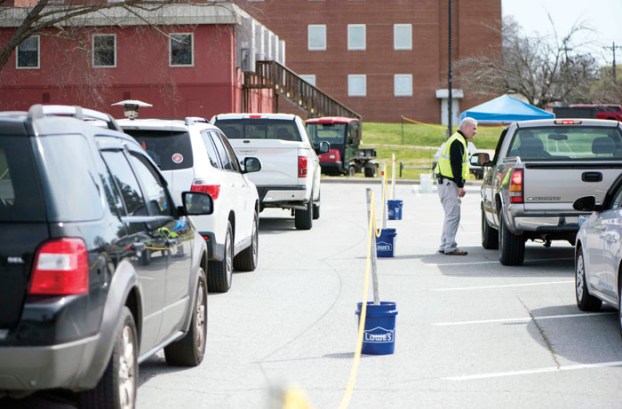 Salisbury Post file photo - VA Employee Tim Draper (right) asks questions to those needing to get on the VA campus in March after the facility began asking screening questions for COVID-19.

Quotes of the week: ‘This is something that’s new’

“In my lifetime, this is something that’s new.”

— Ricky Murdock, a 66-year-old Army veteran who was subject to additional screening on Monday when he arrived for an appointment at the Salisbury VA.

“System wide, the district has been losing students for a little while. You actually are bucking the trend a little bit this year, not losing as much as the forecast was.”

— Mike Miller, a consultant who is working with the Rowan-Salisbury School System on redistricting scenarios.

— Craig Pierce, who was speaking about why he didn’t spend a large amount of money.

“The problem now is we can’t catch up because we have people leaving so fast through retirement or resigning or getting fired.”

— Garrett Barger, a first sergeant for the N.C. Highway Patrol who was speaking about a shortage of officers locally and across the state.

“I knew it was a gift when people would give me money for it. When collectors came from New York, I knew there was something special about my work. It’s really God’s work. I am the vessel.”

— James Donaldson, an artist whose work hangs at the University of Delware and in collections up and down the eastern seaboard. He was the first and only black man to join the Rowan Art Guild.

“What we’re looking for is to put people to work. We think it’s been an excellent return on investment.”

— Jim Greene, vice chairman of the Rowan County commission. Greene was talking about a job training program to which commissioners allocated $100,000 this year.

“Frankly, for the town of Spencer, that is the gateway into our county and into our town.”

— Jonathan Williams, mayor of Spencer, who is  optimistic about the potential for development on the former site of the N.C. Finishing Company on the Yadkin ‘River.

There’s room for improvement when, in a state with more than 10 million people, only a few dozen have been... read more