Local high school sports are suspended until at least April 6 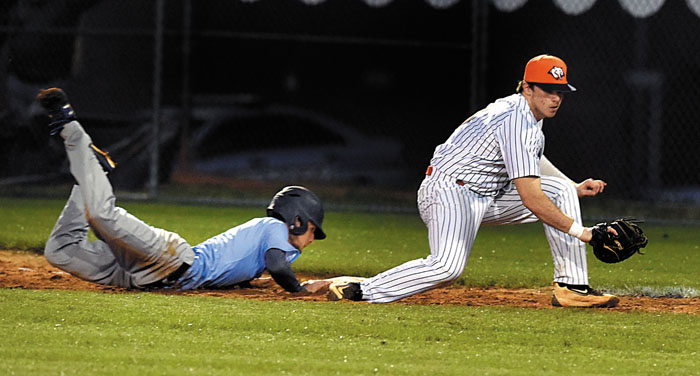 Wayne Hinshaw file photo/for the Salisbury Post ... After tonight, scenes like the one above won’t happen again until at least April 6. The NCHSAA has suspended high school and middle school athletics due to concerns about the spread of the coronavirus. The action above is from a baseball game last year, with West Rowan’s Michael Molenda diving back into first base as Carson first baseman Logan Rogers takes a throw from the catcher.

SALISBURY — In addition to professional and collegiate athletics, concerns about the spread of the coronavirus has also impacted the local sports scene.

On Thursday afternoon, the North Carolina High School Athletic Association suspended all athletic events, effective late Friday night and running through April 6. The suspension of athletics includes workouts, practices and games. The NCHSAA says its board of directors “will assess this situation regularly over the next few weeks.”

In a statement, NCHSAA commissioner Que Tucker said, “Any decision we make must err on the side of caution.”

There is worse news for local colleges, Catawba and Livingstone. The NCAA issued a statement on Thursday, canceling the remaining winter championships and all spring championships for NCAA Divisions I, II and III.

Rick Vanhoy, Rowan-Salisbury Schools’ athletic director, said any games scheduled for Friday will be allowed. At midnight Saturday, the suspension begins. It will go for the next three weeks.

“This is for all Rowan County high schools and middle schools,” Vanhoy said, late Thursday. “No practice, no skill development, nothing. … In all honesty, we’ve been waiting for guidance from the state. The state is just falling in line with with everyone else, like the ACC and NCAA. We’re dealing with something that most of us have never had to deal with.”

Vanhoy, himself a former athlete at East Rowan High School and the University of North Carolina, acknowledges that some fans could question the NCHSAA’s decision.

“It may seem to some like an overreaction, but if a month from now, if things have settled down and we’re all ok, so to speak, I don’t think anyone is going to believe it was an overreaction at that point,” he said. “If we kept on playing and getting crowds together and it continues to spread, then you’re asking different questions. I think (the NCHSAA) made the right decision.”

Prior to the state’s ruling, Vanhoy said that there had been discussions among the six county ADs about playing games without spectators. That scenario was not ideal either.

“The county ADs expressed to me that playing games without fans would have actually been a bigger financial burden on the schools than simply not playing at all,” he said. “Having to pay officials and travel expenses with no admissions coming in would have been a huge burden on our schools. Obviously, any money schools can make athletically is a plus, but this way there will be no expenses without revenues to support them.”

Now, the county schools’ athletes have some time off.

Vanhoy said he feels for the students.

“It’s tough,” said Vanhoy. “Athletics are a big part of all of our schools. It gives a lot of kids the opportunity to be a part of something. And our spring sports were just getting underway.

“You hate it for the kids, because they work all year and now the season is here. And we don’t know if we’ll get to resume at all and that would be bad, especially for the seniors, because they’re not coming back next year. But we don’t know what a month will do.”

One of those seniors, Carson’s Taylor Conrad, who has played year-round in cross country, basketball and soccer, tweeted on Thursday afternoon: “What am I supposed to do without practice or games? I’ve never just went home after school with no sports.”

The shutdown is reminiscent of Rowan County’s measles outbreak quarantine in 1988-89. The health department limited gatherings in the county from late-December through mid-March, basically canceling basketball and wrestling seasons — at both the college and high school levels. The quarantine was eventually lifted in time for spring sports.

The Associated Press contributed to the article.