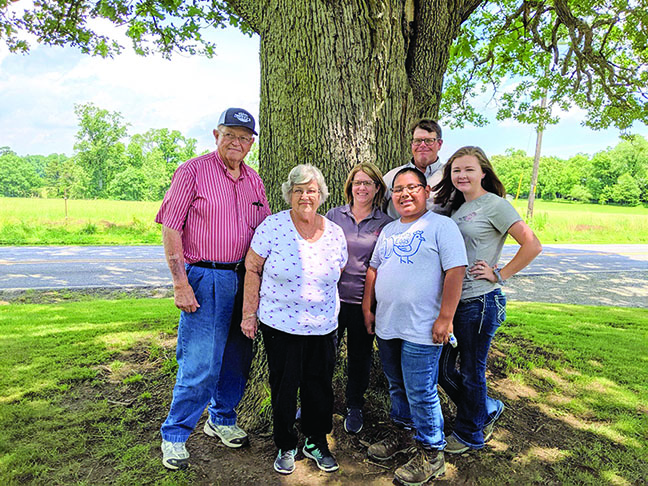 Submitted photo The Correll family has won the Conservation Farm Family of the Year, and includes several generations of Corrells.

The first time I visited the Correll Farm, we were greeted by a smiling David Correll and his wife, Cheryl, who are the primary managers of the farm.

It was a warm spring day — peaceful with a scattering of barns and greenhouses, row crops, cows grazing in the distance, and the faint sound of chickens from a yet undetermined location.

David’s father, Sam, and uncle, Eubert, the fourth generation of Correll farmers, were also there to greet us. Many people stop by the farm to pick up a box of produce, but we were there for a different reason.

The judges were very impressed, and the Corrells were selected as the Mountain Region winners which put them in the running for the statewide competition. For the second round of judging, Cheryl had a beautiful display of the produce they grow, awards they have received, and pictures of the family and farm.

David led a thorough tour of the farm, where he pointed out some of their conservation farming practices such as no-till farming, cover crops, grassed waterways and field borders. They have used many of these practices since the farm’s first conservation plan was written in the early 1960s.

The Correll’s’ children, Talton and Josie, also led portions of the tour, and along with David’s brother, Bryan, have active roles in the daily operation of the farm.

They have hosted farmers and visitors from other countries and local, state and national political leaders. They have also assisted with crop research by planting test plots of various crops.

The Corrells are passionate about advocating for agriculture, and we would like to thank them for doing their part to be good stewards of the earth, for being positive examples for other farmers, and for seeing the value in education. We would also like to congratulate the Correll Family for being the Mountain Region winners and runner up in the state for 2019 Outstanding Conservation Farm Family of the year.