Ann Farabee: I can’t do this 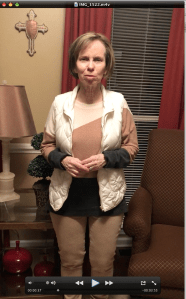 See the video at https://www.youtube.com/watch?v=T-9TWwIOrhI

The phone rang. My world came to a standstill.

My 23 year old brother’s car had gone airborne, as he ran a stop sign. It wrapped around a tree at the bottom of a hill. The car he had dreamed of – and saved for as a teenager – was now a mangled mess.

So was his life.

When I was first allowed to see him in intensive care, he was unrecognizable. The clicking, whooshing, and rhythm of the machines that were keeping him alive paralyzed me with fear.

His brown eyes followed me, as I walked from one side of his bed to the other, trying to adjust anything and everything that I thought may bring him comfort.

I held a cup with a straw for him to sip some water. His mouth had been wired shut, due to injuries. As I was leaned in toward him, with tears sliding down his cheeks, he whispered four words, “I can’t do this.”

I knew he couldn’t do it – because I couldn’t do it, either.
The doctors agreed, for they expressed that his chances for survival were slim.

He got my attention again with his eyes. I saw his lips move. I edged closer and heard three more words, “Pray. For. Me.”

He was trying to stand on my faith at that moment – but my faith was barely existent. I was weak and I knew it.

Day after day. Night after night. His words rang out in my heart, “Pray. For. Me.”

His urgent need – and those pleading eyes took me to a place of persistent prayer.

One day, I was allowed to wheel him outdoors. I watched him look up at the sky for the first time in months. As he did, this verse came into my spirit, “I will lift up mine eyes unto the hills, from whence cometh my help. My help comes from the Lord, who made heaven and earth.”

Small improvements became big improvements. Eventually, one major physical concern remained. His leg had been crushed in the accident. It was bent beyond repair and had a dangerous infection.

He was sent home, with the assistance of a home health nurse, where efforts to save his leg would continue.

Months crawled by, and we began to know.
The antibiotics were not working.
The leg needed to be amputated.

The three year battle had been lost.
It felt like hope had not turned into victory.
The answer to our prayers was not the answer we prayed for.

As I walked alongside the bed as they wheeled him to surgery, there was something in his eyes that had not been there three years earlier, when the battle had begun.

They stopped for a second, and our eyes met, as he said, “I can do this.”

He then cracked a joke about being a one-legged man, as the hospital staff surrounding him laughed and shook their heads.

Thirty-five years later, he is in heaven, and I believe the encouraging words he would send to us would be, “You can do all things through Christ. He will give you strength.”

And if I could say something to him, I think it would be in the form of a question, “How are you enjoying walking around heaven with two legs instead of one?”

I guess victory did come after all.