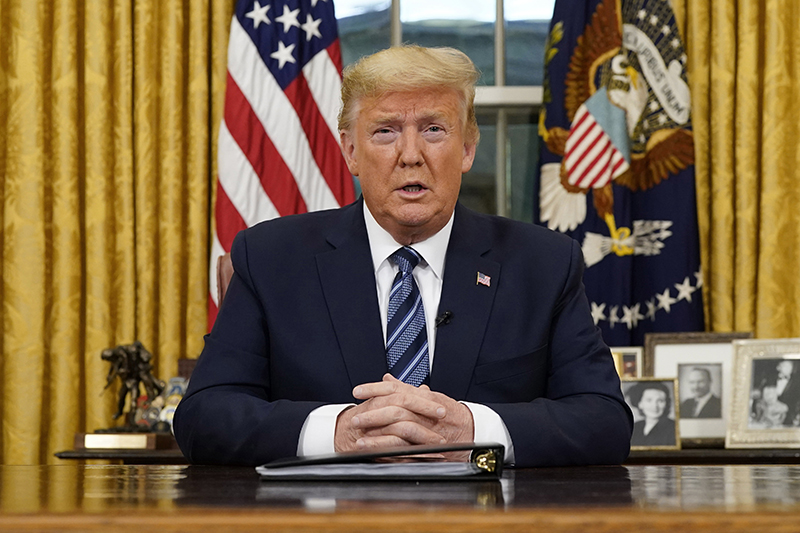 President Donald Trump condemned the violence carried out in his name a day earlier at the Capitol. Then, for the first time on camera, he admitted his presidency would soon end. (File photo by Doug Mills/The New York Times via AP, Pool)

WASHINGTON (AP) — Taking dramatic action, President Donald Trump announced Wednesday he is sharply restricting passenger travel from 26 European nations to the U.S. and moving to ease the economic cost of a viral pandemic that is roiling global financial markets and disrupting the daily lives of Americans.

Trump, in a rare Oval Office address to the nation, said the month-long restriction on travel would begin late Friday, at midnight. After days of playing down the coronavirus threat, he blamed Europe for not acting quickly enough to address the “foreign virus” and claimed that U.S. clusters were “seeded” by European travelers.

“We made a lifesaving move with early action on China,” Trump said. “Now we must take the same action with Europe.”

Trump said the restrictions won’t apply to the United Kingdom, and there would be exemptions for “Americans who have undergone appropriate screenings.” He said the U.S. would monitor the situation to determine if travel could be reopened earlier.

The State Department followed Trump’s remarks by issuing an extraordinary global health advisory cautioning U.S. citizens to “reconsider travel abroad” due to the virus and associated quarantines and restrictions.

While Trump said all European travel would be cut off, Homeland Security officials later clarified that the new travel restrictions would apply only to most foreign nationals who have been in the “Schengen Area” at any point for 14 days prior to their scheduled arrival to the United States. The area includes France, Italy, German, Greece, Austria, Belgium and others, and the White House said the zone has the highest number of confirmed COVID-19 cases outside of mainland China.

The restrictions don’t apply to legal permanent residents, immediate family of U.S. citizens or others “identified in the proclamation” signed by Trump.

Trump misspoke when he said the prohibitions would “not only apply to the tremendous amount of trade and cargo, but various other things.” The official proclamation released after Trump spoke made clear it applies to people, not goods and cargo.

The Oval Office address represented an abrupt shift in tone from a president who has repeatedly sought to play down the severity of the virus outbreak. Many Americans shared a similar mindset in recent weeks, but the grueling events of Wednesday changed the mood: Communities canceled public events nationwide, universities moved to cancel in-person classes, and families grappled with the impact of disruptions to public schools. The number of confirmed cases of the infection topped 1,000 in the U.S. and the World Health Organization declared the global crisis is now a pandemic.

The vast majority of people recover from the new virus. According to the World Health Organization, people with mild illness recover in about two weeks, while those with more severe illness may take three to six weeks to recover.
Congress’ attending physician told staff there could be 70 million to 100 million coronavirus cases in the U.S. That’s on par with other estimates. A Harvard official has estimated that 20% to 60% of adults will get the virus, noting it’s “a pretty wide range.”