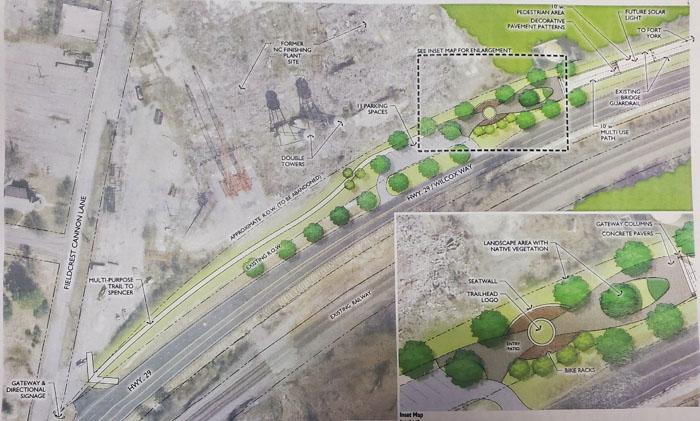 SPENCER — Excitement is building on the banks of the Yadkin River in northern Rowan County.

A group named Waterford Funding LLC on Feb. 28 bought the former site of the N.C. Finishing Company, off of U.S. 29 north at the Rowan-Davidson line, for $3.5 million, according to the Rowan County Clerk of Court’s Office. The sale, which occurred on the courthouse steps, closed at 5 p.m. Monday after an upset bid process ended with no further offers for the property.

That sale also occurred as the town of Spencer is planning to make enhancements on the Rowan County side of the Will-Cox Bridge. And the two items combined have Spencer officials thinking about the kinds of development that are possible.

“We’ see it as a real opportunity, Spencer, for an economic development standpoint … and we’ve got a huge opportunity to do something with community connectivity,” said Spencer Mayor Jonathan Williams.

“We are thrilled about it as a town. Frankly, for the town of Spencer, that is the gateway into our county and into our town,” Williams said.

According to the N.C. Secretary of State’s office, Waterford Funding is registered to an address on Murchinson Road in Fayetteville. It was formed in March 2019, with M B Blankenship Jr., of Woodleaf, listed as an organizer and Ken Fleming as its registered agent.

Fleming was also listed as a managing member of the group that previously owned the N.C. Finishing Company site — Fennegan and Murphy LLC. Another managing member of the previous group was Donald Rand, of Rowan County, and Spencer town officials said they’ve met with Rand about future plans for the site as well.

Fennegan and Murphy LLC was dissolved in 2016.

“It’s really our greatest opportunity for economic development,” Williams said. “That’s why we, as a town, are supportive of the project.”

For its part, the town of Spencer is planning a walking trail and parking area adjacent to the former N.C. Finishing Company at a cost of $101,480. The site would include a stone pathway, landscaping, a kiosk, trash receptacles and benches. And notably, it would connect to an existing park created by Davidson County government on the north side of the river.

Town Planner Joe Morris said Spencer was encouraged to apply for a $50,000 Robertson Foundation grant. It hopes to hear about the status of its application by April. The town is also planning for funding through a group led by philanthropist Ronnie Smith, who has already funded surveying work at the site community philanthropy and local government contributions from entities other than Spencer.

While there are N.C. Department of Transportation plans to help create a greenway that starts at Grants Creek, runs down Third Street, turns onto U.S. 29 and heads to the river, Morris said there hasn’t been any funding allocated to the project yet.

Whatever the mix of funding, Morris said he is confident that Spencer will develop a trailhead on the Rowan County side of the river. And Williams said the project is “very very important” to the town board.

“But it is also very important for our town board to make sure multiple parties are sharing in that funding, not just the town funding it all,” Williams said. “We look at this as becoming a community and a county amenity.”