Rowan did its part for WWII, sending scrap, protecting the Yadkin River 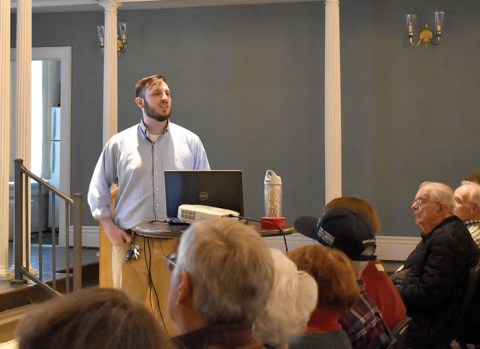 Deirdre Parker Smith/Salisbury Post Evin Burleson, curator at Rowan Museum presents 'Rowan County in the War Years' as part of the Victory 45 events by the museum and Rowan Public Library. 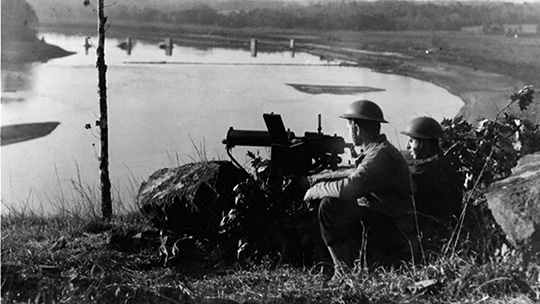 Rowan Museum A gun emplacement along the Yadkin River in Rowan County during Warld War II. 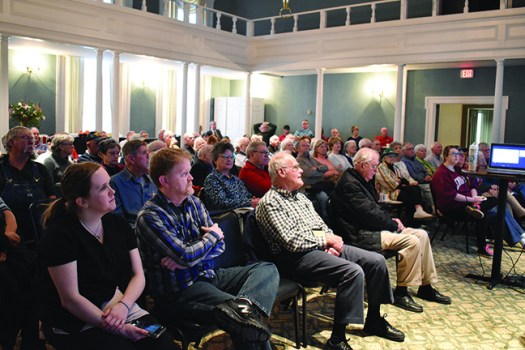 Burleson detailed how Rowan and North Carolina fared during World War II as part of the Victory 45 lecture series sponsored by Rowan Museum and Rowan Public Library to commemorate the 75th anniversary of World War II.

Once the U.S. realized it was a matter of time before we became involved n the war, they raised a 5% “victory tax.” And all sorts of goods were subject to an excise tax.

Burleson said the war effort pulled us right out of the Depression, staring in 1938. Farmers were getting more money for their crops, wages were increasing and manufacturing was on a roll.

War bonds went on sale in May 1, 1941, with Salisbury Post carriers selling them on their routes.

Meanwhile, airplane spotlights were installed on top of what is now the Plaza in downtown Salisbury. Machine gun posts were embedded near the Yadkin River Bridge.

In other parts of the state, the U.S. Army began training maneuvers. They had to lear to se tanks and artillery.

Burleson said one of his favorite stories he discovered was that Elizabeth Hurley, for whom Hurley Park is named, grabbed an ax when she heard about the Pearl Harbor attacks and chopped down the Japanese cherry trees she had just planted.

Newspaper gave advice about what to do during an air raid. The Salisbury Post wrote an article that said just because someone has an accent does not them them a spy.

Burleson said that conscientious objectors, including Quakers andJehovah’s Witnesses were often give war-related jobs stateside. “A lot of Quakers ended up building the Blue Ridge Parkway through the Civilian Public Service.”

More than 360,000 North Carolinas served during the way, including 3,000 from Rowan County. North Carolina led the nation in draft rejections, though, Burleson said, due to poor health, illiteracy and being over- or underweight.

North Carolina suffered from the same German U-Boat attacks that plagued the East Coast, but four of them were destroyed off the coast, the most of any state. Cape Hatteras was nicknamed Torpedo Junction.

Rowan felt the war shortages, with only 3 gallons of gas allowed weekly. Speed limits of 35 mph were enforced, and travel decreased by 25%. More people rode bicycles, as pleasure driving was banned in 1943.

Schools, including Boyden High School gave up their typewriters for the war effort. Not only did the military need them, they were made of metal, which could be melted down for munitions.

Folks in Rowan, and across the U.S., were limited to three pairs of shoes per year. The Salisbury Post had advertisements from Belk-Harry and Oestreicher’s for half-soles to keep the shoes in tact.

Many of those ads had patriotic themes and artwork.

Celebrities traveled all over the country selling war bonds. The Trapp Family of “Sound of Music” fame came here in 1942, before the movie made them famous. Eleanor Roosevelt came to Livingstone College for a conference in 1942.

One of the better know incidents of the war was the crash of a B-25 bomber in  Badin Lake, where it remained for decades.

Polio began to spread to North Carolina in 1944, moving east from Hickory.

But people here did their best to help. Burleson said 90% of Boyden High School students bought war bonds in 1942. Then, in 1944, Salisbury had a tremendously successful campaign, raising $4,251,737 in war bonds.

To help with the war effort, Burleson said Salisbury was the first city in the state to scrap its trolley rain lines. Also scrapped were a German World War I cannon, a 1904 steam pump fire truck, an old toll bridge on the Yadkin, a Civil War era safe, and more.

By December 1942, Rowan had the highest scrap per capita of any county in what was then the 9th congressional district — 148.3 pounds per person.

Among other items scrapped were a hammer used on a World War I Navy ship, brass knuckles used for protection while working on the railroad and an artificial leg, all coming from Mr. H.N. Parrish, whose husband had died.

Businesses like Alcoa, which produced aluminum, and Cannon Mills, which made cotton, as well as Hanes Hosiery, which shifted its production to shirts and underwear, hired more women and focused on what was needed for the war.

Roosevelt died in April 1945; his funeral train passed through Salisbury. We missed out on a veteran’s hospital, at least until the 1950s, but textiles continued to rule for almost 40 years. Literacy improved, as did work experience, and Rowan recovered.