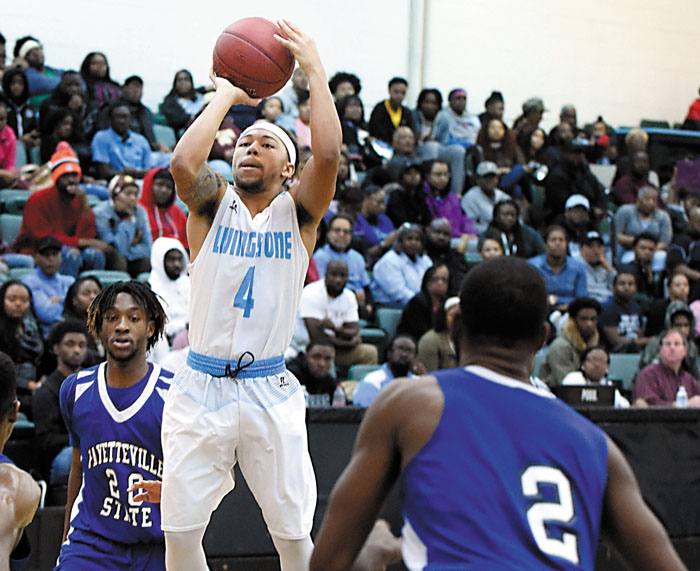 Wayne HInshaw file photo/for the Salisbury Post ... Livingstone senior Roger Ray (4) was the CIAA’s Player of the Year this season. He concluded his career with 2,007 points, the all-time record at Livingstone.

SALISBURY — The basketball season didn’t go all that well for the Livingstone men’s basketball team, but you could say that star guard Roger Ray made the most of it.

Ray, a senior from Raleigh, was voted the CIAA’s Player of the Year, even though the Blue Bears finished with a 13-17 record. He scored 698 points, averaged 23 points per game and became his school’s all-time leading scorer.

The 5-10 guard scored in double figures in all 30 of the Blue Bears’ games, hitting 30 points or more in seven of those contests. He also scored 20 or more points in 20 games.

Ray set the Livingstone career scoring record early in the season — on Dec. 5, with a 45-point performance in a 128-122 double-overtime win over Virginia State.

The Blue Bears’ season finale came on Feb. 27, a loss to Winston-Salem State in the CIAA Tournament quarterfinals in Charlotte. Ray scored just 11 points in that contest, but it lifted him to a career total of 2,007.

But the points are a little hollow for Ray. After coach James Stinson’s team went 17-12 in 2018-19, coaches voted Livingstone to finish atop the league’s Southern Division.

The respect made sense. The Blue Bears were returning virtually the same team this season. However, Livingstone stumbled to sixth-place in the division and went 5-12 in league games.

“It’s a bittersweet feeling to be done,” Ray said last Thursday, on spring break in Raleigh. “It was a tough season and we just had to play the cards we were dealt.”

Ray was usually the focus of opposing defenses, but still manage to put up huge numbers — evidence of his talent. The respect for Ray around the CIAA led to the Player of the Year award, which he called “a blessing.”

“Roger’s hard work put him in the position to win the CIAA Player of the Year, but I know he would have rather had a CIAA championship,” said Stinson. “That’s a tribute to what he’s done and people recognize his work. It’s been a pleasure to be able to coach him and to help him with not only basketball, but with life. I just wish we could have sent him out with a championship.”

A four-year player and three-year starter for Stinson, Ray now looks forward. He has real aspirations of playing professionally, whether it’s in the NBA or overseas.

Ray said that last summer, he attended the Mamba Sports Academy in California, which became even more known in January when its founder, Kobe Bryant, was killed in a helicopter crash, along with his daughter and seven others.

Ray said he plans to return to the academy soon for pre-NBA draft workouts.

“I’m entering the draft and I’ll be leaving soon for the academy,” he continued. “My dream is closer than ever. I’m just excited to start an NBA journey, to go work out for these teams and show them what I’ve got to offer.”

Ray offered that he already has enough credits to graduate in May, but plans to continue his current classes online. He said that it’s important to immediately start “this process of getting locked in on trying to play at the next level.”

Ray acknowledged, too, that his time at Kobe’s academy last year was eye-opening.

“They expanded my mind to the fact that I can play with these guys, who were at another level than I was,” said Ray. “It helped me understand that my dreams are actually sustainable. If I keep going, continue to work at the gifts that God gave me, I’ll be fine.

“First, it was like a dream, being out there,” continued Ray, “but when you get up close and personal, you say, ‘oh man, I can play with these dudes at a high level.'”

Ray attended Word of God School in Raleigh, before finishing in 2016, at Concord Prep, which he said “catapulted me into college basketball.”

Ray said he was recruited by several schools, both Division I and Division II. He accepted Stinson’s offer to Livingstone, as Fayetteville State, according to Ray, jumped in too late.

“LC was a good situation to show what I can do,” added Ray. “I played four years with no red-shirt — played straight out of the gate. I got playing time but didn’t start much. It was a ‘pay my dues’ situation. I had ups and downs, so I just had to make the best of it.”

Ray has majored in business entrepreneurship at Livingstone and whenever basketball does end for him, he’ll be ready.