No fans, now no players: PGA Tour shuts down for a month 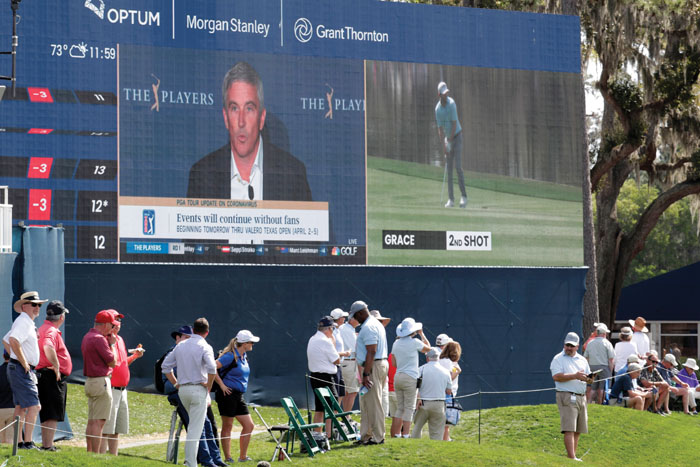 PGA Tour Commissioner Jay Monahan is broadcast on a score board on the 18th green, during the first round of The Players Championship golf tournament Thursday, March 12, 2020 in Ponte Vedra Beach, Fla. Monahan announced that the The Players Championship tournament will proceed without fans. The policy will be in place through the Valero Texas Open. (AP Photo/Lynne Sladky)

PONTE VEDRA BEACH, Fla. (AP) — The PGA Tour decided Thursday night to scrap the rest of The Players Championship and shut down its other tournaments for the next three weeks.

Commissioner Jay Monahan had said earlier Thursday there would be no fans at the TPC Sawgrass for the final three rounds, or at the next three tournaments on the PGA Tour schedule.

“We did everything possible to create a safe environment for our players in order to continue the event through the weekend,” the tour said in a statement. “But at his point — and as the situation continues to rapidly change — the right thing to do for our players and our fans is to pause.”

There was no immediately word whether The Players Championship would be rescheduled.

The Players Championship is the premier tournament run by the PGA Tour, offering a $15 million purse, the richest in golf history. It was to be followed by the Valspar Championship in the Tampa Bay area, the Dell Match Play in Austin, Texas, and the Valero Texas Open in San Antonio.

Earlier Thursday, even as other leagues were canceling tournaments and events for a month or more, Monahan leaned on golf not being a contact sport and being played outdoors across sprawling acreage as a reason not to shut down entirely.

“Our players are making their way over 400 acres,” Monahan said. “Because of the nature of that … and over the course of a round our players generally do socially distance themselves, we felt like by taking this step to address the problem with our fans, we’re in a position where we can continue to operate the events as of right now.

“We’re comfortable having our players continue to play at this time.”

One player was not.

C.T. Pan of Taiwan withdrew from The Players Championship, saying he wanted to  reduce the risk of exposure to the virus. Pan said on Twitter: “Our lifestyle is like a circus, traveling from one place to another. We believe this is a time to exercise caution by not playing this week.”

Fans were on the TPC Sawgrass on Thursday before the announcement and were allowed to stay as long as they wanted. Monahan said the policy was effective through the Valero Texas Open on April 2-5. That’s the final event before the Masters, which is operated by Augusta National Golf Club.

“At one point I was nearly expecting the horns to go off out there and for us all to be taken off the golf course,” Graeme McDowell said.

Augusta National said last week it was monitoring the spread of the new coronavirus. The club has a history of not making quick decisions, and no updates were expected until next week at the earliest.

Monahan said he spoke with President Donald Trump and Florida Gov. Ron DeSantis, and he said both supported the plan to proceed without a gallery.

The only other times the PGA Tour has kept fans off the golf course were for weather-related safety issues, when high wind toppled trees at Congressional in 2012 and at Torrey Pines in 2016. It was recently happened at the Zozo Championship in Japan because of flooding, keeping most fans away when Tiger Woods won his record-tying 82nd tournament.

Monahan said key personnel — vendors, media, volunteers and player support staff — would be allowed at Sawgrass. He also said the situation with COVID-19 was so fluid that plans to stage tournaments the next three weeks could change.

The PGA Tour is in Tampa Bay area next week for the Valspar Championship. After that is the Dell Match Play in Austin, Texas, and the Valero Texas Open in San Antonio.

The tour already announced the tournament in the Dominican Republic — two weeks from now opposite the same time as the World Golf Championships event in Austin, Texas — has been postponed because of travel issues.

The Players Championship is the premier event run by the PGA Tour, offering a record $15 million in prize money and attracting more than 200,000 fans through the week.

Monahan said continuing to play at a time when major sports were canceling events could serve as a “source of inspiration, especially if it’s done in a safe way.”

The tour announced late Wednesday that it was monitoring developments, and fans let onto the course for the first round were told that players would not be signing autographs. But then the NBA announced it was suspending its season, and college conferences began wiping out their basketball tournaments and other sporting events.

He said the tour had support from health and government officials that “we could continue confidently to stage this event with our players here at TPC Sawgrass.”

“And we feel at this point, looking into the weeks ahead, we’re in the same position,” he said.