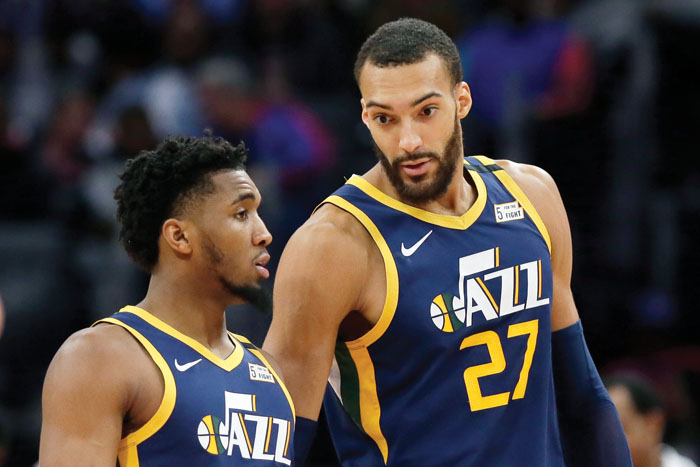 FILE - In this Saturday, March 7, 2020, file photo, Utah Jazz center Rudy Gobert (27) talks with guard Donovan Mitchell, left, during the second half of an NBA basketball game against the Detroit Pistons, in Detroit. Both players have tested positive for the coronavirus. Gobert's test result forced the NBA to suspend the season. (AP Photo/Duane Burleson, File)

MIAMI (AP) — NBA Commissioner Adam Silver said Thursday night that the league’s hiatus because of the coronavirus pandemic will likely last at least a month, or roughly what would have been the remainder of an uninterrupted regular season.

“What we determined today is that this hiatus will be, most likely, at least 30 days,” Silver said on TNT’s “Inside The NBA” while making his first public comments since the league suspended play Wednesday night after Utah Jazz center Rudy Gobert tested positive for the coronavirus, or COVID-19. A second Jazz player, Donovan Mitchell, said Thursday that he has also tested positive.

Silver did not say if the league intends for the regular season to resume or if the NBA, should it return to action, would immediately go into postseason play. It’s also unclear if play will be able to resume with fans in the stands, something the league’s owners were willing to go without prior to Gobert’s diagnosis and the escalation of the situation. The 30-day minimum hiatus would mean no games until at least April 10.

Silver said the league and the players association will have to continue determining “what makes sense here without compromising anyone’s safety and I think it’s frankly too early to tell,” Silver said.

The regular season was to go until April 15, with the playoffs scheduled to start on April 18 and the NBA Finals to begin June 4. The NBA’s 30-day plan was decided on the same day that Major League Soccer announced a 30-day shutdown  in response to the virus, that Major League Baseball said opening day would be delayed at least two weeks and the NHL began what it called a “pause” in its season.

“This literally changes hour-by-hour in terms of what we know,” Silver said.

Silver was also asked if the season may be over. “Of course it’s possible,” Silver said. “I just don’t know more at this point.”

Meanwhile, NBA great and longtime commentator Charles Barkley was not on the “Inside The NBA” broadcast Tuesday night and revealed that he is self-quarantining for 48 hours because he has not felt well since a recent trip to New York.

Barkley said he has been tested for COVID-19 and has not yet received the results. “This thing is so scary,” Barkley said.

For now, NBA players have been told to remain in their home market through at least Monday — some teams such as the Toronto Raptors that are self-quarantining would, in theory, need to remain place for longer — and speak to a team physician or team athletic trainer once daily. Group workouts and practices are not being permitted yet.

In most cases the new coronavirus causes only mild or moderate symptoms, such as fever and cough. For some, especially older adults and people with existing health problems, it can cause more severe illness, including pneumonia.

There are 259 games left unplayed on this season’s schedule. If the regular season is not resumed, that would be the second-largest number of games missed in league history.

Shutting down could cost the league hundreds of millions in revenue such as tickets sold, concessions and purchases of souvenirs and merchandise — adding to the financial concerns of a year where the league lost as much as $400 million, by its own estimate, after a rift last fall that started with a tweet by Houston Rockets general manager Daryl Morey in support of anti-government protesters in Hong Kong.

It also could cost players as well.

Donovan Mitchell of the Utah Jazz confirmed Thursday that he tested positive for the coronavirus, saying that he is personally dealing with the pandemic that has temporarily shut down the NBA and other major sports leagues.

Later, Jazz teammate Rudy Gobert — the first NBA player to test positive, which prompted the league to suspend the season — also confirmed his status and apologized. “I was careless and make no excuse,” Gobert said in an Instagram post.

Mitchell’s positive test was not known until early Thursday, the first full day of the NBA’s hiatus. Jazz players, staff and some beat writers covering the team were tested Wednesday night in Oklahoma City, where Utah was to play the Thunder in a game that was called off moments before tipoff once word about Gobert’s positive test was received.

Also Thursday, the Detroit Pistons, Boston Celtics, Washington Wizards and Toronto Raptors — teams that have all recently played against Gobert, Mitchell and the Jazz — all said that they were having some players and staff self-quarantine for as many as 14 days. The Cleveland Cavaliers, another team that has recently faced Utah, said they are not mandating quarantines yet but would if any of their players exhibit symptoms.

“Thanks to everyone who has been reaching out since hearing the news about my positive test,” Mitchell wrote in an Instagram post. “We are all learning more about the seriousness of this situation and hopefully people can continue to educate themselves and realize that they need to behave responsibly both for their own health and for the well being of those around them.”

Gobert was not among those behaving responsibly.

It started as a joke: Before leaving a media session at shootaround in Salt Lake City on Monday in advance of a game against Detroit, Gobert touched all the tape recorders that were placed before him on a table, devices that reporters who cover the Jazz were using.

“You know, there’s not much we can do right now,” Gobert said in that session when asked about how teams are dealing with the virus. And a minute or so later, before he ran out a side door, he touched all the recorders.

It isn’t so funny now — not with two Jazz players now having tested positive for the virus, and with a league on edge. It is not known if Gobert is responsible for Mitchell contracting the virus or vice versa.

“I have gone through so many emotions since learning of my diagnosis … mostly fear, anxiety, and embarrassment,” Gobert wrote. “The first and most important thing is I would like to publicly apologize to the people that I may have endangered. At the time, I had no idea I was even infected.”

For most people, the new coronavirus causes only mild or moderate symptoms, such as fever and cough. For some, especially older adults and people with existing health problems, it can cause more severe illness, including pneumonia.

The vast majority of people recover from the new virus. According to the WHO, people with mild illness recover in about two weeks, while those with more severe illness may take three to six weeks to recover.

His father, Donovan Mitchell Sr., is the New York Mets’ director of player relations and community engagement. Upon learning of the Jazz guard’s situation, the Mets’ medical staff recommended that Mitchell Sr. be tested “as a precautionary measure.”

“We are making those arrangements,” the Mets said.

Gobert became the center of why the  league has been shut down for the foreseeable future after he became the first positive test. Among the immediate fallout:

— Utah’s game against Oklahoma City Wednesday night was canceled and the season was suspended.

— Washington, which played Utah in late February, said Thursday that it was having its players, coaches and basketball operations personnel self-quarantine for the next three to four days. The Wizards played at Utah on Feb. 29.

— Washington also played Tuesday against the New York Knicks, another recent opponent of the Jazz. The Wizards said players, coaches and basketball operations staff who have flu-like symptoms will be tested for coronavirus.

— The Raptors also said Thursday they are self-quarantining. “Our players, coaches and traveling staff have all been advised to into self-isolation for 14 days,” the team said, also confirming that Toronto players had been tested.

— The Celtics said in a statement they have been constant communication with Massachusetts Department of Public Health officials. The Celtics played the Jazz on Friday. The Celtics believe it is unlikely that anyone from the team came into contact with Gobert or Mitchell while they were contagious.

But out of an abundance of caution the Celtics are having players and staff who were in close contact with Jazz players or who traveled to Milwaukee on Wednesday to self-quarantine through the weekend. Players and staff will then be tested for the virus.

— Gobert and Mitchell shared the court with 50 opposing players in those games, plus 15 referees. One of the refs was Courtney Kirkland, who was to work th e New Orleans-Sacramento game on Wednesday that got canceled  because he had been on the court for a Jazz game two nights earlier.

— Still unknown is how many ballboys, stat-crew employees, security guards, attendants and others were exposed by being around the Jazz or Gobert in recent days. Some Jazz reporters said they were getting tested for COVID-19.

“I’m sure I probably had contact with him,” Detroit’s Langston Galloway said.

The NBA shutdown could cost teams well into the hundreds of millions of dollars depending on how long it lasts. Those teams that have faced Gobert in recent days will likely face some testing.

State health labs and many commercial labs can conduct tests on mouth swabs, and health officials estimate that the system could handle about 20,000 tests per day.

“I will do whatever I can to support using my experience as way to educate others and prevent the spread of this virus,” Gobert wrote. “I am under great care and will fully recover. Thank you again for all your support. I encourage everyone to take all of the steps to stay safe and healthy.”

The Jazz said Thursday that the team practice facility and Vivint Smart Home Arena — where the team plays games and other concerts and events take place — are being cleaned and sanitized. It remains unclear when the Jazz will use either of those facilities again.

No fans, now no players: PGA Tour shuts down…