Local college sports shut down for rest of school year 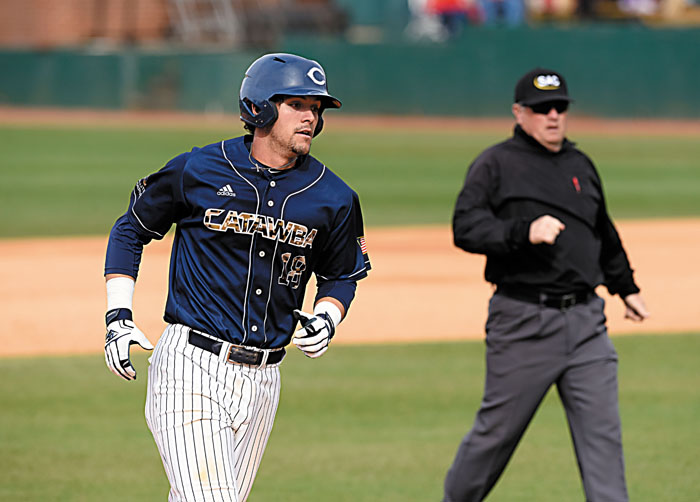 Wayne Hinshaw filephoto/for the Salisbury Post ... Catawba’s Hunter Shepherd, a senior from Salisbury, was off to a great start for the Indians this spring. Now, unfortunately, the season is over.

SALISBURY—  On Wednesday night, Catawba head men’s basketball coach Rob Perron was excited about making it back to the NCAA Division II playoffs and was preparing for Thursday’s long trip to the Southeast Regional hosted by Lincoln Memorial in Harrogate, Tenn.

His team was set to practice in Knoxville on Friday and would take on UNC Pembroke in the noon Saturday game that would kick off the regional.

On Wednesday night, Perron already knew it wouldn’t be business as usual because of growing COVID-19 concerns and strict spectator limitations. Catawba’s 20-person traveling crew had been allotted six tickets each, so there would be be a maximum of 120 Catawba supporters in attendance. UNC Pembroke was in the same boat. The Braves also would have a max of 120 fans.

But basketball is basketball, even in a mostly empty arena, and the Indians, talented 20-game winners who have flown under the radar as the third team in a conference with two super-powers (Lincoln Memorial and Queens) were ready. They’d already played five of their seven potential opponents in the regional (Lincoln Memorial, Queens, UNC Pembroke, Southern Wesleyan and Augusta) that was to be played on Saturday, Sunday and Tuesday, with the survivor moving on to the Elite Eight.

UNC Pembroke had one of the nation’s best rebounding teams and had edged Catawba in overtime in November, but the Indians, led by senior  stars Devin Cooper and Marcell Haskett, were well-prepared for the Braves. Tough guy Daquan Lilly was healthy again and ready to start, so Ben Zemonek could come off the bench. High-flying defender Larry McLeod was ready to shut down somebody. Malik Constantine was ready to go out with a bang.

Terrence Whitfield was coming off a 31-point explosion in the South Atlantic Conference Tournament loss to Queens. Perron didn’t know if that performance was an anomaly or a genuine breakout, but he was looking forward to finding out. Whitfield is a dangerous guy when he’s aggressive, and he was starting to figure it all out.

“We’ve been up and down all season, two seven-game winning streaks, but also a four-game losing streak and a three-game losing streak,” Perron said. “But it’s time for this program to take that next step, time to climb to the mountain top. We’re really talented , talented enough to jump over that highest hurdle, that hardest hurdle.”

Perron had UNC Pembroke in front of him, but he still didn’t mind talking about potential regional ematches with Queens and Lincoln Memorial. Catawba had scored 95 against Queens, even with Haskett shooting 2-for-10. Catawba had put up 85 and 88 against a Lincoln Memorial team that holds most squads in the 60s.

“I believe our guys are ready to rise to the challenge,” Perron said.

Those were his final words on Wednesday.

But opportunity didn’t happen. The regionals, the Elite Eight, the championships were all casualties of the escalating COVID-19 threat on Thursday afternoon. The regionals were canceled.

NCAA President Mark Emmert issued the following statement: “This decision is based on the evolving COVID-19 public health threat, our ability to ensure the events do not contribute to spread of the pandemic, and the impracticality of hosting such events at any time during this academic year given ongoing decisions by other entities.”

The South Atlantic Conference made the decision to cancel all spring athletics competition and practice for the remainder of the 2019-20 academic year.

“This is uncharted territory and we are looking out for the health and safety of our student-athletes, coaches, administrators and staff,” SAC Commissioner Patrick Britz said. “I want to thank the presidents and athletic directors of the SAC for helping us make a swift and difficult decision that none of us wanted to make, but it is in the best interest of everyone as a whole.”

That was crushing news to Catawba’s spring-sport athletes.

Coach Jim Gantt’s baseball team was off to a 19-3 start and was ranked second nationally in one major poll and fourth in the other. The announcement ended the college careers of  hard-hitting seniors such as Hunter Shepherd, Jackson Raper, Jeremy Simpson, Lee Poteat and Cameron Morrison, all of whom were off to fantastic starts. Shepherd (9 homers, 26 RBIs, .447 and 3-0 on the mound) and Raper (9-35-.436) were playing at an All-America level. Senior pitcher Bryan Ketchie already had four wins.

“It’s a really bad day,” Gantt said. “We knew once March Madness was called off that this probably was coming, but it’s still hard to believe. I’m not mad, I’m just in a state of shock right now. I feel terrible for our players. I wish they’d postponed instead of canceled. I wish there was still some possibility of resuming the season, but now it’s over. One NBA player infected, and it just snowballed from there. It all happened so fast. Hopefully we’ll have an American Legion baseball season this summer.”

The news was no less crushing to the players, especially the seniors, on Catawba’s other teams.

Earlier in the week, some Catawba fans were making plans to watch both the softball and men’s basketball teams play this weekend at Lincoln Memorial, but softball careers ended on Thursday for a half-dozen seniors, including Taylor Martin (West Rowan) and Kaylee Cook (A.L. Brown), who starred at local high schools. They won their last games — a doubleheader sweep at Limestone on Sunday.

“This is just devastating,” said Clai Martin, who is Taylor Martin’s father. “Right now, there’s a lot of tears.”

Catawba’s fledgling beach volleyball program had been scheduled to make its home debut on Friday, but that won’t happen.

Also shuttered for the remainder of Catawba’s school year are track and field, golf, tennis and lacrosse programs.

As for Livingstone, the CIAA has shut down athletics for the spring, starting with the conference bowling tournament. Track and field, golf, tennis and softball are also affected.

The Davidson County Community College Storm basketball team, led by Carson graduate Jamarius Hairston, the region player of the year, hasn’t given up on playing in the national D-II junior college tournament in Illinois. As of Thursday night, that event had been postponed — not canceled. They hope to get that tourney started on April 20.