Burlington donates $10,000 to Koontz Elementary ahead of new location opening around the corner 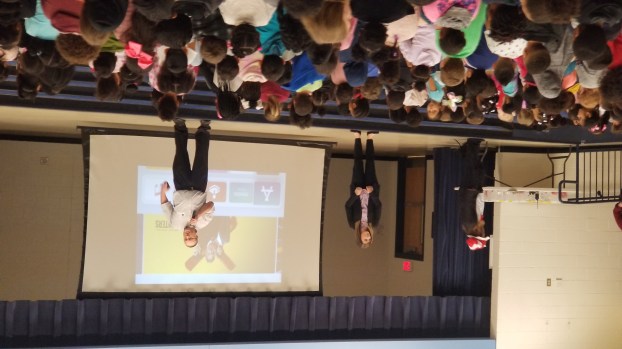 SALISBURY – Students and faculty at Koontz Elementary School were not told why they were gathering in the school’s auditorium on Tuesday morning.

Koontz Principal Nicole Buckner stood up to introduce local Burlington manager Chris Berry, who revealed a $10,000 contribution from department store retailer Burlington to be divided up between teachers to use in their classrooms.

The students yelled with enthusiasm throughout the assembly. Berry is the manager at a new location opening later this month, just around the corner.

Sponsoring local schools is only one of Burlington’s charitable efforts. The retailer used to be called Burlington Coat Factory, and still has coat drives, toy drives, supports the Leukemia and Lymphoma Society and disaster relief.

This check from Burlington will go directly to classrooms, giving teachers the ability to purchase supplies or instructional items that they would pay for out of pocket or not be able to purchase otherwise.

“Do you know how hard your teachers work?” Berry asked the students. “How about a round of applause for your teachers?”

Berry said when he was in school he never knew the time and dedication teachers put into his education. The students were worked up into a “Burlington!” chant.

Salisbury High School’s cheerleaders came out to perform for the crowd as well, performing some education-themed cheers with lines like “read your books.”

Buckner found out the school would receive the donation about a month ago, and the money goes straight to the teachers and the students in the classroom.

“It’s for the students, it’s for whatever the teachers want to invest in their children, in their classroom,” Buckner said.

Fourth Grade Teacher Jamie-Lee Biggs said she will use the money to get a book for each child.

“Being able to hold a book and really enjoy it, not just at school but to take it home,” Biggs said.

Biggs said she thinks something as small as giving kids a book has a big impact on their education.

“We’re in a society where things are at a point where they have instant rewards,” Biggs said. “And we have to teach them how to work through the processes of life, and reading is one of those steps. Instead of watching video that is an instant reward, reading it, engaging it, having critical thinking skills develop, going on a journey, predicting, being in suspense, creating a sense of eagerness is something that is really vital to their education.”

Berry said it is typical for the company to donate to local schools and this was his first time getting to make a check presentation like this.

“It’s pretty awesome,” Berry said. “Not only that, it’s awesome to see the engagement that the students have with the teachers. You can tell that they do a fantastic job here.”

Berry described Burlington as the best company there is to work for and he is surrounded by great people.