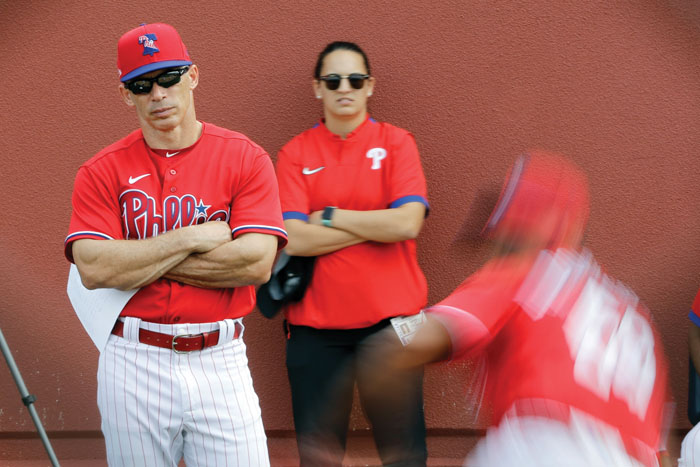 CLEARWATER, Fla. (AP) — It’s clear when Joe Girardi walks into a room that he’s the man in charge.

There’s a different vibe surrounding the Philadelphia Phillies in spring training thanks to their new manager with the impressive resume. Girardi commands respect without having to demand it. He has a confident swagger that resonates with players because he’s won four World Series as a player and manager.

“He has a really calm, confident demeanor,” All-Star catcher J.T. Realmuto said. “When he speaks, everybody listens because he’s so intelligent and what he says makes sense all the time.”

“He understands what it’s like to be a player each day,” slugger Bryce Harper said. “He’s won World Series as a player and manager. Anyone that can solidify themselves for nine years in New York has my respect.”

He’s a great manager. He understands the grind each day. He’s business-like every day but he also has a fun side to him, too. I’m excited about what we have.”

Girardi had a .267 batting average and 1,100 hits with a .991 career fielding percentage as a catcher in 15 seasons in the majors. He won three World Series titles playing with the Yankees and was an All-Star with the Cubs in 2000.

“It gives me a lot of confidence in him knowing he’s been there, he’s been behind the plate in World Series games, he’s done it as a manager as well,” Realmuto said. “He’s got that brain that not many guys have. You can’t get that experience without actually being behind the plate. He’s somebody I can always go to and pick his brain and that will help a lot.”

Girardi replaced Gabe Kapler, who was fired after two seasons. The Phillies were 81-81 last season despite significant additions, including Harper and Realmuto. Injuries depleted the roster, especially the pitching staff. Kapler moved on to the San Francisco Giants and Girardi is here. Expectations are high again this year, even in a tough NL East.

“I really like our team a lot,” Girardi said. “I know we’re going to have good days and bad days. But the bad days are teaching tools.”

Girardi already had a fan in new Phillies shortstop Didi Gregorius, who signed a $14 million, one-year deal after spending the past five seasons with the Yankees.

“It’s fun playing for Joe,” Gregorius said. “He always fights for his players, always wants his players to be successful.”

After Gregorius got his first spring training hit following an 0-for-22 start, Girardi playfully handed him the baseball.

“He’s one of the reasons I signed here,” said pitcher Zack Wheeler, who got a $118 million, five-year deal after pitching for the Mets since his debut in 2013. “I heard nothing but good things about Joe. His resume backs up his personality.”

The Phillies started strong each of the past two seasons under Kapler but collapsed in September. In 2018, they had a one-game lead in the division on Aug. 11 before going 15-31 the rest of the way. Last year, they were only two games behind in the wild-card standings on Sept. 18 but lost eight of the next nine and finished eight games behind Milwaukee for the second wild card and 16 behind the first-place Braves in the NL East.

“We know what Joe has accomplished,” ace Aaron Nola said. “To have that around a team like ours is pretty important.”