March Sadness — No fans will be allowed at NCAA tournaments 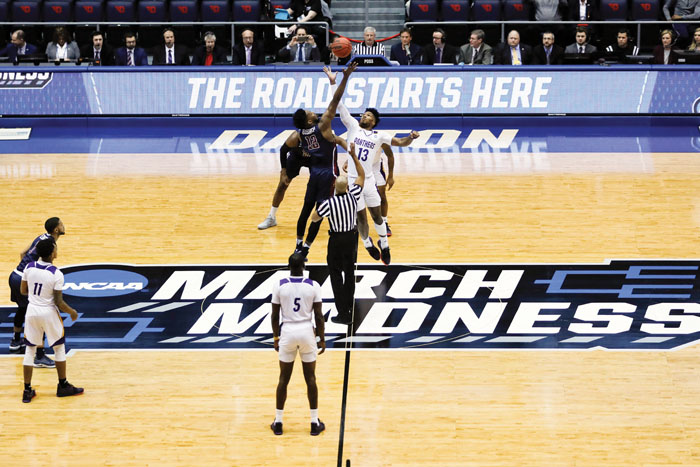 FILE - In this March 19, 2019, file photo, Fairleigh Dickinson's Kaleb Bishop (12) and Prairie View A&M's Iwin Ellis (13) leap for the opening tip-off in the first half of a First Four game of the NCAA college basketball tournament in Dayton, Ohio. NCAA President Mark Emmert says NCAA Division I basketball tournament games will be played without fans in the arenas because of concerns about the spread of coronavirus. (AP Photo/John Minchillo, File)

The buzzer-beaters, upsets and all the other shining moments of this year’s NCAA tournaments will be played in mostly empty arenas.

Trying to avoid spreading the new coronavirus that has become a global pandemic, the NCAA decided the men’s and women’s tournament games will be off-limits to the general public.

NCAA President Mark Emmert said Wednesday that he made the decision to conduct both tournaments, which begin next week, with only essential staff and limited family in attendance. The decision comes after the NCAA’s COVID-19 advisory panel of medical experts recommended against playing sporting events open to the general public.

Emmert told The Associated Press that canceling the tournament was considered.

“The decision was based on a combination of the information provided by national and state officials, by the advisory team that we put together of medical experts from across the country, and looking at what was going to be in the best interest of our student-athletes, of course,” Emmert told the AP in an phone interview. “But also the public health implications of all of this. We recognize our tournaments bring people from all around the country together. They’re not just regional events. They’re big national events. It’s a very, very hard decision for all the obvious reasons.”

Emmert said the NCAA wants to move the men’s Final Four on April 4 and 6 from Atlanta’s Mercedes-Benz Stadium to a smaller arena in the area. The NCAA also will consider using smaller venues for second-week regional sites currently set to be played at the Toyota Center in Houston, Madison Square Garden in New York, Staples Center in Los Angeles and Lucas Oil Stadium in Indianapolis.

“We have to determine the availability of the sites, obviously, but it doesn’t make good sense to have a football stadium be empty,” Emmert said.

All sites for next week’s men’s games will remain the same unless conditions in those areas force relocation, he said.

Plans for refunding tickets purchased in advance were being worked out.

First- and second-round sites for the women’s tournament will become official next week. Those games are usually played at or near the campuses of the highly seeded teams.

“It’s really sad. Obviously it’s disappointing for all our fans,” said Louisville women’s coach Jeff Walz, whose team is ranked No. 6 in the latest AP poll. “At the same time I completely understand for the health and safety of the fans and student-athletes and everyone involved.”

Walz said the university already had sold more than 4,000 tickets for the first- and second-round sessions.

The decision applies to more than just men’s and women’s basketball. All NCAA-sponsored championships including hockey’s Frozen Four will be affected.

But the men’s basketball tournament is the crown jewel, one of the most popular events on the American sports calendar. March Madness draws hundreds of thousands of fans to arenas from coast to coast. The men’s tournament generated more than $900 million in revenue last year for the NCAA and its members, though the majority of that was from a media rights deal with CBS and Turner that pays about $800 billion per year.

“We’re like any enterprise of this size, we have business interruption insurance, and a variety of other things but we’ll sort that out in due course,” Emmert said.

Emmert said CBS and Turner plan to broadcast the games us usual. Other media members will be allowed into the arenas to cover the games, but how many is still being determined, he said.

Emmert said a protocol for the medical screening of people entering the arenas is still being worked out, too, along with what constitutes essential staff (bands? cheerleaders?) and how to define family members.

For most people, the new coronavirus causes only mild or moderate symptoms, such as fever and cough. For some, especially older adults and people with existing health problems, it can cause more severe illness, including pneumonia. The vast majority of people recover from the virus.

Around the country, many colleges and universities in recent days have been shifting to virtual classes and telling students to extend their spring breaks, encouraging them to stay away from campus.

“A number of schools, including schools that their president are on our board, have indeed closed down campuses and made other accommodations and so it was part of the discussions,” Emmert said. “And people recognizing they were making those decisions for good reasons, and doesn’t that logic continue over to athletic competitions?”

The 68-team field for the men’s basketball tournament is scheduled to be announced Sunday and the 64-team women’s tournament field is to be unveiled Monday. Games begin Tuesday and Wednesday on the men’s side in Dayton, Ohio, where earlier in the day the governor said he would issue an order to restrict spectator access to indoor sporting events.

The Mid-American Conference on Tuesday announced it was closing its men’s and women’s basketball tournament games at Cleveland’s Rocket Mortgage FieldHouse, home of the NBA’s Cleveland Cavaliers and scheduled site of the men’s NCAA games, to the general public. The women’s tournament started Wednesday.

The Big West Conference announced a similar move, not allowing the general public into its basketball tournament games to be played this week at the Honda Center in Anaheim, California.

Emmert said it would be up to conference officials and their members to decide how they wanted to proceed with their tournaments for the rest of the week. One by one the power conferences playing in large venues followed the NCAA’s lead.

The Atlantic Coast Conference, Big Ten and Big 12 announced they would not allow the general public to attend their men’s basketball tournaments for the rest of the week. All started Wednesday with fans in attendance. The Big Ten is playing at Bankers Life Fieldhouse in Indianapolis and when an announcement was made about limiting fan access going forward, fans booed.

The Big 12 men are playing at the Sprint Center in downtown Kansas City, Missouri.

Commissioner Bob Bowlsby said teams will be allowed 125 tickets on a game-by-game basis beginning with Thursday’s quarterfinals. The arena will be cleared after each game. The tickets will go to guests of student-athletes and staff members but pep bands, cheerleaders and dance teams will not be allowed. The policy also will be in place for the women’s Big 12 Tournament, which begins Thursday night a few blocks away.

“One of the things we’ve heard is that it’s going to get much, much worse,” Bowlsby said. “The advice is don’t gather in large crowds.”

The Atlantic Coast Conference was in Day 2 of its five-day men’s tournament in Greensboro, North Carolina.

The Pac-12 played the first games of its tournament in Las Vegas on Wednesday and the Southeastern Conference tournament started in Nahsville, Tennessee. The Big East began play Wednesday night at Madison Square Garden in New York.

There were no immediate plans to limit access to those tournaments.

March Madness hits another level next week with the start of the NCAA Tournament to crown a national champion.

There are eight first- and second-round sites for the men’s tournament, scheduled to be played March 19-22. Locations include Cleveland; Spokane, Washington; Albany, New York; Sacramento, California; and Omaha, Nebraska.

The women’s tournament first- and second-round games begin March 21 and will be played at 16 sites. The second-week regionals will be played in Dallas, Greenville, South Carolina; Portland, Oregon; and Fort Wayne, Indiana. The Final Four will be held at the Smoothie King Center in New Orleans where the NBA’s Pelicans play on April 3 and 5.

Emmert said the games will go on, but cautioned that nothing is set in stone due to the outbreak.

“This will be a continuing story,” he said.