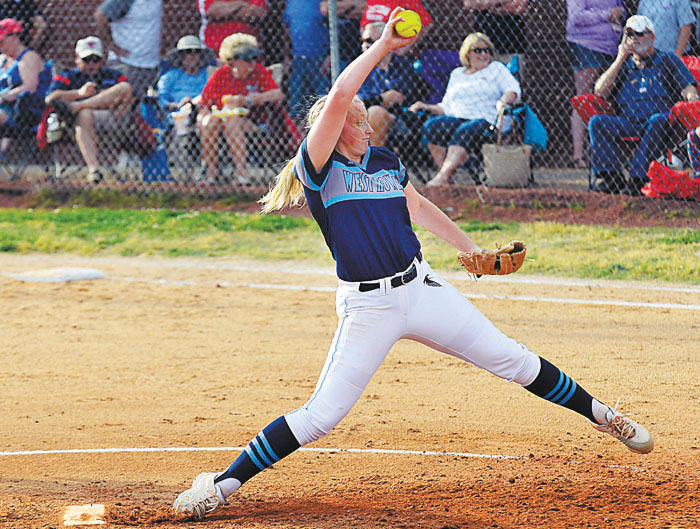 Wayne Hinshaw file photo/for the Salisbury Post ... West Rowan’s Whitley Arnott returns for her senior season in the circle. Arnott was Rowan County Pitcher of the Year in 2019 and has already signed with Catawba.

Playoffs: Lost 1-0 in eight innings to Parkwood, 3A third round

One twisted knee or one dislocated right elbow, and West’s softball season would have been drastically impacted, but Greene is smiling now. Arnott got through 26 basketball games in one piece.

“I almost had a heart attack watching her because Whitley plays basketball like it’s football,” Greene said with a laugh. “But I learned years ago watching my softball girls play basketball that you can’t do anything about it. You just let it happen and hope for the best.”

Arnott, who has signed with Catawba, is the most coveted commodity in softball — a dominant pitcher. She fired a no-hitter with 14 strikeouts and one walk in the Falcons’ 2020 opener. Arnott gives West a chance to win every time it plays, no matter who is providing the opposition.

The 6-foot-1 Arnott averaged almost 12 strikeouts per seven innings in 2019, so she and the catcher can take care of the equivalent of four innings every ballgame. That’s an enormous advantage for the Falcons. That means they only have to make about nine fielding plays a game, while most of their opponents are going to have to make 15 or more.

Arnott (20-4) was the county’s pitcher of the year as a junior and already owns more than 500 career strikeouts.

“She’s strong-willed, she’s got power and she’s got different pitches,” Greene said. “She does give us an advantage on most teams and she gives us a chance to be good. The only bad thing is that when she gets rolling, it’s easy for your defense to fall asleep and get back on their heels watching her.  She gets mad when someone gets a hit.”

If everyone had a clean bill of health, West Rowan might be scary.

But everyone isn’t. While Arnott is feeling good, Kaylin “KK” Dowling (knee) and Allison Ennis (foot), two very strong players, were on the shelf as West’s season got under way.

“That hurts our offense and our defense because those two are studs,”Greene said. “Right now, we’ve got girls hopping all over the infield and outfield replacing them. We always figure out our defense first and then worry about our offense later, but we’re still in the figuring-out process with our defense. It might take us a few weeks.”

Dowling and Ennis are expected to return during the season. Dowling was one of the county’s best players last season, a sensational outfielder and an excellent hitter for average and power. Ennis is more of a glue person than a huge stats person, but she’s equally important.

“We’re going to miss Mary Sobataka (now a freshman at Coastal Carolina), not so much for the homers and the plays she made at shortstop, but because everyone  got along with her,” Greene said. “We were expecting KK and Allison to be this year’s version of Mary. They’re outstanding team-chemistry people. They’re going to be great cheerleaders in the dugout until they’re healthy, but we really need them back on the field.”

Megyn Spicer did an amazing job catching Arnott last season, but freshman Brooke Kennerly is expected to handle most of the catching duties this time. Kennerly is not a typical freshman. She played in some big-time volleyball playoff matches back in the fall, so any jitters about varsity competition are well behind her.

Taylor Walton gives the Falcons a big left-handed bat at first base. She’s verbally committed to Quinnipiac, a D-I program in Connecticut. Walton, the county player of the year as a sophomore, batted over .500 with five homers and got on base 61 percent of the time. She’s also exceptional with the glove at first base and will back up Arnott as West’s second pitcher. She’s an experienced lefty option in the circle.

Kenadi Sproul will handle second base, an extremely important part of West’s defensive game planning. Most batters are right-handed,. With Arnott pitching ,they’re going to swing late and hit more ground balls are hit to the right side than to the left side. Arnott also is hard enough to hit that more batters will try to bunt against her than they would against an average pitcher. Sproul will be covering first base a lot. When Ennis does return, Sproul might change positions, but can also play the outfield.

Offensively, Sproul’s batting average was a modest .293 last season, but she has elite speed and scored a whopping 35 runs out of the leadoff spot. If she gets on, she’s probably going to score.

“She can cover some ground at second base and she gets our offensive started,” Greene said.

The plan is for Spicer to play shortstop.

“She’ll do anything you ask,” Greene said. “She’s a good hitter and a smart defensive player.”

New third baseman Reagan Haggas  (.341, 24 RBIs) has played other positions in the past, but she gives the Falcons experience and another power bat. She homered in the Falcons’ first game of the season.

Dowling figures to anchor West’s outfield defense after she returns.

The most likely outfield minus Dowling is Caylie Keller in right, Taylor Poole in center, and Hannah Noblitt, a transfer from A.L. Brown, in left.

West has talented freshmen that might get a chance to shine for the varsity this season. That group includes Allison Ennis’ sister, Ashlee, Madelyn VonCanon and Karsen Simpson.

As is the case with all teams that have some good players, who have started their whole lives, on the bench, West’s chemistry will be tested, but Greene has plenty of experience. He’s seen a lot and learned a lot and he’s coached four conference champs in his six seasons.

“Coaching girls, you’re a coach maybe 35 percent of the time and a guidance counselor 65 percent of the time,” Greene said. “You’re always one boyfriend or one comment away from a problem. But I really like this team.  I think it’s going to be a fun year for everyone.”

West’s chemistry was good enough last season to finally get past the second round of the playoffs. The Falcons hadn’t done that since 2005 when they had Maryland signee Devon Williams and finished as 3A state runner-up.

West has serious goals and has put together a challenging non-conference schedule.