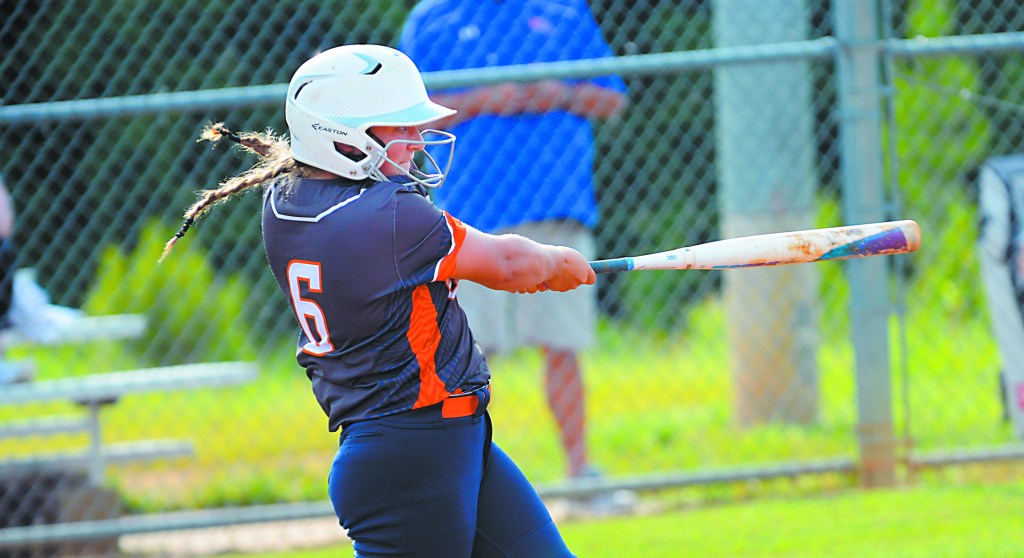 Wayne Hinshaw/for the Salisbury Post ... Kary Hales is a key returning player for Carson’s softball team this season, and makes the move to shortstop.

Playoffs: Lost to North Buncombe, 3A third round

CHINA GROVE — Carson’s lineup should be as good as anyone’s — the Cougars can hit and field — but about 75 percent of softball is pitching.

Carson always plays West Rowan tough. The Cougars beat the Falcons on Senior Night last season and lost to them by one run in Mount Ulla. But West has senior pitcher Whitley Arnott, one of the best in the state, so the Falcons are the favorite in the North Piedmont Conference. Right now, Carson, even with a host of starters back from a team that finished one game back of West in the NPC race and reached the third round of the 3A state playoffs, is just a contender.

“The circle is the question for us,” Carson head coach Charissa Duncan said. “If we can figure the pitching out, if someone steps up big for us there, we’ll have a really strong team.”

It’s not like Carson doesn’t have candidates. There are four potential hurlers, all of whom might be very good.

Senior Madison Anderson was the No. 2 pitcher a year ago and has experience. She fractured a thumb while batting in a scrimmage, so she’s not 100 percent yet.

Junior Kary Hales is the starting shortstop, and Duncan wants to keep her at shortstop for her glove, but she can be an effective pitcher if needed.

The other two pitchers are freshmen Lonna Addison and Phoebe Cole.

Addison pitched a shutout against Robinson on Monday. She walked five, but she only allowed two hits.

“That was really encouraging to see her pitch seven innings,” Duncan said. “She’s been getting a lot of the work so far.”

Carson has two good catchers. Skyler Smith is experienced. The senior was a sophomore starter behind the plate when Carson made a sudden run to the 2018 regional championship series. She’s had a major surgery since then , so she may back up strong-armed Makayla Johnson, who played mostly on the jayvees last season.

Carson has so many bats that it should keep on hitting, even after losing sticks such as Katie Jewell and Kaitlyn Honeycutt.

Carson has outstanding hitters at first base and shortstop. Hales is coming off a season in which she batted .432 with six homers and 11 doubles. First baseman Liza Simmerson hit .436 last season. On Monday, Hales swatted a two-run homer, while Simmerson hit a grand slam.

Ellie Wilhelm, who hit .360 last season, suffered a concussion in the basketball playoffs, and isn’t on the softball field yet. Wilhelm has been mostly a second baseman, but she also can play shortstop and outfield, so she’ll give Duncan a lot of lineup options once she’s healthy.

Sophomores Abbey Nixon (second base) and Allie Burns (third base) have been the other infield starters early in the season. They got a lot of varsity at-bats as freshmen.

Carson also has a surplus of good players in the outfield.

Senior Maci Cooper returns in center field. She was a .333-hitter and an exciting fielder with a lot of speed. She goes after everything and doesn’t want anything to hit the grass.

Landry Stewart, a freshman left fielder, is the younger sister of former Carson pitcher Riley Stewart, who got red-hot in the circle and keyed Carson’s playoff run in 2018. Landry has taken over the leadoff spot for the Cougars and has been scoring runs.

“She’s fast and she gets after it,” Duncan said.

In right field, Duncan has two good options. Tate Barger hit .388 last year, but Sierra Ratliff, who also played a lot last season, is likely to share time with her.

When people who hit .388 aren’t sure starters, that’s a lot of offense. It’s no wonder Carson has batted .398 as a team while winning three of its first four games.

Sophomore Lilli Heard and freshman Holly Stowe are talented enough that they made the varsity roster. They’ll try to work their way into the lineup.

Shane Stewart, Landry’s father, and former West Rowan and Western Carolina slugger Hunter Gibbons will assist Duncan. Also on board are Riley Stewart and Haley Howerton, who also was part of the 2018 run. They’ll be working mostly with the jayvees.

Carson will be good,. If things work out in the circle, the Cougars may be better than good. They could play for a while this spring.

“I think we’ve got chemistry and character, as well as good players,” Duncan said. “We’re excited about the season.”