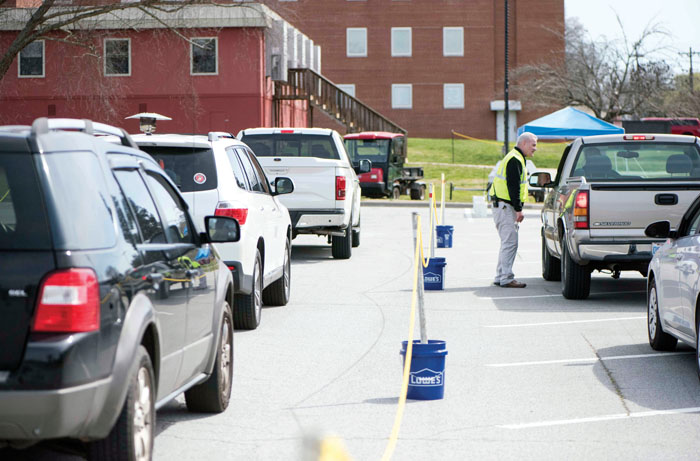 Salisbury Post file photo - VA Employee Tim Draper (right) asks questions to those needing to get on the VA campus in March after the facility began asking screening questions for COVID-19.

SALISBURY — The Salisbury VA Health Care System on Monday began screening all visitors who arrived on its properties for COVID-19.

The federal government last week mandated all VA centers to screen visitors before they enter the property, Vaughn said. To prepare, the Salisbury VA posted about the screening on social media and notified media and patients via text message and via appointment card reminders in the mail. Additionally, Vaughn said, the nurse call center has been encouraging patients to schedule appointments through video if possible to alleviate the increased traffic.

Veterans and staff have been instructed to enter and exit at the Hedrick entrance from Brenner Avenue. The city of Salisbury issued an advisory on Friday stating that people who usually travel on Brenner Avenue should expect “major delays.”

So far, no one at the Salisbury VA has been confirmed to have COVID-19, according to Vaughn. Last week, one patient had a cough and had recently visited South Korea, which is one of the countries with active cases of COVID-19, but ultimately was “fine.”

On March 3, the North Carolina Department of Health and Human Services announced it had the capability to test for COVID-19 throughout the state. So far, there have been seven cases identified in the state, six in Wake County and one in Chatham County.

Five of the seven were announced Monday night. The five had traveled to a February conference in Boston.

The Indiana State Department of Health also notified North Carolina officials that a person who tested positive for COVID-19 on Sunday was in Durham and Wake counties March 2 through Friday while symptomatic. The person is in isolation at home in Indiana.

The coronavirus is a family of viruses that can affect humans and animals. Symptoms mimic a common cold — including fever, cough and trouble breathing — that can lead to diseases such as SARS (severe acute respiratory syndrome), MERS (Middle East respiratory syndrome) or the recent COVID-19 that was discovered in Wuhan, China, in late 2019. COVID-19 is the name of the disease caused by the new virus.

The screening questions at the Salisbury VA ask visitors if they are experiencing a fever or any other symptoms of a cold or the flu, if they have recently travelled internationally within the last 14 days to an area that had been infected or if visitors have been exposed to anyone who had been infected with the coronavirus. If visitors answer “no” to those questions, they are given a pass to display on their dashboards.

If visitors answer “yes” to any of the questions, they are then triaged to a nurse at a mobile clinic. If visitors have heart or lung problems and display coronavirus symptoms, they may receive a mask, be put in an isolation room and receive emergency medical care. Any of those cases are then reported to the health department, Vaughn said. Visitors with minor symptoms are directed to self-quarantine for 14 days.

Kannapolis resident and Air Force veteran Steve Dagenhart, 70, said he found out about the screening by accident when he arrived to campus for his 10 a.m. appointment. He suggested the use of more signs on campus to alleviate confusion.

Vaughn acknowledged there was a “first-day learning curve” and said the VA Center intends to improve its signage across campus.

“We’ll do what we can to make the process better,” Vaughn said.

Dagenhart added that he stays updated on the coronavirus spread in the news, but he’s the type of person to call a health professional or his daughter, who’s a nurse, to get more information. Though people are concerned and on edge, Dagenhart said people “need to be careful about what they say — (only) what (they) 100% know.”

Ricky Murdock, 66, is an Army veteran who also didn’t know about the screening until he arrived on campus. Murdock said he was “suspicious” when the gate was up. All he knew is that COVID-19 is similar to the flu, but he was concerned Monday because it’s become “global.”

“In my lifetime, this is something that’s new,” he said.

He added that the government seemed to be on top of the Ebola outbreak in 2014, but this seems more serious now since people are dying. More problems manifest when people panic, such as a crash in the economy, he said.

Holly Blais, a 45-year-old Air Force veteran, said the screening process was easy and that she was notified by phone ahead of time. Additionally, Blais said she isn’t as concerned because she’s in good health.

“I’m more fearful my flight to Ireland is going to get canceled,” she said.

Her daughter goes to college there, she added.

The Ebola outbreak was scarier, she said.

Monday’s visit was also Blais’ first visit to the VA, as she moved to Salisbury in January from Minnesota.

All three veterans said they felt that the federal government is doing the best that it can. But Murdock added that people should get together, despite it being an election year, and perhaps even go to the United Nations to find a solution.

The VA will continue to screen all visitors until further notice, Vaughn said. Since it is still a national concern, he doesn’t expect to stop the screening anytime soon.

Veterans and staff are being encouraged to take preventative actions to avoid being exposed to the virus:

For more information about the coronavirus, visit: cdc.gov/coronavirus/2019-ncov/index.html.