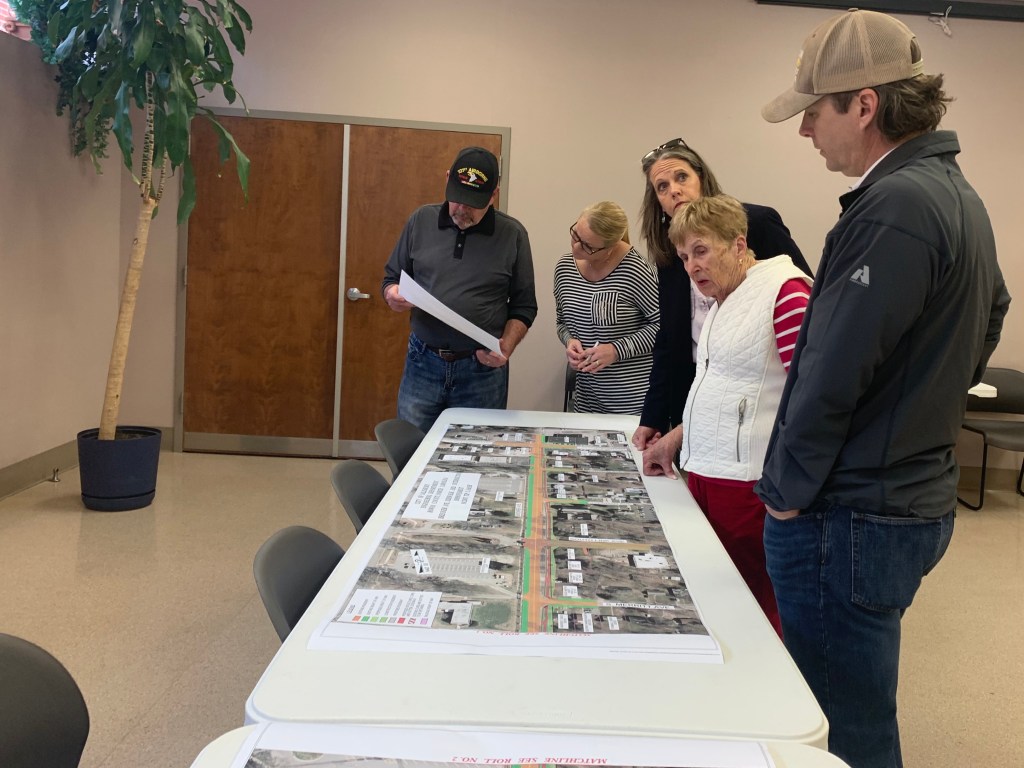 Gray and Kay Wilson ask questions about the Brenner Avenue sidewalk improvement project's potential affects on their rental property business. The two were in favor of the sidewalks to go along the stretch of Brenner Avenue.

SALISBURY — Sidewalks on a portion of Brenner Avenue where there are none are currently in the design stage. On Monday night, the city engineering department got resident input on the project at the West End Business Center.

The sidewalks will span on the east side of Brenner Avenue, from W. Horah Street to Statesville Boulevard. The project will also add a left turn lane at the intersection of S. Link and Brenner avenues into the VA hospital. The project is expected to cost about $700,000 will be funded federally through the federal DOT program Congestion Mitigation and Air Quality Improvement. The start date of the project is unknown due to a budget shortage at the N.C. Department of Transportation.

“We have a sidewalk priority list, and as we completed projects, we go to the next one based on usage and need,” said City Engineer Wendy Brindle.

Brindle said the city is looking for feedback from people that will be affected and the city in general.

Kay and Gray Wilson own a rental property at the intersection of Fairson and Brenner avenues. The mother and son said they were looking to see how the sidewalk and intersection improvements would affect their rental business, EnKay Properties. They asked about the mailboxes and whether there would be a grass strip between the sidewalk and Brenner Avenue, mentioning concerns about the type of grass that would be used. Kay Wilson also told the engineers the property had an irrigation system.

The Wilsons spoke about people who walked in the street, especially people exiting the VA hospital in motorized wheelchairs. The pair said they were thankful to the city for allowing them to ask questions and give their input.

“We appreciate you being upfront,” Kay Wilson told the engineers. “I think it’s definitely needed.”

Four people stopped at the community meeting, including the treasurer at Central Church of Christ and an official with the VA hospital. Deborah Young, the city’s project manager, said a restaurant owner on Brenner Avenue inquired how their parking lot would be impacted.

The city also plans to add sidewalks on Monroe Street through the Community Development Block Grant Program in the U.S. Department of Housing and Urban Development.

The city council awarded a contract with engineering firm Withers Ravenel, which is in charge of design, in March 2019 for $157,708. City engineers will give the feedback to Withers Ravenel and the firm will move it to a 60% design phase.

The project then needs approval from DOT. If funding is available, the city will ask for right-of-way authorization to begin acquiring needed property.

Brindle expects the sidewalk project, with the turn lanes, will take six to nine month once it gets started.

Those that couldn’t attend the community meeting but want to give their input or ask questions, can contact engineer Dana Ruth at 704-638-2176 and dana.ruth@salisburync.gov.