UPDATE 1:30 p.m.: Bobby Ray Aderhold was located in China Grove by Rowan County Sheriff’s deputies, and is in good condition.  He has been removed from NCIC.  Thanks to everyone for your assistance.

KANNAPOLIS — The Rowan County Sheriff’s Office is requesting assistance in locating a runaway juvenile who was last seen at about 4 a.m. on Sunday. 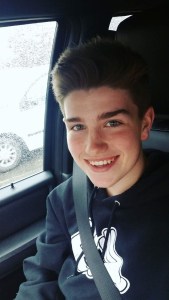 His father said he was gone when he went to wake him up at 10:30 a.m. Sunday.  Bobby left a note  and did took additional clothes with him.  His father said the 16-year-old called at 5:15 p.m. Sunday to say he was OK, but advised he was headed to West Virginia.  His mother said Bobby was active on Snapchat.

He has been entered in the National Crime Information Center (NCIC) database as a missing juvenile.  Anyone with information should call 911 to advise law enforcement.