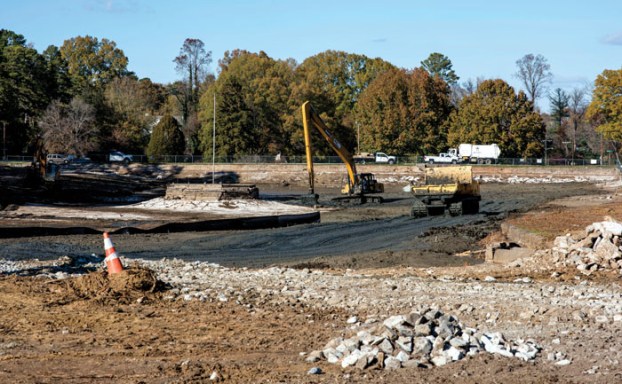 Crews from Dragonfly Pond Works use heavy equipment during the dredging process at the City Park Lake in November. Jon C. Lakey/Salisbury Post

Ask Us: What’s the status of City Park Lake work?

SALISBURY — City Park Lake may still be a nearly empty, muddy pit, but city staff say the project is moving along ahead of schedule.

The lake is the subject of an overhaul started last year. That work is being supervised by the Salisbury Public Works Department. Already, the lake has been drained and dredged. Public Works Director Craig Powers said crews have also repaired the lake’s dam, which included items like injecting structural foam.

But a reader wanted to know what’s next after a relative lack of work lately and February rain storms that temporarily filled up the lake.

Powers said the project is ongoing and ahead of schedule because of good weather during initial work.

“Originally we expected this project to be completed later this summer but we’re hoping to complete it much sooner,” he said.

“Much sooner” means before July 1, as Powers said Public Works is hoping to get lake-specific work done before the start of the 2020-2021 budget year.

Improvements to stormwater infrastructure upstream from the lake will begin within the next two weeks, after materials for the project arrive, he said. Those upgrades will help prevent the build up of sediment that led to a shallower-than-desired lake and growth of aquatic weeds, he said. Also helping to avoid future build up of weeds is dredging of the lake, which dug out built-up sediment and some of the lake bed in shallower areas.

“At this point it’s hard to tell when everything will be completed due to recent rains and how fast everything will dry out but everyone is working hard to accelerate completion of this project,” Powers said.

Powers said Public Works plans to build a pier in the lake for which it’s currently working to obtain permits from Rowan County government.

Plans also include new trees around the lake and grass to help with erosion.

By Liz Moomey liz.moomey@salisburypost.com SALISBURY — Attendees of the Kiwanis Pancake Festival come for the pancakes and stay for the... read more