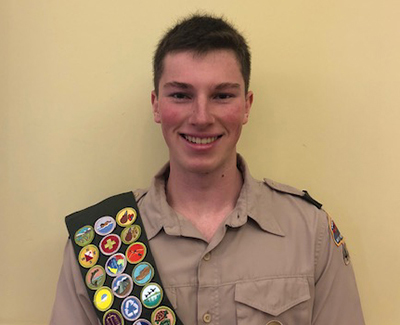 Ian Thomas Walser, 18, received his Eagle Scout award on Sunday, February 2, 2020, at First United Methodist Church of Salisbury. The award was presented by his Scoutmaster, David B. Wilson.

Ian earned 26 merit badges and his Eagle award was presented with a Bronze Palm in recognition of this extra achievement. He also earned the God & Church award. Ian completed Introduction to Leadership Skills for Troops (ILST) and National Youth Leader Training, and later served on the staff for ILST. He served Troop 442 as an Assistant Patrol Leader, Patrol Leader, Senior Patrol Leader and Instructor. Ian completed two 50-Miler awards–one for canoeing, as well as one for backpacking at Philmont Scout Ranch in New Mexico. Ian is a member of the Order of the Arrow. He earned the National Outdoor Adventure Award for Camping and the World Conservation Award. Along with other members of Troop 442, he participated in a National Public Lands Day project for several years, cleaning trash from the Yadkin River.

A graduate of Salisbury High School, Ian was a member of Crosby Scholars and was a STEM Scholar. He was a member of the Varsity Tennis Team. He is presently a Freshman at East Carolina University. Ian is a member of First United Methodist Church of Salisbury, where he served as an acolyte and participated in the youth group.

For his Eagle Scout leadership service project, Ian led a team of volunteers to build a gravel trail connecting the tennis courts and the practice track at Salisbury High School.

Ian is the son of Jason and Tracy Walser of Salisbury.