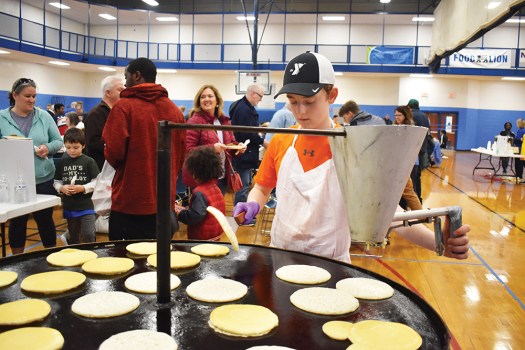 Ayden Reinholz flips pancakes at the annual Kiwanis Pancake Festival, the main fundraiser for the organization. 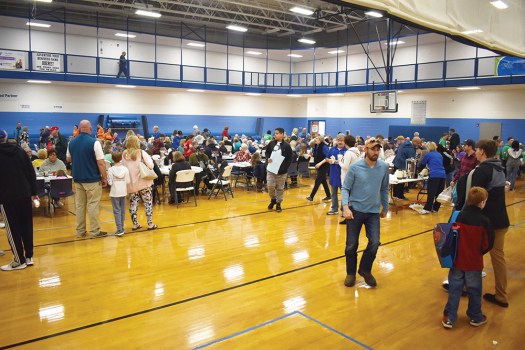 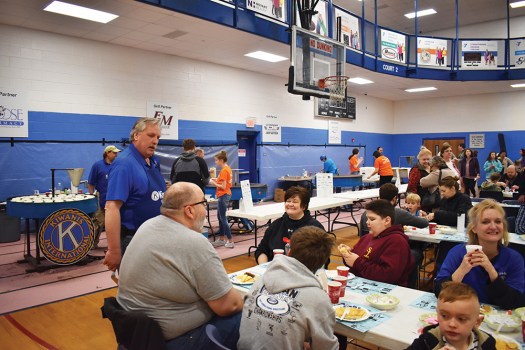 The Snyder family eats pancakes and talks to Glenn Taylor, the Kiwanis president, at the Pancake Festival Saturday night.

SALISBURY — Attendees of the Kiwanis Pancake Festival come for the pancakes and stay for the people at the annual fundraiser.

In its 63rd year, it has grown at the J.F. Hurley Family YMCA. The hundreds of people who come Friday night and Saturday morning eat a plate full of pancakes and sausage from Frank Corriher Beef and Sausage help raise $30,000 to allow Kiwanis to support its mission: “improving the world, one child and one community at a time.”

Dick Franklin, chairman of the pancake committee, said the Kiwanis Pancake Festival has been a community event for years and years. He remembers coming to festival with his now-grown kids at City Park Recreation Center on Lake Drive. The festival, which began in 1957, stayed at that center before moving to the Salisbury Civic Center in 1986. In 2004, the Hurley YMCA became the host.

Besides helping with the Kiwanis event for years, Franklin has been a pancake fan for years, too. He recalled a restaurant serving unlimited pancakes and coffee for 69 cents in college.

But the Kiwanis Pancake Festival is a special event, even for those who don’t like pancakes.

“A lot of people come to sit around the table and talk to friends they haven’t seen in a while,” Franklin said.

Kiwanis Club President Glenn Taylor said the festival is a big social event that people come “to see who’s eating pancakes.” For Taylor, his favorite part is seeing people for possibly the only time that year.

Tyler Weant is one of them. Weant has served as the president of Kiwanis and grew up in Rowan County. He moved to Florida when his wife went to dental school and now lives outside of Atlanta. He drives every year to attend the Kiwanis Pancake Festival and see old friends.

“It’s the people, more than the pancakes,” Weant said.

Weant says he feels a sense of community and family here.

“After moving about the country, the people here are more hospitable and friendlier than other cities,” Weant said.

Weant said it’s good to catch up with people like Shelia Igo, owner of Graystone Salon and Spa, and Jason Walser, executive director of the Blanche and Julian Robertson Family Foundation.

The Snyder family has been attending the festival for about five years. Amy Snyder said it’s a nice way to be a part of the community and support a good cause.

Taylor said his favorite aspect of the festival is to showcase what Kiwanis stands for.

“We’re dedicated to improving our community one child at a time,” Taylor said. “Everything we do, every dollar we raise for our charities goes to benefit the children. It’s community wide.”

Kayla Swicegood, a senior and key club member at North Rowan High School, has been volunteering since she was a freshman either bussing tables or spreading the word. It gives the club an opportunity to give back when their funds are low and for her to meet people at the other schools and in the community.

Key Club advisor at Salisbury High School Sallie Pittman said she enjoys watching the student volunteers grow. Their first year the students are leery about the festival and then over the years the festival becomes something they look forward to.

Pittman helps bus the tables but she often ends up staying at a table to chat.

“It’s just fun because so many people come out in the community,” Pittman said.

“I wander around and I talk to people just to see how they are doing,” Franklin said. “It’s good for all of our clubs to put our name out there. It’s good for our charities because we’re able to make money for that. We’re just thankful for people to come out and support us.”

Kiwanis sponsors a Rowan Little League team. They provide food for the Special Olympics, among other service projects in the community.