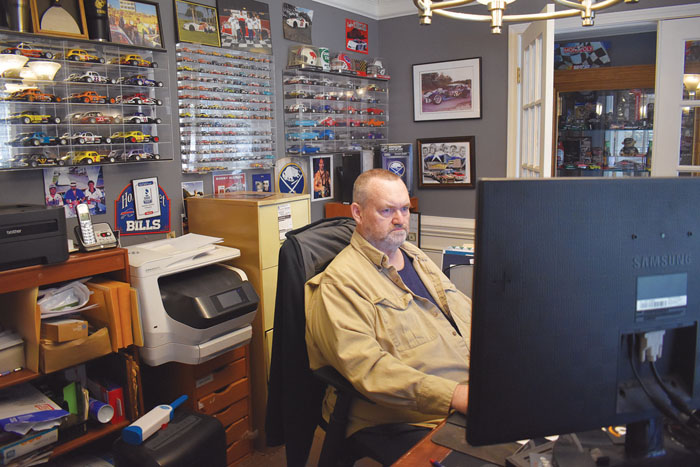 Natalie Anderson/Salisbury Post — In 1979, Ronnie Wetzler took over his father's business, Olympic Drywall, which was founded in Buffalo in 1955. Wetzler moved to Salisbury in 1997 and has been serving the community with drywall services since.

SALISBURY — One drywall business has served the local community since 1997, but it had even earlier roots in Buffalo, New York, and Port Charlotte, Florida.

Founded in 1955 in Buffalo, Ronnie Wetzler of Olympic Drywall took over his father’s business in 1979 and moved the company to Florida. He sold the business — with the exception of the name — in 1990 and moved to Salisbury to “semi-retire.”

But in 1997, Olympic Drywall was back, and it’s become “well-known in construction around here,” Wetzler said.

“I just wanted one house a week to keep myself busy because I’ve never been one to sit still,” he said. “All the (local) builders wanted me on the job, and they said, ‘Why don’t you start your own business?’ And I said, ‘I’ve already been up and down that road.’ ”

Then he talked to his wife, Vickie, who said, “Let’s do it.” Vickie is the registered owner of the business, and Ronnie said he’s a consultant.

“They call us and it’s done right the first time,” Ronnie said.

The name involves a connection Ronnie has with sports. His father began auto racing in the late 1950s, and Ronnie helped him before getting into racing himself in 1979. In 1990, he said he won a race at Desoto Speedway — which has since closed — in Florida.

And along the way, Ronnie made friends with athletes, including professional wrestler Lawrence Wendell Pfohl, who’s better known as “Lex Luger.” They bonded at church over their love for the Buffalo Bills, which ultimately led to Lex Luger giving Ronnie a No. 12 jersey from former Bills quarterback Jim Kelly — a jersey that Kelly wore in a playoff game, he said.

Among those subcontractors is 35-year-old son Ryan, who expects to take over the business eventually. He’s been involved since he was 16.

Ronnie said Ryan and his friend Frankie are “two of the best finishers around here,” adding that “everyone wants them on the job.”

“I supply all the materials, all the labor,” Ronnie said. “I get to use what I want to use that way. I know what works and what doesn’t work.”