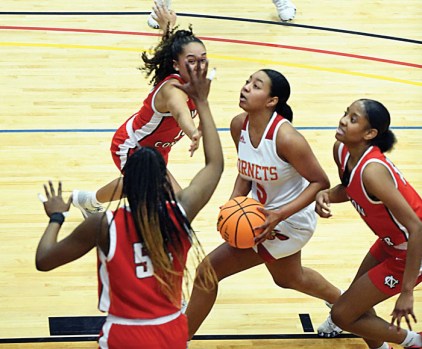 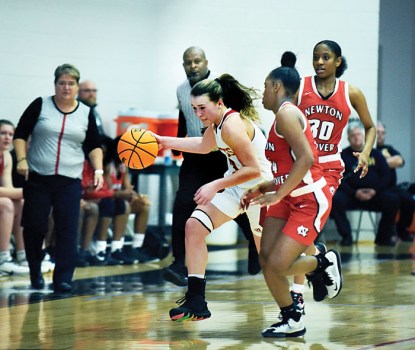 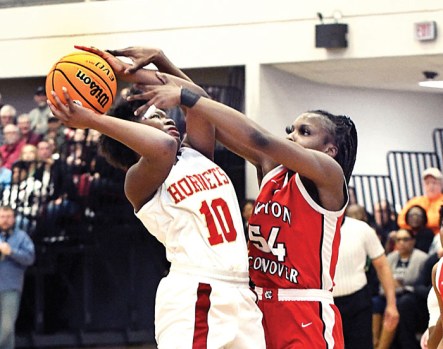 SALS' Jamecia Huntley 10 (had to change jerseys from 21 )and NC's Chyna Cornwell 54. photo by Wayne HInshaw, for the Salisbury Post 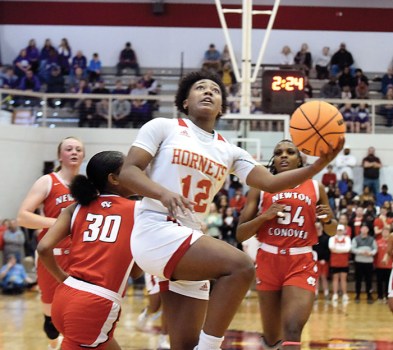 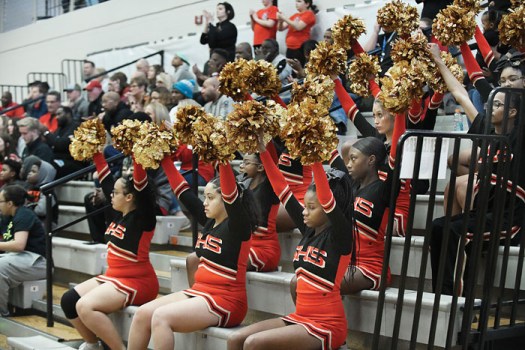 SALS' cheerleaders photo by Wayne HInshaw, for the Salisbury Post 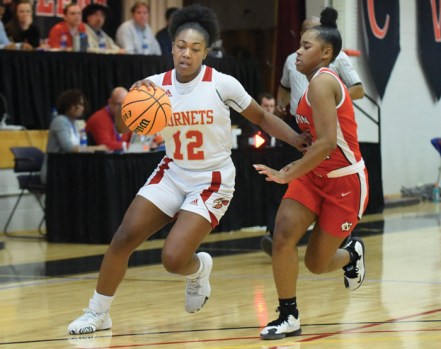 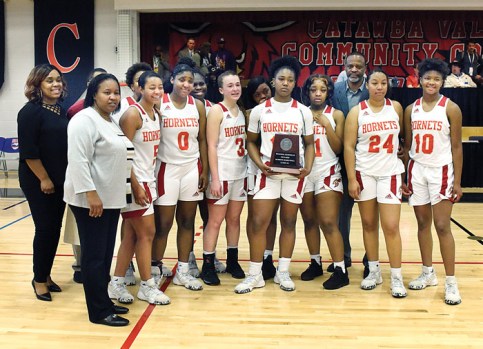 SALS' girls and coaches with their trophy. photo by Wayne Hinshaw, for the Salisbury Post 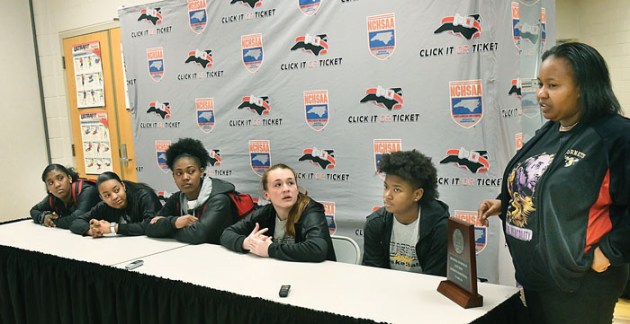 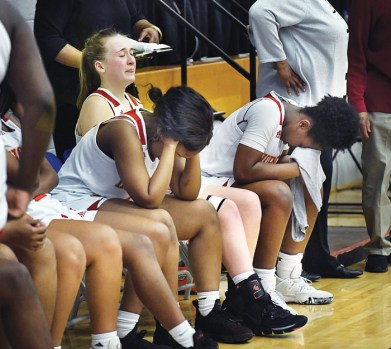 SALS' players after a hard lost. photo by Wayne HInshaw, for the Salisbury Post

HICKORY — The bell has tolled for Salisbury’s girls basketball team.

A sweet season that extended through 29 victories and a 21-game winning streak is over, leaving only the slightest unpleasant aftertaste.

“I’m sad, but at the end of the day, we did what we had to do,” senior Anayia Fulson said at Catawba Valley Community College, where the Hornets were ousted, 65-53, by Newton-Conover in Saturday’s 2A state semifinals. “We tried our hardest. We all went off each other. We all looked up to somebody and connected as one.”

“I thought they did the job and fought hard,” SHS coach Lakai Brice told a small group of post-game reporters. “It’s not the outcome we wanted, but we fought hard. We’re a team of young players who aren’t young anymore.”

The triumphant Red Devils were paced by 6-foot-3 post player Chyna Cornwell, a low-slot terror who was incredibly efficient from close range. A Rutgers-bound senior, she imposed her will on the Hornets and filled the scoresheet with 26 points, 17 rebounds and seven blocked shots.

“Even when we forced them to take outside shots, she went and got the rebounds,” said Brice. “They got a lot of second-chance points. That’s one of the things we discussed, but she still got her points. Just a tough matchup.”

The explosive Cornwell finished with 11 field goals — all but one came on a layup — and was a disruptive force on defense.

“I would do anything to help my team to pull out the win,” Cornwell said, matter-of-factly. “It’s nothing individual, nothing to make me look good or feel good. It’s the team that wins. We knew we had to work the ball inside, make smart passes and knew what to do at the right time. And that’s what we did.”

Salisbury was led by freshman guard Kyla Bryant, who stuck four 3-pointers and netted a game-high 27 points. Fulson added 15 and freshman Jamecia Huntley scored eight. On the flip side, teammate Rachel McCullough, a 5-7 sophomore with an accurate shooting eye, was well-defensed and had no baskets.

“I really didn’t feel comfortable until the final buzzer sounded,” said winning coach Sylvia White. “But I can’t say enough about our never-say-die mentality. By the time we got to the fourth quarter, we had three seniors on the floor — and they all knew what they had to do.”

Salisbury had just one senior — Fulson.

Only three points separated the teams as the fourth period launched, but the Devils began pulling away following a three-point play by Jahlea Peters and an authoritative stick-back by Cornwell. The lead bulged to 53-44 when N-C junior Grace Loftin took an underhanded feed from Cornwell and hit a backdoor layup with 3:52 remaining.

“We knew we had a height advantage,” Loftin said, after totaling 20 points, “so we knew we could beat them inside.”

Salisbury attempted a comeback — Bryant’s 3-ball from the right wing narrowed the deficit to six points — before Newton-Conover used a 7-1 run and a Cassidy Geddes’ free throw to go up, 60-48, with 1:02 to play.

“Even then, there’s never a minute or a second in any game when you can relax,” Cornwell said. “It has to be a consistent run, because you never know what your opponent is going to do. We had to keep pushing, keep going.”

When it ended, Salisbury — to its credit — was reaching for answers rather than excuses. The Hornets were gracious in defeat.

“They took away our second chances and our rebounds in the middle,” said McCullough. “Usually, we start in the middle and use that to push our offense. But we just had trouble getting in there and getting rebounds, even though we were fighting for every ball.”

Brice agreed, but chalked this loss off to too-much-Cornwell.

“We tried to make it uncomfortable for her,” the coach said. “But she’s a great player. This is what you get when you have good, young players who believe in themselves.”

And then, with a casual wave, Brice offered a final testament. “We are young,” she said, “but we’ll be back.”

NOTES: The loss was Salisbury’s first to a 2A team. Its only other setback came last Dec. 27 to 3A West Rowan. … Newton-Conover used just five players. The Red Devils, who won their 20th straight game and 27th in their last 28, converted 11 of 13 free throws in the fourth quarter. … N-C led by 12 points on three occasions. … Salisbury led for only 31 seconds in the opening moments, when Fulson’s 3-pointer from the right side gave the Hornets a 3-2 advantage. … Fulson’s 15 points gave her 1,381 career-wise, falling 17 points short in Salisbury history of her mother, Sheree Gillespie (1,398). … Huntley began the game in her usual No. 21 jersey but finished the game wearing No. 10, due to blood on her shirt. …  In a show of team unity, Brice brought all five of her starters to the post-game press conference.