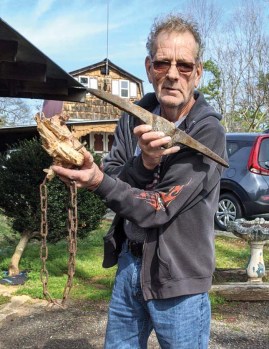 Submitted photo Kenneth Miller of Rockwell shows off what he found as he was splitting a load of pecan logs from a tree-cutting in downtown Rockwell. Miller found a the head of a mining pick-axe and an old chain. 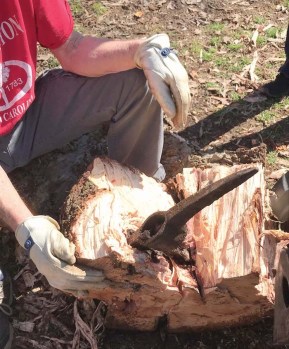 Submitted photo This is how Ken Miller found the pick in the piece of pecan tree he was splitting for firewood. 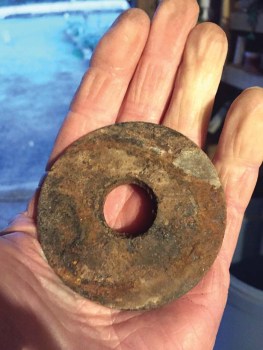 Submitted photo Ken Miller found this washer on an old chain embeded in a peacn tree. 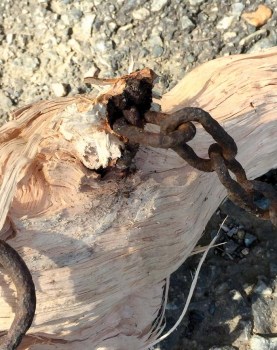 Submitted photo This is how Kenneth Miller found an old chain embedded in a piece of pecan tree. 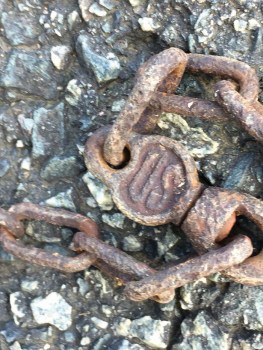 Submitted photo A detail of the chain Kenneth Miller found embedded in an old pecan tree. He thinks it might be US on the chain.

ROCKWELL — Kenneth Miller, who has lived in Rockwell for 33 years wasn’t expecting anything unusual when he and his cousin, Jimmy Furr, offered to take some wood off a lot in the downtown area.

Lee Godfrey had taken down several old pecan trees on the site to make way for development. A man promised he would come get the wood, but he never showed up.

Miller noticed it and asked Godfrey if he could help. He needed some firewood.

“I’m retired from driving a truck, and I wondered about getting a little firewood out of that,” Miller said. “Me and my cousin have some health issues, that’s why the two of us made one good man.”

They hauled the wood away and were using his cousin’s wood splitter to break up the logs, working for what they say was a total of 10 days sawing and cutting it up.

That’s when Miller noticed the head of the pick sticking out of a piece of the wood. Had that metal hit the splitter, it would have made an awful mess. Miller was pretty surprised.

“It was like a prize in the Cracker Jack,” he says.

Then, he found a rusted old chain with a large washer also embedded in the wood.

“Who knows how long that was there. I’m guessing its pre-Civil War,” Miller said.

They also found a piece of a porch.

He’s done some research on the pick to determine it was probably a miner’s pick, like they used in Gold Hill’s mining days.

He cleaned it up as best he could with a wire brush, but it just has some number on it and not much more.

He lucked out on getting a brand-new, 14-year-old wood splitter, too. He went to Lowe’s to price them, then heard about someone who had a splitter for sale. It had been put together 14 years ago, but never used. He got it for half the price of a new one.

“I imagine I got two or three winters of wood once I get it split. My cousin has as much or a little more.”