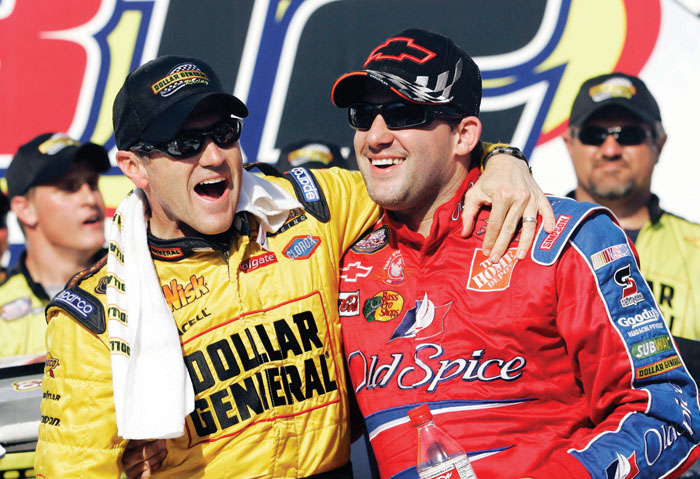 FILE - In this April 28, 2007, file photo, Bobby Labonte, left, and Tony Stewart, right, celebrate Labonte's win in the NASCAR Busch Series' Aaron's 312 auto race at Talladega Superspeedway in Talladega, Ala. Joe Gibbs, already an NFL Hall of Famer, will be inducted into the NASCAR Hall of Fame alongside Tony Stewart and Bobby Labonte, two drivers who helped him build one of NASCAR’s top teams while giving “Coach Joe” three of the organization’s five titles. (AP Photo/Rob Carr, File)

INDIANAPOLIS (AP) — Smoke is hoping to kiss the bricks one more time.

The 48-year-old Indiana native has competed in 18 Brickyard 400s, five Indianapolis 500s and four IROC Series races at the famed track. He is a two-time Brickyard 400 winner (2005, 2007) and a member of the Indianapolis Motor Speedway Hall of Fame. He retired from full-time NASCAR racing after the 2016 season.

“Everyone knows what Indy means to me, so I can’t think of a better place to race on Fourth of July weekend,” said Stewart, who grew up 45 minutes from Indy. “The date is already circled on my calendar.”

Stewart has eight road-course wins in the Cup Series, trailing only Jeff Gordon, and notched his 49th and final career victory in 2016 at Sonoma Raceway in California.

“People sometimes say, ‘We miss seeing you behind the wheel,’ and I’m like, ‘Well, you’ve just got to go to different places now,’” said Stewart, who has 23 wins in an assortment of sprint car races since retiring as a full-time NASCAR driver. “I’m racing 100 times a year in a sprint car, but seeing some of these road-course races – especially the Roval at Charlotte – piqued my interest a bit. … All of it has led me back to the place I’ve always called home – Indy.”

IN THE PITS: BOWMAN MAKES CASE TO KEEP HIS HENDRICK RIDE

CHARLOTTE (AP) — There is a strong crop of drivers headed into free agency this summer and Alex Bowman has hardly been at the top of the list.

Brad Keselowski is a former Cup Series champion, Kyle Larson is considered the future of NASCAR and Ryan Blaney is poised for a breakout season. Erik Jones is determined not to be the lowest-performing driver at Joe Gibbs Racing, while Corey LaJoie is among a handful of young drivers desperate for a chance to drive competitive cars.

Bowman used to be in LaJoie’s situation, a group of second- and third-tier drivers routinely passed over by the top teams. They settle for underfunded teams, often have to bring their own sponsorship, don’t make much of a salary and never have a fair shot to win each week.

“Every year is a contract year. Every year of my life in the Cup Series has been a contract year,” Bowman said. “I’ve had contracts and two weeks before Daytona read a tweet that said I’m not going to Daytona.”

His break came in 2016 when the 22-year-old took his first big step away from driving bad race cars. Bowman patched together nine Xfinity Series races with Dale Earnhardt Jr.’s team and was available when Earnhardt was sidelined for a long portion of that season with lingering effects from multiple concussions. Hendrick Motorsports called Bowman for 10 of those races and he grabbed the first pole of his career and notched three top-10 finishes as a substitute.

Bowman again refused slow cars all of 2017. He ran just three times all year — one Truck Series race, twice in the Xfinity Series and nothing at all in Cup — and practiced his craft on simulators while waiting to be considered for a seat in a car that can actually win.

His plan worked to perfection when Earnhardt retired after the 2017 season and Rick Hendrick gave Bowman the No. 88 Chevrolet.

But going into the final year of a three-year contract, Bowman understood it was going to be a struggle to keep that seat considering how many drivers will be available at the end of the season. Hendrick already needs a driver to replace seven-time champion Jimmie Johnson when he steps back from a full schedule.

So Bowman opened the year determined not to lose the No. 88.

He qualified second for the Daytona 500, might have had a chance to win last week at Las Vegas if not for a late caution and then finally made his way to victory lane Sunday in California with a dominating run. It was Bowman’s second career Cup victory in 156 starts, both in the Hendrick Chevrolet, and first opportunity to convince his boss he wants to keep his seat.

The victory locked Bowman into the 16-driver playoff field just three weeks into the season. He is the first Hendrick driver to win this year and the first to win in the new Chevrolet Camaro. The car struggled through two seasons after its introduction and Chevrolet was shut out of the championship finale both years. NASCAR allowed the manufacturer to make changes prior to this season and Bowman led three Camaros in the top four at California.

“When Chevrolet said they’re going to commit to working hard to try to improve the body, that put a sense of morale throughout the whole shop, throughout the whole team, a lot of positive attitudes toward it,” said crew chief Greg Ives. “We need to take that positive momentum of the hard work Chevy put in and we needed to put that to results on the racetrack, whether it was top 10, top 5’s.”

Running well early in the season is the boost Ives needs for his driver and crew. The struggle with the Camaro since 2017, plus the retirements of Jeff Gordon and Earnhardt, knocked Hendrick Motorsports down a peg. While Joe Gibbs Racing won a record 19 races last season and the title, Hendrick drivers won just four races and three were by Chase Elliott.

“It’s great to have the win, but continuously building that momentum is something that is needed in the shop environment,” Ives said. “It’s needed when the guys turn on the TV and they see the racing we had and their product was on the racetrack competing. It’s a totally different vibe, totally different feeling.”

Does the early season win give Bowman any leverage in contract talks with Hendrick?

Ives answered for him: “No, he’s going to need multiple wins, so we’re going to work on that.”

Bowman laughed at his crew chief, then admitted there is more work to be done the next 33 weeks.

“I’m as motivated as ever, doing everything I can to try to be the best on and off the racetrack as I can be,” he said. “Hopefully we can make that happen. It is a contract year, but honestly every year of my career has been a contract year, so it’s not much different.”