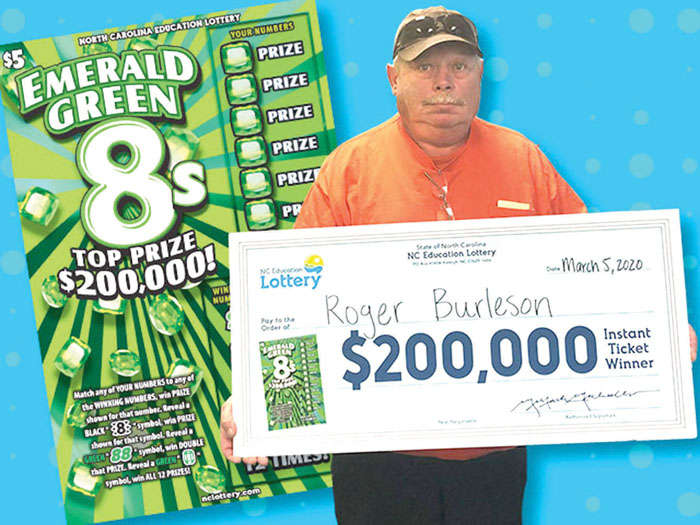 RALEIGH – For Roger Burleson, of Rockwell, a quick stop before work “finally paid off” with a $200,000 lottery win.

“It’s First Tuesday week,” said Burleson. “I always try to buy a couple of the new ones.”

Burleson’s opportunity came on Wednesday morning when he had some free time before work. Knowing new scratch-offs had just come out the day before, he decided to stop by Charlie’s Market on Faith Road in Salisbury and try his luck on the new Emerald Green 8’s ticket.

Burleson said he bought a few tickets like normal and walked back to this car. Standing in the parking lot, he started scratching.

“I was about halfway through the ticket,” Burleson recalled. “I wasn’t thinking anything of it. Then, I saw the first zero and thought, ‘Heck yeah, that’s $20.’ Then I saw the third zero, ‘Alright, that’s $200 now!’ When I saw the fourth zero, I started to get excited. The zeroes just kept on coming.”

Burleson claimed his prize Thursday at lottery headquarters in Raleigh. After required state and federal tax withholdings, he took home $141,501. Burleson said he knows the first thing he will do with the money.

“I’m first going to buy myself a little pick-up truck,” he said. “Then, I am going to pay off my sister’s car. She just bought it a month ago.”