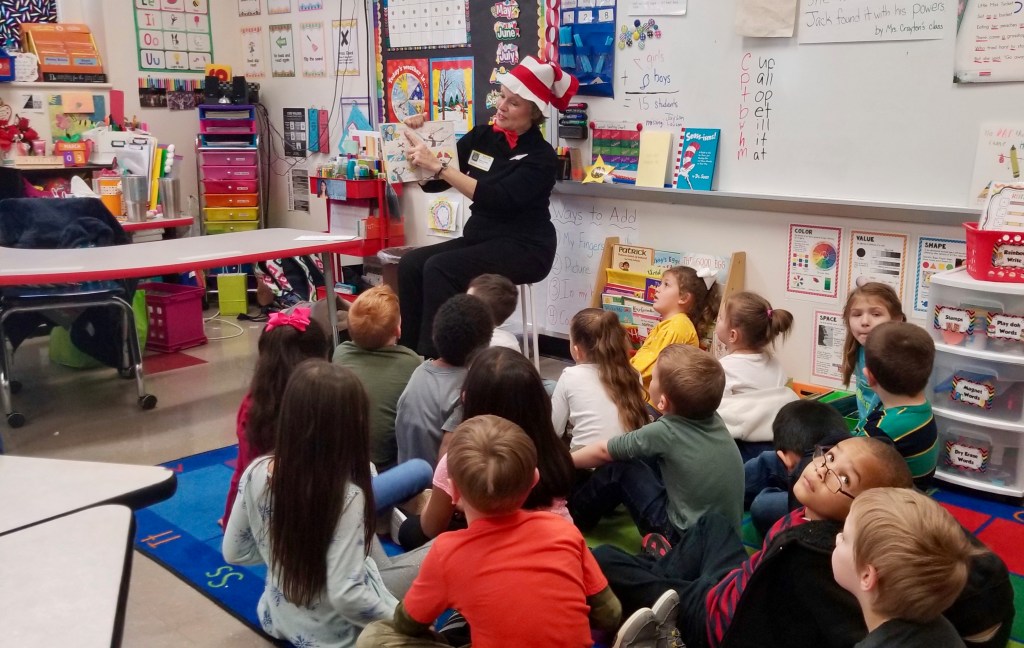 Carl Blankenship/Salisbury Post – Nancy Sloop reading to a kindergarten class at China Grove Elementary on Tuesday. There were 47 books given to elementary classrooms in Rowan County.

The books, donated by the Elizabeth Maxwell Chapter of the Daughter of the American Revolution, each came to the class with a DAR member to read through then with the kids. On Tuesday afternoon, DAR member Nancy Sloop was reading Seuss’s “In a people house” to Christina Crayton’s kindergarten class at China Grove Elementary school.

Sloop is a retired music teacher, and she went through the book slowly, making sure students understood its contents and working a bit of sound into the lesson. There is a crashing noise in the story, and Sloop had kids all come up with their own crashing noise to make on their bodies to go along with it.

“I taught school for 30 years, I taught music in Cabarrus County Schools. I love to read and I think children need to be read to as much as possible,” she said.

Some of the readers have visited multiple classes and others only did one reading. Some dressed up for the occasion as well. Sloop was wearing the signature red-and-white-striped hat worn by the Seuss character Cat in the Hat.

The readings also coincided with spirit week, with students wearing pajamas and other fun attire on different days of the week. It was silly socks day at China Grove when the DAR visited.

This was one of 10 readings at China Grove. There are 15 scheduled for North Rowan, one at Knollwood, 15 at Mt. Ulla, five at Hanford Dole, four at Hurley Elementary, one at Isenberg and one at North Hills Christian School. North Hills is private and not part of Rowan-Salisbury Schools.

The books were assorted titles by Seuss, with a total value of about $500, given to each classroom. Students in those classes are also entering a contest. For grades K-2, students are drawing their favorite character from the books. In grades 3-5, students are writing book reports of their favorite story.

DAR Chapter Regent Sandra Czuba said the reading series was created to coincide with Seuss’ birthday on March 2, and the organization had a great response from schools. The idea, and the books, came from Linda James, another DAR member.

Seuss’ real name was Ted Geisel, and he published more than 60 children’s books during his career. Geisel was also a political cartoonist and worked on films. He died in 1991. His books range from simple reads intended for young children to allegorical works with commentary on social and political issues.

Some of his most famous and well-loved books have the boldest commentary. “The Lorax” is an environmentalist work that is critical of consumerism and “How the Grinch Stole Christmas!” which has been adapted into several films, is critical of the materialism of the contemporary Christmas holiday.

The DAR is a nonpolitical women’s service organization